Though there are complicated HR practices, compensations, formalities and more, good looks are something that still matters for anyone in an interview.

It is a fact that people who look good are attractive and get promoted faster, gain money and are quickly selected.

Expert Catherine Hakim, who is a professor at the London School of Economics, mentions that lawyers who look good earn 10 to 12% more than the less good looking colleagues.

In the same manner, she also says that an attractive person is the one who lands a job more quickly and also gains promotion.

Physic and appearance are thus essential factors which add marks in an interview session. Here are a few pointers that mention if good looks help in an interview. 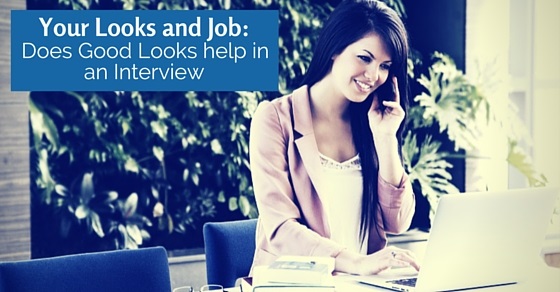 Do Looks Matter in Interviews?

A study conducted by the University of British Columbia, mentions that the personality traits of people who are physically attractive to be more accurate than less likely people.

Another study conducted by Lauren human, Jeremy Biesanz and Genevieve Lorenzo also favored their research towards a positive side. Jeremy mentions that though an attractive employee organizes and generous to some extent, people would conclude that the employee very organized and more generous since the employee is attractive.

Researchers mention these aspects because people are more attentive to those who are beautiful.

A study which was conducted by the Juke university researchers found that looks were considered as an important factor for a CEO to be marked as competent. Their appearance was the main factor that fetched them higher income.

The Tufts University of researchers used the facial photos of CEO’s to examine their dominance, likability, competence, maturity, and trustworthiness.

In the same manner, it finds by the researchers of Wisconsin University that CEOs with wider faces performed well than ones with narrow faces. The researchers thus came up that looks are important for any candidate in all aspects of a career.

3. Good looks for an interview:

A survey conducted by Ben-Gurion University in the year 2010 concluded that an average candidate is required to send resume multiple times than a good looking candidate.

Employers conclude that men who post their photos are confident one. To land an interview, looks are very important.

4. Weight of a candidate is also considered:

When discoursing about looks for an interview, weight also matters and adds to your looks. Employers do not desire to employ a fat employee as they have many assumptions.

Fat people are considered that they lack self-confidence and motivation. Also, employers think that fat people would develop health problems which would cost them more.

Weight is thus an important factor which adds to the looks of the candidate. It says that heavy workers earn less than average weight colleagues.

In an interview, tall candidates consider as ones who are short in height.

In the year 2004, the American psychological association mention in its “journal of applied Psychology” that taller employees pay more than short ones.

This is because taller employees believe to be more commanding which is mandatory for management positions.

Taller people consider social interactions as they have more confidence.

6. Looks are more important for many jobs:

There are a few categories of jobs by which look given the main importance.

Customer service, air hostess, sales and lot more are some jobs that require a candidate with good looks as they interact with the customers directly.

The employees need to sell something or lure in customers and hence good looks are mandatory and thus ones with good looks recruited.

7. What you wear adds to your looks:

What you wear for an interview is something important and adds to a great part of the interview.

Clothes add a good look to a candidate. Candidates who wear good formal dressing always get a good score in the interview.

Formal shirts and pants can be the right choice for men and women can wear formal trousers or skirts along with a shirt. This offers a good look and hence you can score more marks in an interview.

The color of attire you wear for an interview also adds to your look for an interview. In that aspect, blue gives priority where blue conjures up trust, stability, security, confidence, and truth.

The next suggest color would be a gray color which considers a cool color to wear for an interview.

Gray presents that they are focused and sophisticated.

Black is the next in the series which presents authority for a person.

In the series, red fall next which shows energy, aggression, power, passion, and desire.

Last but not least white is always the best and safe color to use which presents cleanliness, simplicity, and goodness. Hence the color you choose for an interview also adds to your looks.

It is important to shake hands in an interview at some point, so the candidate should check out for their fingernails.

Do not be a slouch and keep your posture straight with confidence. The most important aspect is to keep your hygiene impeccable. All these add to good looks which helps you in an interview.

10. Why grooming is important:

The managers hiring decision-based on the grooming part of the candidate rather than other aspects which mention by the 2006 national association of colleges and employers outlook.

With the survey made, about 73% of employers mentioned that grooming is a vital aspect for an interview and 21% of employers say that they have just slight influence.

About 6% say that they do not influence at all. When a candidate groomed well it presents that the candidate values the professional image and would take a job seriously.

Grooming is mandatory in a professional work environment as candidates need to interact with customers.

Your appearance should be in a manner that supports your overall impression as a professional. Any feature which gains you a negative impact avoided.

Some of them are funky hair, visible tattoos, body piercing, and jewelry can be avoided. All these will avert you from getting a job.

The hiring managers’ decision is also based on their looks which include all the above. Do not show your individuality and style in an interview.

In the same manner, a recent study by Harvard University, Boston University, and also the Dana-Farber cancer institute has found that women who wear on more make-up are said to be more competent than those who do not.

People’s perceptions enhance with make-up with the likability and rustiness of women. Hence looks which support and makes you look professional is vital.

Fashion may change and new trends may come in but the professional style is always the same and does not change. Hence dressing up professionally is mandatory to obtain a job in an interview.

By running through these points you can be sure that for an interview looks are important and can help you get a job. In a job interview, you should know to present your skills and professionalism.

The above-mentioned studies and researches have proved that good looks are important in a job interview as well as in an organizational career to enhance in the future.

So along with skills and knowledge grooming for good looks is also an important move to step forward in a career. Candidates who are unaware that looks are mandatory for career achievement can run through these points and benefit.

Women at Work: How to Attract, Source and Recruit Women

29 Best Workout Clothes You Can Wear to Work Anytime

How to Wear Pantyhose to Work? The Ultimate Stockings Guide

How to Wear Floral Pants to Work and Look More Stylish

How to Wear Midi Skirt to Work: The Complete Fashion Guide

How to Wear Skinny Jeans to Work: Casual-Friday Outfits Tips