The woman has driven economic growth to a greater extent during the past few decades. Their individuality and skills have increased incredibly and are likely to increase more. A lot of industries like financial services, telecommunication, information technology are been benefited due to the active participation of women at work.

Women are considered to be well socialized, optimistic, artistic and also with good management and multitasking skills. This is the reason that most of the companies prefer women to be their human resources managers.

The era of intense competition for talent and skill had made companies think that they need people who are much creative and innovatory. The company’s workforce also understood that they not only need diversified technologies but also diversified people in their organization. 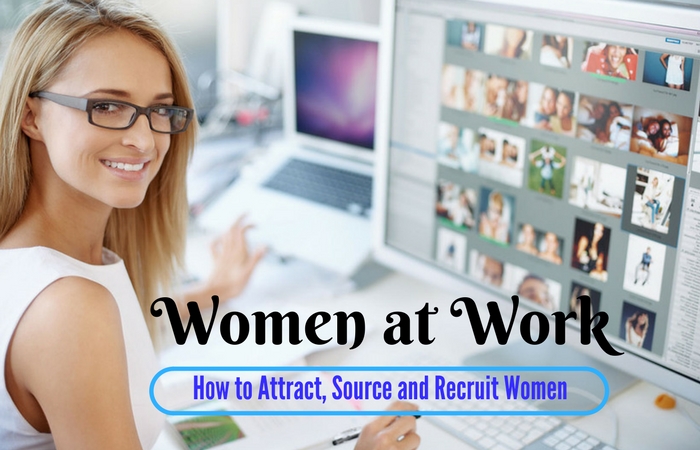 People have recognized the skills which possess in women and have become so skeptical that they desire a certain ratio of employees in the company should be women.

For example, an airlines company chooses only female employees in their recruitment process as they have noticed that they weigh 20kgs less than the men on an average.

Due to this difference, they have analyzed that recruiting women could help in saving millions of rupees of fuel costs. This is one advantage that a company has found to reduce costs. There are concrete benefits obtained while targeting the talent of women.

Thus, the companies have opened doors to hire them and gain profits in their business by making use of the skills of women. Accomplishing this recruitment process needs a few best practices being followed in the hiring procedure.

Commercials are a great way of spreading the brand name of the company. A few minutes of commercial would help to convey a lot of information about the company to the public. It is the most effective way which helps the information reach a large number of people without much trouble.

Even people present in rural areas can view the information advertised using commercials. Thus, advertising with the help of commercials will fulfill the target of reaching a huge number of people.

A good commercial with alluring quotes and pictures of the company help in reaching the hearts of many women. Including small clippings which are related to women equality and mentioning the importance given to women in the organization would help the audience understand the work culture in the company.

The clippings made by the current employees would show much positive impact as the video turns out to be more realistic and reliable.

To make the video reach the next level, an include real-life example might even go viral in a few days.

Focus on the transition which took place in the life of a woman after stepping into the organization. Expose the benefits and the recognition which obtained to a woman, due to the decision of joining the company.

Everyone is aware that the security of women is a breach. There are many initiatives taken to protect women and their security.

It requires to understand that none of those initiatives work effectively now. It is the responsibility of the company to make sure that the security of women is sustainable.

Whenever a company provides this additional benefit called sustainable security to the female employees, it brings the company to limelight and helps the company stay a step ahead from the others.

Conducting campaigns with the support of powerful women known to the public helps to advertise the brand name of the company even better.

Whenever these campaigns are conducted with proper reputation and fame, people get to know that the company is quite concerned about the security of female employees.

Women are most likely to take the number of leaves compared to men. Company has to operate in a way which helps employees to build trust upon the company.

Different policies like work from home, maternity policy which is supportive to women should be strictly implemented. Whenever the policies of companies are implemented perfectly then the probability of getting more applicants is high.

There are already a set of leave policies which were designed specifically for women. Due to the busy and overloaded workflow in the companies, people deny offering leaves to the female employees.

It is required to understand that whatever the work is and how important the work is, the leave policies should be implemented as they are written in black and white.

The employee has all the rights to take the number of leaves mentioned in the leave policy and is not responsible to take the stress due to a few flaws in the implementation of the policies available.

The company needs to understand the requirements and exhibit the policy rigorously so that the women won’t affect due to the practice of leave policy in the company.

4. Form a separate department for women:

It is vital to form a separate department to undertake the provocations on women. Although the human resource manager is responsible to take care of the activities which cause discomfort to women, it is also important that there is a team which is working concurrently and confine to protect the security of women.

It requires to make sure that the department formed is a group of powerful women who meant an ideal example for other women employees.

Motivational, inspirational sessions has to be provided for the uplift of women in the company. This team should be able to inspire and motivate the women employees present in the company.

Though there are no policies which tell to discriminate people based on gender, the rules and policies are just confined to paper and are not kept into action. Formulate new policies to be implemented in the company which makes gender equality rights a reality.

Few people oppose the idea of women being in authoritative positions. They do not tolerate any sort of female dominance in the industry and consider it as a threat to the males in the industry.

Although, women being with good potential and abilities are not been able to reach out to the higher levels due to the discrimination in few places. Without any discrimination in gender, the companies have to employ women in higher authoritative positions when capable.

Companies have to open doors to all sorts of opportunities to women so that women do not hesitate to step into the industry leaving behind the thought of discrimination.

The foremost question that anyone asks before stepping into the company is about the work timings. Bitter timings of the company are the main reason which stops female employees from getting into a company.

The working hours should be comfortable enough for female employees to work in the company. It would be favorable if the odd work timings avoided in the case of female employees.

There might be a few instances that the company might not be able to provide the required timings to the female employees.

Whenever the company is providing unfavorable timings to female employees, it is the company’s responsibility to take off the employee’s safety. Strict policies should be implemented when a female employee is staying late hours.

Implement, as stringent rules as possible to protect the safety of a female employee. Transport facility should be required whenever a female employee is working late hours. It would be much effective if female drivers recruit to help increase the reliability of women upon the company and staff.

7. Reach out to women groups on social media:

There are numerous women’s groups all over and gather at a common platform called social media. It requires to conduct research to gain information about various female associations available.

There are innumerable female associations available for distinct industries. Reach out to the leaders of these groups, in order to hire talented and skilled female employees. The company can focus on the subscriptions for job openings to which women generally apply.

There are also few job portals which specifically meant for women. Companies can even recruit new employees just to get information about female associations and groups available.

8. Focus on places which are frequent to women:

Targeting the places which frequently visited by women helps in the recruiting process. There are many places which just meant for meetings of professional women. Do not overlook any place which is within reach of women.

The companies need to go in search of talent women to distinct places like women colleges, women study centers. Study centers consider as the best place where more number of people get to gather at a single place.

Targeting students is the best way to get a number of employees. The companies can reach out to the desired career background which they expect from an employee.

It is important to understand that rural areas should also be reached. There are talented women all over, it is the patience and efforts of the company that will result in finding suitable and talented women employees.

9. Conduct competitions only for women:

To get skilled women employees, the company needs to target only women and conduct competitions which meant for women.

By starting such an initiative, the company starts to get a lot of exposure from the public and the goodwill of the company increases to a greater extent. Women will start feeling secured about the company and will strive to work for the company.

It is the responsibility of the company to ensure that there is no discomfort and troubles faced by any employee. Harassment should be of zero tolerance and the person who is responsible for the discomfort should be strictly punished. Quick measures have to take so that the same would not be repeated next time.

The company might have succeeded in hiring, the number of female employees with their creative recruitment procedures. There is a chance that all the efforts, struggle, and hard work would go in vain if there are no procedures to retain the hired employees.

The efforts placed in accomplishing the hiring process should also be placed in retaining the company’s employees. The managers have to make sure that the female employees are not facing any troubles in the company.

Regular sessions and meetings should conduct to male employees in order to explain the severity in cases of harassment.

Female Employees should frequently motivated and informed about how to be strong and how to tackle different problems faced by them.

It is vital, that the managers should be able to reach out to the employees whenever they are in need and solve the problem as soon as possible.

The policies of the company have to be strict enough to prevent faults happening in the company. It should not only strict when written in black and white, but they also need to strict in implementing and making the employees understand the importance of implementing.

Preventing the fault from happening is much easier than regretting and convincing the employees later.