Martin Scorsese is an American producer, director, actor, film historian, and screenwriter, who has got a career that spans 50 years and more. This famous director has given us some of the engaging biopic and memorable crime dramas which includes the iconic ‘Taxi Driver’ ‘Wolf of Wall Street’ and Academy Award-winning Masterclass Film ‘The Departed’. 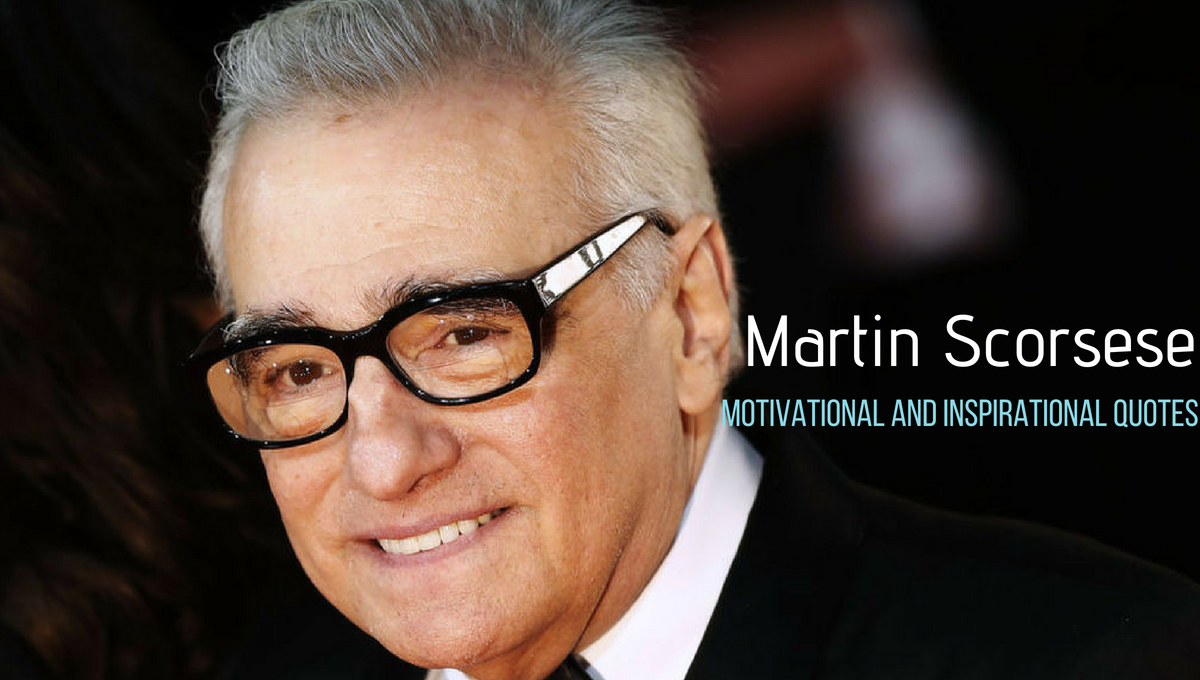 He was most prolific, visionary and influential directors of his generation known for his gritty and meticulous filmmaking. Here are some of the amazing and inspiring quote by the godfather of cinema.

1.” Cinema is a matter of what’s in the frame and what’s out”

2.”Now more than ever we need to talk to each other, to listen to each other and understand how we see the world, and cinema is the best medium for doing this.”

3.“The cinema began with a passionate, physical relationship between celluloid and the artists and craftsmen and technicians who handled it, manipulated it, and came to know it the way a lover comes to know every inch of the body of the beloved. No matter where the cinema goes, we cannot afford to lose sight of its beginnings.”

4.“Popular music formed the soundtrack of my life.”

5.“ If your mother cooks Italian food, why should you go to a restaurant?”

7.“Howard Hughes was this visionary who was obsessed with speed and flying like a god… I loved his idea of what filmmaking was.”

8.“If it’s a modern-day story dealing with certain ethnic groups, I think I could open up certain scenes for improvisation while staying within the structure of the script.”

9.“Every year or so, I try to do something; it keeps me refreshed as to what’s going on in front of the lens, and I understand what the actor is going through.”

10.“I grew up in the Lower East Side, an Italian American – more Sicilian, actually.”

11.“I love studying Ancient History and seeing how empires rise and fall, sowing the seeds of their own destruction.”

14.“Our world is so glutted with useless information, images, useless images, sounds, all this sort of thing. It’s a cacophony, it’s like a madness I think that’s been happening in the past twenty-five years. And I think anything that can help a person sit in a room alone and not worry about it is good.”

15.“Any film, or to me any creative endeavor, no matter who you’re working with, is, in many cases, a wonderful experience.”

16.“Most people have stereo vision, so why belittle that very, very important element of our existence?”

18.“There was always a part of me that wanted to be an old-time director. But I couldn’t do that. I’m not a pro.”

19.“The most important thing is, how can I move forward towards something that I can’t articulate, that is new in storytelling with moving images and sound?”

20.“Alcohol decimated the working class and so many people.”

21.“More personal films, you could make them, but your budgets would be cut down.”

22.“My working-class Italian-American parents didn’t go to school, there were no books in the house.”

23.“I’m re-energized by being around people who mean a lot to me.”

25.“I can’t really envision a time when I’m not shooting something.”

27.“I certainly wasn’t able to get it when I was a kid growing up on the Lower East Side; it was very hard at that time for me to balance what I really believed was the right way to live with the violence I saw all around me – I saw too much of it among the people I knew.”

28.“Hong Kong cinema is something you can’t duplicate anyway.”

31.“It’s interesting that these themes of crime and political corruption are always relevant.”

32.“Food tells you everything about the way people live and who they are.”

33.“A lot of what I’m obsessed with is the relationship and the dynamics between people and the family, particularly brothers and their father.”

34.“Working with HBO was an opportunity to experience creative freedom and ‘long-form development’ that filmmakers didn’t have a chance to do before the emergence of shows like ‘The Sopranos.’”

35.“I’m sad to see celluloid go, there’s no doubt. But, you know, nitrate went, by the way, in 1971. If you ever saw a nitrate print of a silent film and then saw an acetate print, you’d see a big difference, but nobody remembers anymore. The acetate print is what we have. Maybe. Now it’s digital.”

37.“I’ve seen many, many movies over the years, and there are only a few that suddenly inspire you so much that you want to continue to make films”

38.“My whole life has been movies and religion. That’s it. Nothing else.”

39.“I know there were many good policemen who died doing their duty. Some of the cops were even friends of ours. But a cop can go both ways.”

40.“There must be people who remember World War II and the Holocaust who can help us get out of this rut.”

41.“It seems to me that any sensible person must see that violence does not change the world and if it does, then only temporarily.”

42.“It did remind me of something out of Greek mythology – the richest king who gets everything he wants, but ultimately his family has a curse on it from the Gods.”

44.”I think what happened there was just the budget would be too big to build these sets because nothing really exists here in New York of that period; you have to build it all.

45.”I grew up within Italian-American neighborhoods, everybody was coming into the house all the time, kids running around, that sort of stuff, so when I finally got into my own area, so to speak, to make films, I still carried on.”

46.”I always say that I’ve been in a bad mood for maybe 35 years now. I try to lighten it up, but that’s what comes out when you get me on camera.”

47.”I don’t agree with everything he did in his life, but we’re dealing with this Howard Hughes, at this point. And also ultimately the flaw in Howard Hughes, the curse so to speak.”

48.”I do know that some Buddhists are able to attain peace of mind.”

49.”Eradicating a religion of kindness is, I think, a terrible thing for the Chinese to attempt.”

50.”I just wanted to be an ordinary parish priest.”

51.”All my life, I never really felt comfortable anywhere in New York, except maybe in an apartment somewhere.”

52.”Some of my films are known for the depiction of violence. I don’t have anything to prove with that anymore.”

53.”I think when you’re young and have that first burst of energy and make five or six pictures in a row that tell the stories of all the things in life you want to say… well, maybe those are the films that should have won me the Oscar.”

54.”Sometimes when you’re heavy into the shooting or editing of a picture, you get to the point where you don’t know if you could ever do it again.”

55.”Very often I’ve known people who wouldn’t say a word to each other, but they’d go to see movies together and experience life that way.”

56.”I loved the idea of seeing the world through a boy’s eyes.”

57.”People have to start talking to know more about other cultures and to understand each other.”

58.”If we just sit and exist, and understand that, I think it will be helpful in a world that seems like a record that’s going faster and faster, we’re spinning off the edge of the universe.”

60.”I always wanted to make a film that had this sort of Chinese-box effect, in which you keep opening it up and opening it up, and finally at the end you’re at the beginning.”

61.”The fact that food plays such an important part in my films has everything to do with my family.”

62.”The Five Points was the toughest street corner in the world. That’s how it was known. In fact, Charles Dickens visited it in the 1850s and he said it was worse than anything he’d seen in the East End of London.”

63.”There are two kinds of power you have to fight. The first is the money, and that’s just our system. The other is the people close around you, knowing when to accept their criticism, knowing when to say no.”

64.”The bottom line is, I tend to be going back to older and older music.”

65.”I mean I have a project that I have been wanting to make for quite a while now; and basically, it’s a story of my parents grew up on the Lower East Side.”