The Black Lives Matter movement has become popular all over the world. Many chapters of the movement have been started across the globe to protest the systemic ill-treatment of people of color.

These three individuals started the movement in response to the clearing of George Zimmerman  who was on trial for shooting a 17 year old African American young man, Trayvon Martin. Since then, there have been many more incidents of violence or harassment of black people and unfair trials where abusers or killers of black people go scot-free.

Therefore, in response, the Black Lives Matter movement is growing stronger. The organization’s primary purpose is to fight for black people’s rights, who they feel are targeted by law enforcement officers and harassment by others.

The Black Lives Matter movement has prompted people worldwide to fight against racism and pushed many to be more aware of the mistreatment of people of color, in all areas of life, including at the workplace.

Dealing with racism in the workplace:

Racism, which is discrimination or prejudice against persons of a different race, is rampant in the US and other parts of the world. Not only is it a problem for the ordinary person on the street, but it is also a major issue at work.

However, with the Black Lives Matter movement getting stronger every day and being supported by people of all races, companies are starting to rethink their policies, and how they may affect their employees of color.

Managers and other leaders in the workplace now have to be more aware of how they treat people of color and how they address any issues that come up.

It starts with an acknowledgment of any bad incidents which, if ignored, only sends out a message to the public, clients, and other workers that the company doesn’t care about treating their workers right.

No company can afford to have a reputation of ignoring complaints, or perhaps instituting policies that adversely affects people of color, therefore, by default, becoming  a supporter of racism.

How can companies support people of color?

Here are some ways that companies can prevent and address racism in the workplace.

There is a welcome change in corporate culture as companies become more conscious of employee welfare, and in particular, the need to treat people of color fairly.

Any mistreatment of staff can affect the company’s popularity among its workforce and customer base.  It also exposes them to legal liability that can cost them a lot of money.

Therefore, company heads have to start addressing any issues of inequality in the workplace by expressing solidarity with their workforce. Inaction can no longer be tolerated by workers that are slowly becoming aware of their rights and the unfairness of acts of racism and harassment.

Companies have a duty to listen to any complaints, investigate them, and intervene in cases that have merit, through disciplinary measures and adopting policies that prevent such occurrences in the future.

The main reason incidents of racism remain unaddressed at work is the culture of management inaction.

It’s common for managers to ignore acts of racism in the workplace because they fear upsetting the balance or think they are a non-issue.

Others choose to victimize the victims rather than fight for them. That builds a situation where gateway conduct (small acts of incivility towards others) is prevalent.

Victims of racism end up losing their voices and putting up with unfair acts, which should not be the case. After some time, these problems build-up to the point that the company loses valuable staff, gets a bad reputation, and is exposed to lawsuits.

The responsibility of opening dialogue means creating environments that encourage employees to speak out against any incidents of harassment.

One reason harassment is a problem in the workplace is staff who are unaware of the rules. Most people don’t know that some things they do can be considered harassment or racial discrimination. 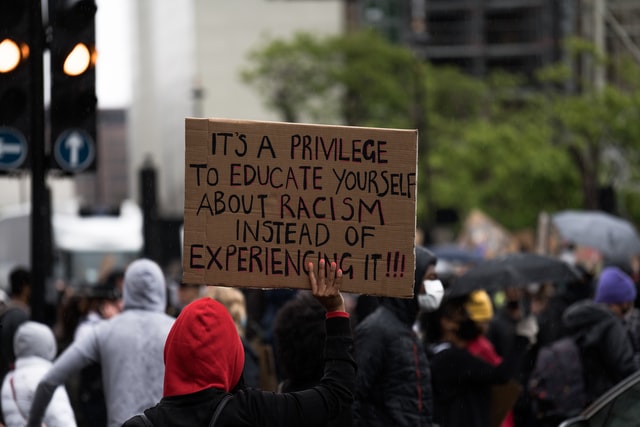 For example, an employee may exclude a person of color from a training opportunity, not thinking such an action can be interpreted as discrimination.

These incidents of workplace injustice can be avoided by educating the staff on what harassment and racism entails and how it affects the victims. That education should start from the top tier of managers to the bottom level of employees. It is not something to be left to colored employees only.

By educating staff about what harassment is and how to avoid it, as well as informing them of any consequences, incidents of racism will decrease or stop in the workplace, and by extension, to the wider society.

Companies can educate their employees about racism and how to avoid it by showing them informative films, giving them books and articles to read, and hosting talks from experts.

Another way to show support for the Black Lives Matter movement is to support people of color in the workplace. If people of color are not supported by their bosses, it’s easier for other employees to harass or mistreat them.

Company heads should show all the workers in the company that they are against any incidents of racism by being quick to deal with people who harass others. They should also put in place rules and regulations that create an inclusive workplace. For example, things like promotions should be equally accessible to all employees, through merit.

Boardroom accountability is also essential. Management must allow people of color to be considered for leadership positions. The objective should be to create a diverse leadership that is all-inclusive.

People of color must be given the same assistance afforded to other people in the workplace to achieve success. Things like mentorship and sponsorship projects should be accessible to all.

Pay audits should also be done with equality in mind ensuring salary increases are given fairly regardless of race.

Apart from laws such as the New Jersey Law Against Discrimination that support employees against harassment, many social organizations have initiatives to people in the society facing injustices.

Companies have a responsibility to give their employees access to such programs and inform them about such laws.

Justice action groups bring about a positive change for disadvantaged people in the workplace and other areas as well as fight for their rights. The participation of people of color in such groups will ensure they know their rights and may even positively affect the workplace to be a fairer place.

The law and discrimination in the workplace:

While employers can give employees all the support they need to feel included in the workplace, racial discrimination incidents are still likely to happen.

As you can see above, there are laws that govern harassment in the workplace. Therefore, nobody should suffer in silence. Anyone experiencing bullying at the workplace can also contact a New Jersey Employment lawyer for help to fight for their rights.