Discrimination on the basis of caste, creed, religion or sex is completely wrong and inexcusable.

In any company, it is the responsibility of the directorial board to ensure that everyone is given the respect that he or she deserves and that no one feels inferior or inadequate in any way.

If any woman or man feels wrong and complains to the government authorities, then this could surely spell trouble for your company. 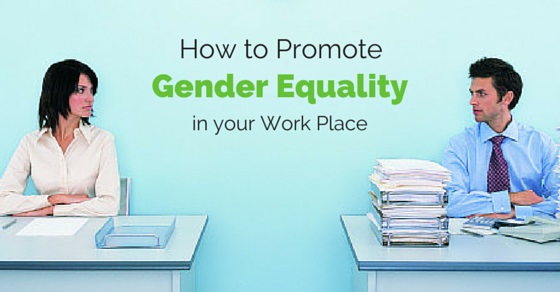 Provided here few tips which tell you about how to promote gender equality at workplace.

Ways to Promote Gender Equality in the Workplace?

The following mentioned are few tips to avoid gender inequality in the workplace and also the importance of gender equality or gender balance.

1. Equal pay irrespective of the sex of the employee:

It is no new information that in many places across the world women at work are paid much less as opposed to men, for doing the exact same amount of work.

This is a practice that the government has certainly tried to alter in the last few decades; however it continues to persist even in the best of companies.

Companies should ensure that equal pay for women should be paid as their male counterpart because women are no longer thought of as the ‘weaker gender’.

2. Abolition of all gender related stereotypes:

In this 21st century business world, companies ensure that they leave behind their gender stereotypes as in this day and age, women in the workplace are equally capable as their male counterpart and whether it is in the field of technology, business, law, academics or even philosophy their hard work is yielding exceptional results.

Nowadays it is a done thing, which even men choose to take a maternity leave of sorts to spend time with their newborn child.

3. Promotions should be granted on the basis of exams:

Rather than simply promoting individuals on the basis of charisma or oratory skills many big companies have begun to conduct proper examinations to decide on which candidate will be promoted.

This is an excellent way to ensure that there is no nepotism or favoritism which affects the decision that is being taken and often candidates, whether male or female, who work in an unobtrusive manner end up excelling in these exams and bagging top positions in the company.

4. Placements should be on the basis of credentials:

Previously it was believed that women were not fit to join the business world because they apparently lacked the skills as well as qualifications, however, now this backward thought process has been done away with and individuals are able to freely decide upon which career field they would like to become a part of.

Even when hiring an individual to the company the board should ensure that the sex of the person does not affect their decision at all because this is absolutely unethical.

5. No special privileges for men or women:

Irrespective of whether the person is a male or a female he or she should under no circumstances be granted any extra privileges.

If the individual is a part of the company then he or she should be able to do what is expected of him or her without gender being used as an excuse for not getting something done.

It is unfair to men, when companies insist on women being allowed to head home early; rather everyone should be given fixed deadlines which must be adhered to by one.

Having an pro active human rights department is important to ensure that whenever any individual feels slighted or wronged then he or she can simply take his or her grievances to this wing, without having any sort of fears or inhibitions.

It is of paramount importance that this department looks into the matter at the earliest as well as strict action by punishing the guilty party.

Speedy justice is important because after all, as it is often said, ‘justice delayed is justice denied!’

7. Conducting workshops or seminars for employees:

One of the best ways to promote men and women equality in the workplace is to conduct regular seminars and workshops for employees so that they are aware of how to conduct themselves in a professional manner.

Even the boss or the board of directors should be encouraged to attend these seminars or workshops as often it is them who act in an unjust manner and discriminate against people on the basis of their sex.

Such talks given by professionals are indeed, both interesting and informative.

8. No separate rules for males and females:

The rules and regulations of a company should be strict but at the same time they should be uniform and applicable to one and all irrespective of whether your sex is male or female.

When companies have special rules for males or females then what they are doing is creating a clear demarcation between both the sexes and that is exactly where the differences creep in.

For the work force to work as a comprehensive unit there should be uniform rules for people belonging to either sex.

9. Strict policies against gender discrimination in the workplace:

Discrimination on the basis of sex has strict legal implications, at the same time, however instead of merely worrying about the government taking action against them, companies should ensure that they have their own set of rules and have a zero tolerance policy when it comes to any of the workers harassing one another on the basis of gender issues in the workplace.

No chauvinistic comments of any kind should be encouraged especially when they are bound to hurt the sensibilities of the person at the receiving end.

10. Strict punishment for any offenders:

Rather than merely having strict no tolerance policies, in addition to that companies should also ensure that there is a strict punishment for the offenders. This is a sure shot way of promoting gender equality in the work place.

If you have severe punishments and are not afraid to implement them, then that certainly serves as a precedent, preventing others from making such mistakes themselves.

Hence there should be strict punishments for such behaviors.

11. Leadership roles given to both genders:

Previously it was often thought that only men would be able to manage leadership roles in a successful manner however now, women have proved that they are more than equipped to take up any leadership role that is granted to them and they are able to do anything that a man can.

A great way to promote gender equality in the work place is by granting leadership roles to those individuals that are truly deserving of it, irrespective of their sex.

If a person has leadership skills, he or she should be given a leaders role.

12. Everyone is defined by his or her individuality:

Companies should train their employees to look beyond the exterior of the individual and gauge the person based on their capabilities but not on the basis of their gender.

A person should never be defined by what his or her gender is, rather people should be taught to look beyond.

No two individuals are alike and therefore no one should have his or her identity be restricted to whether he or she is a male or female as it is something that is absolutely unfair.

13. Women should be encouraged to come forward and speak their mind:

Though women have proved time and time again that they can do anything which a man can, yet at the same time there are many countries and states where women continue to be treated as second class citizens.

They are believed to be fit only to sit at home and look into domestic issues. In the work place, women should be encouraged to come forward and speak their minds boldly and without any inhibitions.

Most often they are able to come up with exceptional ideas that blow everyone away.

14. Having an open minded work atmosphere:

It is only when the boss or the directorial board has an open and broad mind that there will be gender equality in the workplace.

If the boss is biased or favors any one sex in particular then this negative attitude is bound to affect the mindset and thoughts of the other employees in the company.

The credit should be given to the employees based on their performance rather than personal favorites.

So these are some ways in which gender equality in the workplace can be promoted such that no one feels wronged or slighted at any point of time.

It is only when employees are happy and feels safe in the workplace that they are able to give their one hundred percent and put their best foot forward.

If the mind of employees is bogged down with fear and feelings of inadequacy they will certainly not be able to focus on the task at hand and come up with novel ideas.