Once the job seekers get interview calls, being chosen from the pool of applicants, the probability of getting selected becomes significantly high. And most of the experienced job searchers have a fairly good notion about the prospective employer’s expectations from them. But in spite of that, sometimes, especially the freshers commit certain blunders, knocking the pet peeves of the hiring managers.

Thus, here we present some of the most common job interviewer pet peeves and probable suggestions on how to avert them. 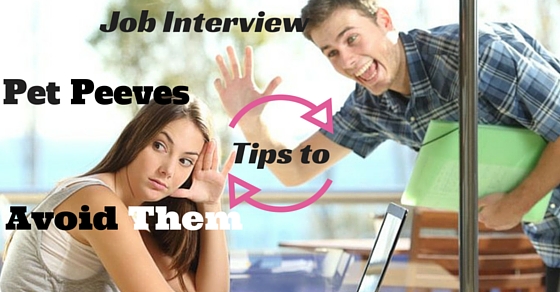 1. Being Late for the Interview:

Since, the first impression is said to be the last impression, being late for an interview can eliminate the chances of getting selected, although the candidate may be highly qualified.

Therefore, it’s always better to reach half an hour early rather than even a minute late. And if the candidate is unaccustomed to the interview venue, he or she can even go and check the place one day in advance.

It is always advisable to appear in formals and be properly groomed for interviews. If the company has an informal set-up and if the candidate is not too certain about what to wear, it’s better to ask the company’s representative, who is communicating with the candidates on behalf of the hiring managers, about the attire preferences. Most of the employers like to have properly dressed and groomed employees for their companies.

3. Resume with More Than One Page:

This is one of the most common pet peeves for any interviewer. Since they have to interview lots of applicants and have to go through heaps of resumes, thus, a resume with more than one page can cause much annoyance for them. It’s better to keep it short and concise in one page to gain positive attention from the hiring managers.

4. Excessive Fragrance Can Be Unpleasant:

The candidate has to understand that there’s a huge difference between going for an interview and going for a date. Getting drenched in too much of strong perfume and smelling too heady can be devastating for the interviewer. Not only good smells, but candidates should also refrain from smoking and consuming alcohol, in order to avoid those strong smells too.

5. Not Researching About the Company Profile:

In this tough competitive era, a lot of candidates fight for a single position. It is essential that the candidates do a decent amount of research about the company in order to impress the interviewer.

The candidates should invest a little time prior to the interview and carefully go through the website of the organization to find out the organization’s history, vision and mission statement. This will absolutely impress the hiring managers if they ask anything about the company’s profile.

Many employers grumble that too little communication from the applicant leaves them infuriated. An interview basically means a meeting for conversation, and if the conversation is less from the applicant’s side, the interviewer is unable to make out certain things about the candidate which eventually leads to rejection.

Too much talking can exasperate the interviewers beyond imagination. Sometimes, interviewers often confront candidates who keep on babbling without actually concentrating on the question being asked, and this is enough annoying for the interviewer resulting in a hasty wrap up of the interview session.

Therefore, it’s very important to concentrate and answer to the point to the interviewer’s queries, so that the meeting doesn’t become monotonous to either the candidate or the interviewer. Dragging a topic is not at all tolerable, and answers should be concise.

Normally, applicants are too frightened of interviews. And often, this nervousness leads to a lack of concentration which results in giving incorrect answers or irrelevant responses to the interviewer’s queries.

Many a time, this lack of concentration is perceived as a lack of seriousness for the applied job, causing rejection of candidature. It is absolutely necessary for the candidate to pay attention to the interviewer and answer concisely to every question being asked.

Candidates, who avoid making eye contact with the interviewer throughout the whole conversation, can highly infuriate the interviewer. Some people are introvert, and they find it comfortable to look into other directions and talk rather than looking into the interviewer’s eyes.

Some unintentionally start playing with their pens, and some toy with their rings or handkerchiefs; but this all is extremely improper body language which reflects lack of confidence and is even considered to be indecent by many interviewers. The trick is to look in between the interviewer’s eyebrows, thus saving the applicant from the discomfort of making eye contact.

10. Poor Communication and Use of Street Slangs:

Poor communication can be a turn off for many interviewers. Specifically, the language used to converse means a lot in interviews.

Some candidates are so used to street slangs that they start speaking them in interviews too, which is strictly a no-no in the professional world. Candidates who frequently use ‘uh’ and ‘um’ can infuriate the interviewer easily. Thus, the candidates should always check their dialect while speaking.

Most of the recruiters complain of a gigantic offense, lying. Many candidates consider this as an easy technique to crack a job interview. They think small lies can use to take the shortcut to success.

This comprises giving deceptive information, exaggerating achievements, even overstating prior job responsibilities and experiences. But the truth is, most of the recruiters can make these out with their experiences and background checks of applicants. So, it’s always better to be truthful in interviews.

Some job aspirants are so desperate, that they apply to nearly every single vacancy existing on the careers segment of an organization’s website. This can misinterpret by the employer as the applicant is anxious to employ, may it be in any position.

Maybe the candidate considers it to be his or her flexibility, but to an employer, it is desperation, and this might give the impression that the candidate is “Jack-of-all trades-master of none”. It is always better to focus on any one vacancy that is most suitable for the candidate’s profile.

13. Speaking Critically of the Former Boss or Organization:

An applicant should never complain about their former supervisor or organization. Speaking negatively about the previous job will definitely be a blunder as most of the recruiters hate this. Rather, a candidate should give some other cause (better a positive one related to the personal goals) as a reason for leaving the earlier job.

It’s always praiseworthy to reflect confidence in your attitude and be competent enough to sell your skills, expertise, and talents to prospective recruiters. But the candidate has to be very careful about the margin in between confidence and overconfidence.

Selling skills in a modest way is more than acceptable whereas a small hint of egotism or superciliousness may be harmful to the candidate’s image. Thus, while recounting prior achievements, the candidate should preferably always mention that it was a team that achieved rather than focusing more on his or her individual performances.

But why to take a risk, especially when it is the question of getting a job! Better all candidates should note down the interviewer’s contact details and send a courteous, thank you for a message to the interviewer once they complete the process.

The candidates should discuss salary and other benefits with the recruiter, once they select and offered a job. But when they have a tendency to drag this discussion, it leaves a bad impression, and even sometimes the interviewers might think they have committed a blunder by offering the job to this type of candidate.

17. Giving Up On a Job Offer after Accepting It:

Suddenly when the candidate backs out, it means the company has to instigate the whole selection process all over again, which is a sheer wastage of time. So, the candidate should be absolutely sure before accepting any job offer.

18. Candidate Misbehaves With the Receptionist or Assistant, or Other Lower Division Clerks:

Many potential recruiters consider their assistant or secretary’s opinion as well as the receptionist’s opinion to be significant along with other criteria while assessing a prospective candidate.

This is basically to see how the candidate behaves with the assistant or receptionist while filling up a form or when offered a coffee or refreshment. Some applicants unknowingly harm their impressions by behaving poorly with the staff, even if they well qualify for the position applied.

19. Applicant Points out Faults in the Prospective Employer’s Organization:

Sometimes the applicants think that pointing out negativity about the prospective employer’s organization, might impress the interviewer and the interviewer might praise the candidates for their analytical abilities.

But in truth, this is the complete opposite. The recruiters might even feel insulted if the candidate tries to point out mistakes and faults without even knowing the job policy of the company.

20. A feeble handshake from the Candidate:

A feeble handshake from the candidate might make the recruiter think that the candidate lacks confidence. It is a weak body language that exhibits nervousness and is a strict no-no. The candidate should shake hands firmly and with a smile showing his or her self-confidence.

21. Candidate Is Impassive and Lacks Vitality:

Candidates behaving in an aloof manner and showing a lack of enthusiasm may leave the impression that they are not interested in the job. Their lack of keenness easily reflects in their face and body language which an experienced hiring manager can easily read.

This negative impression will ultimately result in the elimination of candidature. If the candidate is really looking for the job then only he or she should appear for the interview and that too with vitality and confidence.

There are lots of books available in the market for preparing for an interview with frequently asks questions and their suitable answers. But whenever a candidate prepares answers from these books without applying his or her own efforts, the answers sound like stereotyped and monotonous, and the employers can easily make them out to be typical bookish responses. But even these scripted answers are not enough whenever the recruiters start asking behavioral questions.

To reply to behavioral questions, candidates have to be innovative and should use their previous experiences and achievements in their answers to sound unique.

Even with lots of preparation, it still acknowledges that appearing an interview can be worrisome for many candidates. Moreover knowing that the potential employers to have pet peeves, can make a candidate more nervous.

The only suggestion to those panicky applicants is to avert those pet peeves when they’re being assessed by the recruiters. So, for the candidates desirous to move forward, these candid perceptions on job employers’ prevailing pet peeves and tips to avoid them will definitely help during interviews.

The fundamental essence is the candidates should not give the prospective recruiters a reason to cancel their candidature.