In today’s scenario when distractions are just a click away in the form of social networks, emails or messages, it is indeed a wonder how one gets any work done properly. In the meantime, it very easy for one to lose focus even as the attention span becomes even shorter. Now, lack of concentration could also result in the person not doing one’s job well. Hence it needs to be changed. This article discusses some points on how to overcome lack of concentration at work. 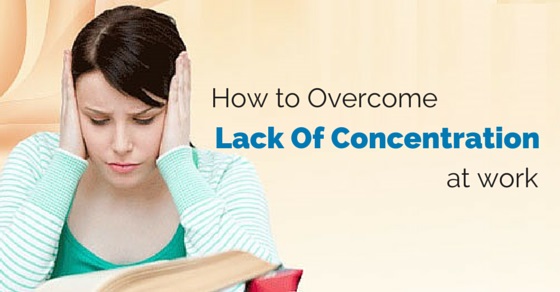 Why Overcome Lack of Concentration?

Meanwhile, one has realized that there are many reason why there is a need to overcome lack of concentration at work. If a person loses focus on work, it could result in one making stupid errors such as emailing some important work, while forgetting to attach the relevant documents or even forgetting to make that important call, when required.

Another example is also of when one forgot what to write, while in the midst of an important message. Work would suffer when the person loses focus or is not able to concentrate well on the job. It is common enough knowledge that someone who can concentrate well or focus on the job properly can go on to do one’s job really well.

Tips to Overcome Lack of Concentration:

In the meantime, one might have seen instances where one was deeply engrossed in whatever they were doing, like in reading, playing musical instruments or playing a game and so on. It is possible to get that equal attention for work, as well. Have a look at ways to overcome lack of concentration.

When someone cannot be bothered to complete an action, there is every chance that one can get bored and lose concentration. If the task is uninteresting or boring, it is natural for the people to ask for the reason, on why a job is being done? Or rather on the purpose behind it?

For example, one could be studying a subject, that is not of interest to the person with the purpose to score in the exams and thus land a dream job. Or could be that one is involved in some boring and tedious job with the purpose to contribute to the growth or development of one’s company.

Whatever be the cause for doing the job, one thing to understand is that when one has a reason to complete the work, the person could easily get motivated and thus will be able to focus well and complete the job on time.

There might be many instances when one jumped right into some job, only to be thoroughly confused and weighed down under expectations. What one needs to know, is that some jobs need to be done in an order. One cannot hope to begin from the middle of some job and continue without any hurdle.

For this reason, it is required that a person should organize the tasks. Go on and make sure that the tasks to be done are arranged in order. One would need to see which would come first. Make sure to also see if any data is missing. If one follows through with the plan, as is organized one can move forward without any issue. It is seen that pausing in between to see what comes next, also makes one lose focus.

One might think that taking breaks could help one to focus more on their job, easily. It is also evident that working for short term works better when one breaks in between. No one can ever go on to concentrate for a long time, at a stretch.

Once, you have been at work for about half an hour or more in one go, there is need to take a break and recharge one’s energies. At the same time, people stay on a job and concentrate well, once they have the break to anticipate within a specified time.

For example, One can opt to do the job for thirty minutes or so, with a break coming in between before one resumes the work again. At the same time, if one tried to work at one go for two or three hours, one could be losing concentration every ten minutes or so.

Every office for sure has a door. However, how many people do actually opt to keep it closed? While busy on the job, it is better to close the door, so as to tell everyone that the person is busy and would not like to be disturbed.

If working from home, then definitely opt for this option so that one’s concentration is not in any way disturbed by one’s family, for example by spouse or children. It would also be better if one could inform that there should not be any interruption as one could be busy. One can also go on to opt for headphones to block off any further distractions.

One should never go hungry while on the job because the person could get easily troubled. It is seen that when the blood sugar goes down, the person could lose focus and will have a short attention span. One could as well be in a terrible frame of mind.

At the same time, if a person is to eat well and fill one’s stomach, then one would feel drowsy and sluggish. Hence, one should take care to eat moderately. For example, for lunch, instead of having a heavy lunch have a sandwich or something light like a cereal bar or fruit to eat.

Well, with the social media networks, emails and other stuff on the internet waiting for a person to come in, it gets easy for one to lose concentration. It is found that whenever one gets online to check on social media sites such as Facebook, Twitter or so on it takes them time to get off it and get back to work.

When this happens, one also tends to lose focus on the work. Thus, unless the internet is needed for the person to do the job, it is better that one opts to have it off.

Whenever any one Is in a hurry running around getting things done, it is inevitable that one would lose concentration. In such situations, the person would also end up making more mistakes. At the same time, when one tries to repair it, more time is spent on it.

If ever one has made some error, which has effected a person’s work, like sending out a wrong mail or forgetting important things, then the whole experience could be a failure. However, if one was to take things one by one at leisure, the person will be able to focus more and thus, be more competent and get more things done on time.

8. Do hard task when alert:

One would also need to know, how to arrange one’s work on the basis of the energy levels. That is if one opts to do the toughest job, at a time when one is most vigilant then it should help to take full advantage of one’s concentration.

It is seen that emails can go on to disturb the concentration of the person at work. Most of the people are tempted to answer the incoming mails in between jobs. However, if we can schedule the mails coming into a few times in a day, one can also opt to deal with all mails at one go.

Sleep is very important for everyone. Lack of proper sleep could leave one very irritable, sluggish and sleepy thus leading to lack of concentration, while at work. Identify the reason for lack of sleep, reasons could be much fold including depression, stress at work or home, odd work hours or other health disorders.

Once the problem is identified, go on to find the solution. Try and get maximum sleep, so that one can get back the lost concentration. To get sleep, one would need to avoid caffeine, have a warm shower, listen to music or even read a book.

General tips to cope with lack of concentration:

There could be many reasons for lack of concentration. It could also be the symptom of other conditions such as depression, menopause, anxiety, pregnancy, deficit disorder, chronic fatigue and so on. If the symptom persists, one may need to consult the physician about this. Some other common tips on how to overcome lack of concentration are to resort to meditation, eat balanced meals filled with nutrition, exercise regularly, get plenty of sleep, shut off all distractions at work and much more. One can also listen to music if it would help someone to concentrate.