Nowadays, it is not only tough for a candidate to bag the dream job but also for the employers to do justice in the interview selection of the most deserving candidates. This calls for a more sophisticated way of choosing among the applicants.

Methods like the ATS and other labor easing software are being employed to do all the dirty work on behalf of the employers. But nonetheless at a certain point of time the employers have to get down to brass tacks and turn the diamonds from stones.

However calling a candidate to an interview takes the same amount of effort as making the final selection. Here are all the guidelines you can use to frame the perfect invitation: 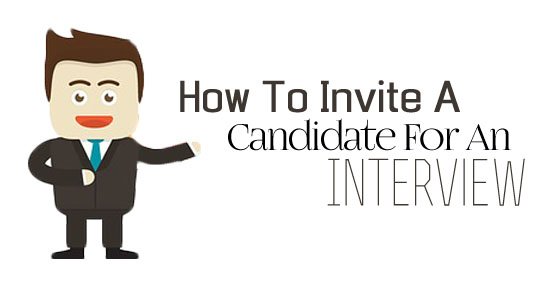 How to Invite Candidate for a Second Interview:

The following mentioned are few second interview tips that help you crack a interview and how to invite someone to an interview .

The employer may mention the few traits of the employee that have shown promise. This will do wonders in lifting his/her spirits and is paramount to performing well at the second interview.

2. Mention the name of the interviewer:

Do not leave out any detail in a letter pertaining to the second interview process. Do highlight the date and the place where the interview is to be conducted.

Be careful while filling in on the dates because more often insincere mistakes have been seen to be made. An easier way to make this more effective is to repeat it a couple of times in the invitation. Repeating the date and time will also help the candidate in remembering.

It is all the more helpful if the companies use more applicant friendly methods. One of this can be to send automated text messages to remind the candidates of the interview on the previous day.

4. Sound positive without giving away any false idea:

It is just as important to sound neutral as being positive about the second call to interview. Candidates often take it for a fact that they have secured the job when they are called to a second interview.

Far from that, the candidates should know that the call to a second interview does not mean that they have been selected.

It merely means that their performance at the last interview has impressed the interviewers enough to qualify them for the second.

The candidates therefore should take just as much preparation for the second interview as they would for the first.

Nonetheless, the employers should also refrain from writing anything in the letter that paints a misleading picture.

5. The need for response:

The employer should stress on the need for response from the candidate once they have read the invitation. This confirmation is essential for preparing an orderly chart of all the candidates who are to be interviewed.

In case of any mishap if a candidate is not being able to attend the interview, he/she should let the company know. Besides that candidates ought to confirm their attendance as per the norms of the interview even if they are not coming.

Otherwise the company will have to set up another interview to fill the vacancies left by all those who did not show up at the cost of the company’s own time.

Interview Invitation to a Candidate for a Phone Interview:

1. Why a convenient option:

In light of globalization the prospect of a telephonic interview shines much brighter in comparison to vis-à-vis interview. This type of interview in addition to reducing the different problems seen in personal interviews saves time like no other.

Moreover, some candidates are better off being interviewed on the phone than in person. This is normal since many a time candidates experience a nervous breakdown if the environment of the interview is nerve-racking.

Telephone interviews have marked a decrease in the number of such failures where candidates cover down for stage fright.

2. What it usually leads to:

Interviewers are often keen to make do with telephone interviews to save time. This a time effective and cost free method for the candidates.

The candidate are let known the time and date of the interview beforehand so that they can be ready with everything they need. The candidates might be asked to send all the required documents and attachments by e-mail since they are not interacting in person.

Doing well on a phone interview does not necessarily mean the candidate is selected. Most HR companies have to test the candidate on interpersonal communicative skills on top of verbal abilities.

Do mention the duration of the call so that the candidate prepares as much as needed. Suppose if the interview is of 45 minutes then the candidates ought to work on probable questions that might be asked.

In addition to that they have to acquire sound knowledge about all the bonafide topics that are considered favorites of the interviewers. Also stating the exact time of the interview time and again in the invitation is of utmost importance.

Since it is not a vis-à-vis interview it is possible that a candidate under stressful circumstances might forget about it. Therefore, reiterating the time, duration and date of the interview is a very good idea.

Sending a prior notice or a reminder is an absolute necessity. Moreover, this caring attitude of the employers to help the candidates throws the company into good light. This comes to genuine help of the applicants since young people in the rush of things tend to be forgetful.

Sending an automated reminder creates an impression on the candidates regarding the interest of the company in the employees. Not only that, a last minute reminder does wonders to give a final boost to the candidates specially to those who are dreading the call in fear of performing badly.

On the other hand, this process acts as a benevolent reinforcement that sees the candidates through the interview in a positive manner.

5. Convenient for the employer:

A telephone interview is often arranged for when the employers is not being able to be bodily present for it. Nonetheless, it takes care of all the vital things the candidates are to be judged upon. Only except for the interpersonal skills which is set aside for a face to face interview.

Often it happens that the interviewer in view of his/her prior engagements cannot offer much time to the candidate. That is why a telephone interview is a great way to make most of the the short span of time the interviewer has made him or herself available for.

The employer even asks a trusted representative to conduct the call and test the candidate on the specific set of skills crucial to the company concerned.

The candidate feels literally at home on a telephone interview. The candidate can be at ease and can worry less about how unsightly his surrounding is unless it is a video call.

Nonetheless, a telephone interview is a great way of reaping the best out of a candidate without throwing him/her off base.

Also the candidates can fret less about what is going to happen over the interview. Moreover, he/she can run the daily domestic errands and still be on time for the call.

But it is important that the candidate sounds active and enthusiastic during the interview. So do not engage yourself in work and chores to the point of being worked up.

How to Invite Candidate for Interview by E-Mail:

The following mentioned are few tips on invitation to interview candidate through e-mail.

An email inviting candidate to interview requires a few simple steps. And it is basically to prepare grounds for the big day ahead. The email has to contain all the vital information necessary for the interview.

It usually opens with an appreciative comment followed by the order of events which is to take place on the day of the interview.

The positive remark is to be written in such a way that it only lends a boost to the candidate’s confidence level and not prompt any misleading assurance of selection.

Rest assured, the invite is to fill the candidate in on the details regarding the venue and date or dates if it is to be carried out on consecutive days.

Write in no uncertain terms as to why the candidate is being called. Write the subject according to the suitability of the candidate. There is a variety of work at a company and candidates are chosen on the basis of their skills for each field of work.

Therefore, make sure you are pointing out your necessity in your subject. The candidate is to be notified on the requirement of the company and the reason they want to call him/her.

Often candidates find it suddenly imposing on part of the interviewers to be talking about a field of works that is not the candidate’s best area of interest. So the motive of the interview has to be made clear, so that misunderstandings do not arise.

Although, the kind of information it mostly stresses on deals with the details of the interviewer/s. Almost every valid information the candidate needs to know is given.

Sometimes even the designations and their field of expertise is notified just to up the candidates. They can use this little piece of information to great advantage.

Pinpointing the interviewer/s area of expertise not only piques their interest but also passes one off as an amiable candidate with lots of potential.

At the end of the letter specify all that the candidate needs to carry to the interview i.e. CV, certificates etc. They are even sent a reminder by way of SMS or email lest they should forget any.

Often it happens that after a brilliant cameo at the interview the candidate finds him/herself in a false position having forgotten to bring one of the vital documents.

Although, they are excused for their careless attitude at that moment, it does take a toll on the performance of the candidate as the interviewers are disillusioned by this small stunt of carelessness.

Supply the candidate with all the details despite it being available on the website. At times due to net traffic, portals get jammed and the candidates find themselves in a pickle at this juncture.

Despite everything that is given on the net, leave no stone unturned to help the candidate with information as much as you can because tomorrow they are the ones you will be depending on to run your company.

Interviews are scary for the candidates therefore you should try your best to put the candidates at ease so as to bring out the best in them. This having been said, ensure that no matter which form you choose, maintain a professional tone and a formal distance.