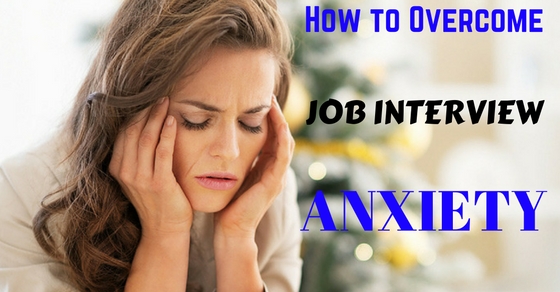 1. Try to visit interviewing venue one day before the interview:

2. Always be early for the interview:

Some people have a habit of arriving at some places on time or later. But if a person has anxiety issues, then it is always better to arrive at the interview a bit earlier than expected time. And by this type of behavior that candidate might understand that arriving early on the interviewing venue helps the person be calm on the time of the interview. It also helped him to observe the rest of the necessary things which is relevant to ace his first impression on the interviewer.

3. Research more about the company and offering positions in advance:

It is always advisable to all the candidates that after applying for the position in a company, that candidate should be aware of the interview process and try to gather as much as information about the company and the position offering from that company. Therefore, researching well in advance about the company and their offering position helps to acquire more knowledge about the interview, this eventually presents a positive side of the candidate’s interest towards the company.

4. Be prepared with all sorts of information about the interviewing panel:

Most of the time people try to show their interest towards the company and the position offered. But they often forget about the people who are supposed to be focused on and they are the interviewing people. Therefore, every candidate must be aware of the interviewing panel so that they can impress them more than their answers. Once the interviewer gets impressed by the candidate, then nothing can stop him from getting that position in the company.

5. Wear something comfortable, professional and clean:

It is very much necessary that while preparing oneself for the interview a common stuff that needs to be kept in mind is their professional presentation. And that is how they present themselves and they need to be clean while presenting themselves professionally. Therefore, every candidate needs to wear something clean and comfortable which should present their personality suitable for the position that the company is offering.

6. Try to get sleep properly before the interview day:

Some people might experience some sort of anxiety with these job interviews. Therefore, to avoid such level of anxiety a person need to calm themselves first, then try to explain themselves that it is not a big deal that if they get the job in that company or not. The important thing which matters to a person is that at least they tried to attend an interview, even if they knew that they will fail in their attempt but because of their confidence in themselves they attempted this, so it needs to be appreciated instead of feeling anxiety.

7. Take a walk or exercise in the morning:

8. Have healthy breakfast on the day of the interview to keep yourself active:

It is necessary to have a complete healthy and rich breakfast every day, but some people have a habit of skipping their first meal of the day when in rush or something comes up in urgent. Therefore, if a person have an interview one morning and because of anxiety if he does not feel hungry that day, then he should keep in mind that if he skips his breakfast, then there is a possibility that the person can feel hungry or lose control during the interview.

9. Keep yourself prepared with questions which you need to ask the interviewer:

10. Practice talking more about the strengths:

There is a possibility that because of nerves and anxiety a candidate might blow up his chances of getting that job. Therefore, to avoid such situations a person need to practice their interview sessions at home, which can help them be better during the interview. And to make that happen a person need to conduct a mock interview at home where he need to be fully prepared with all possible questions from the interviewer and then this can lead the candidate feel confident enough to answer any question during the interview session.

11. Be comfortable while talking about one’s weakness in job interview:

Some people might not feel so comfortable while talking about their weakness in front of others, but during the interview if an interviewer presents such questions which involves one’s weakness, then it is the candidate’s responsibility and maturity to handle that situation cleverly without losing his chances of getting that job. Therefore, every candidate needs to practice talking more about their weakness with the help of those fake interview sessions at home.

Sometimes it is hard for people to overcome their anxiety issues as compared to the rest of the people. But it is always better to try something instead of quitting. Therefore, every candidate needs to stay confident and positive during his interview session even if the questions presented by the interviewer make one feel negative. For example, while talking about the previous job experience a person need to keep in mind that his negative reaction over the question can make things tough during the interview.

13. Be active and try to be attentive during the interview:

14. Take deep breaths before and during the interview:

15. Keep in mind like that it is some sort of conversation session instead of the interview session:

16. Take a moment before answering any question:

Some people fear answering late during the interview might cost them a big time, but taking some time before answering any question can help the candidate be more sure of their answers during the interview. Therefore, it is always advisable to all the candidates that instead of making few job interview mistakes while answering the question in a hurry or messing up things, it is better to take one’s own time to answer the question so that there won’t be any chances of ruining things for their own self.

It is always better to keep your reference details handy because that can help the candidate and interviewer waste less time over such official formalities. Therefore, it is better to keep all the necessary documents ready in advance instead of taking much time for further processing. And once all the necessary formalities are taken care of then there won’t be any issue with such official obligations when it comes to the candidate and the company.

19. Always manage to inform the cause of delay:

20. Avoid scheduling anything after the interview:

In short the bottom line is that feeling anxious during or before the interview is a common thing, but letting that anxious feeling all over a person and sabotaging the interview can make things worse for the future. Therefore, in this discussion about how to overcome job interview anxiety, there is a list of stuff which can help all the candidates with their anxiety issues to overcome their anxiety by following these things in mind while planning or attending an interview.