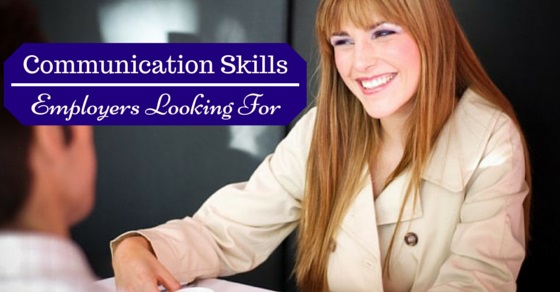 Communication is one of the most important aspects of every individual’s life.

The way a person communicates helps in understanding how well is he well tuned with himself and the society.

Communication helps in opening up various doors for a person’s development. It also plays an instrumental role in development and improvement of relations which are formal as well as informal.

In the corporate world, the employers are constantly on the lookout for people who are able to communicate well.

It is widely known that communication can bridge gaps and improve any negative situation if it is handled well.

Hence it is always a plus point to the candidates looking for jobs to make sure that they possess some of the most important communication skills.

What Employers Want is these 9 Communication Skills:

The following are the types of communication skills that the employers are looking for.

The way a person talks, his pronunciations, command over the language in which he converses all come under the vocal skills.

The first verbal skills of individuals or a candidate is tested at the time of the interview. Verbal skills are an important part of communication as most frequently this is the form of communication that will be used in the office to exchange information, ideas and knowledge.

Verbal skills help in interpretation as well as communicating without blunders. A person with good command over the language will be able to talk fluently and with appropriate use of words and pronunciations.

If one is well versed at vocal communication, he shall be able to convey messages clearly without creating much scope for misunderstanding of the messages. Hence, the employers appreciate candidates with good verbal skills.

Non verbal skills refer to the various ways in which a person sends the message without the use of the verbal skills.

If an interviewee fails to maintain eye contact or a straight body posture during an interview, the interviewer may find him to be under confident or perhaps, disinterested.

The ways in which non verbal communication helps in improving relations within the industry is not lost by the companies. Hence, employers are always on the lookout for candidates who are good at the non verbal skills.

It is an old saying that, if you talk, you repeat what you know. If you listen, you gain knowledge.

Listening is one of the most important and good job skills that employers are looking for in their potential employees.

People who can patiently listen and not only interpret the meaning and put the message given by the subordinates to action are considered as the smartest people around. Listening has a lot of advantages in its own.

If one represents a company in a major deal and if he has good listening skills needed for a job , he can understand and adapt to what the other representative of another companies are trying to say.

This makes him understand the various cues which that person gives in and respond accordingly.

Listening skills are very important in order to have good verbal and non verbal communication skills. This is one of the important and good skills for a job.

Written communication is equally important as the oral or verbal communication. In the written form of communication, the person has to express his message or ideas in a very formal, to the point and by eliminating all the jargon.

However, the major setback in written form of communication is that the receiver of the message cannot predict the tone of the sender’s message.

Hence, in this case, the words used by the sender in a written form of communication have to be to the point and match the frequency of the receiver.

The employers are attracted towards candidates who are well versed in written communication as it is a difficult form of communication.

The way in which a person is able to talk to people with only the sound medium is one skill that the employers are looking for in their potential candidates.

The transactions of information and even deals in the companies may be done over the phone which is a sound medium of communication.

The person who is able to convey his message well on the phone and interest the receiver in his message is one quality or skill which will automatically get bonus points for the candidate.

Telephonic skills may be an under-rated skill, but it is definitely one of the most sought after employment skills needed for jobs, by the employers.

Presentation skills refer to the ways in which a person presents himself and his company or firm indirectly in front of other important persons or organizations.

When a person is hired for a job in a firm, he is indirectly considered to be a representative of the firm in the formal as well as informal world.

Hence, presentation skills for work are of utmost importance as they help in building the image of the firm in the already competitive world.

People with good presentation work skills and qualities help in creating a positive image about the company and its founder in the minds of the entrepreneurs, consumers, suppliers and everyone else in the hierarchy who is directly or indirectly connected to the firm

Another important skill to have or required that accommodates itself in the communication skill is the persuasive skill.

It basically refers to how a person is able to make the receiver believe him and accept his message and decode it in a way that the sender wants.

Persuasive skills are of great important to almost every company as only through persuasion can they sell their product or services or put their plans forward. Persuasive skill is one of the most difficult among the others as the person has to not only make sure that the actual meaning of the message is correctly decoded but also make the receiver believe whatever that the sender wants to say and ultimately stays in his favor.

People with great persuasive skills are immediately considered as gems by the employers as they are considered to be priceless to the firm or company.

It is easy to be awarded and acclaimed when doing well. However, a person who not only accepts criticism gracefully and also accepting their mistakes is what makes an employee an honest and good one.

People who are good at the above mentioned communication skills may end up at a standstill if they cannot accept their mistakes and take criticism positively.

Employees who lash back at any point of being shown the right way, no matter how persuasive good listeners they may be would prove to be a major threat to the reputation of the company.

Hence along with having the other mentioned skills for jobs, employers also make sure that the candidates who are selected have the ability to accept and work upon their wrong doings. This is one of the good skills to have for a job.

People who have a good word to say or a sense of acceptance towards their colleagues are more likable in any scenario.

Employees who exchange words of support and motivation help in not only keeping the workplace environment friendly but also helps in developing good relations among the employees.

Support and motivation are two of the major aspects of communication which helps in keeping the work as well as the daily life of the employees to move smoothly.

Employers are hence in the lookout for people who are not only good at the above mentioned job related skills but also at the humane skills.

Communication skills help a great deal in forming a very strong reputation of a person or a firm.

If used at the right time for the right thing it can prove to be fruitful to everyone working in the hierarchy. A good communicator not only knows what to speak and how to speak but also when to speak.

Why Research is Important for Students, Humans, Education