Handshakes in original strike a balance between a forceful grip and finalisation of the projects when it comes to the business works. Handshakes are the non-verbal form of communication which determines the engagement of one person with another communicating the strong impact.

Strong and firm handshakes tells about a person’s personality, business styles and the various negotiating techniques. The firm handshakes are of great importance to large established business and the employees as well. 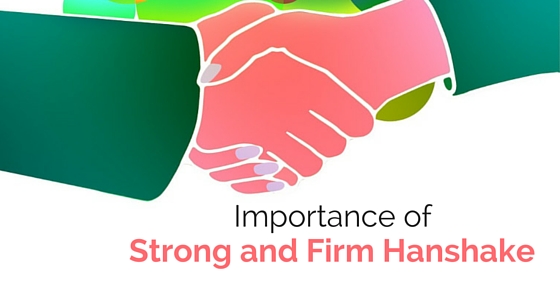 The first impression is the last one in the businesses and one never gets a second chance when it comes in terms of negotiating the business proposals and the deals.

Strong handshakes set a tone as well as the perception of one’s abilities. Loose handshakes show uncertainty and lack of interest in the proposal by the person.

The more firm a handshake is, more the confidence is reflected to the opposite individual. When a person shakes hand firmly, it shows that a person is confident in what he or she has come forward to accomplish.

If a person is not confident, he or she will not present a firm handshake and will try to do away with it, kind of running away from the proposal being finalized. So, firm handshakes highly reflect the confidence level in an individual.

May be the person fails to convince otherwise by verbal communication but the non verbal gestures at times reflect the trust factor within. It shows how confident are you and if you will be confident only then you will be able to reflect trust in others for you.

Your confidence helps in instilling trust in your words and the work abilities you possess. So firm and strong handshakes are of vital importance.

4. It shows the connection:

When you meet someone may be ususally, you make sure to make a handshake. This is by human nature or we can say by default only, that a person heads towards the handshake along with a constant eye contact which shows the connection between the individuals.

If a person does not make an eye contact, it gives an impression that the person has forcefully arrived for the purpose or the person is not at all interested in the matter. So, it is better to have a good and tight handshake.

Personality of the person is shown and reflected through various un noticed non verbal signs like the head shakes, handshakes, nodding of head, eye moments and so on but particularly the handshakes are accompanied by the other non verbal gestures and they are noticed on the basis of shaking hands only.

So, even if you nod the head for any of the important proposal and do not shake the hand firmly, you may be considered uninterested in the contract or any of the business purpose. People judge your personality on the basis of how long you shake your hand with the other person.

How much attentive you are, is shown through the verbal and the non verbal gestures you possess. The attention you pay during the conversation is put forward by the way you react and that reaction is seen through the gestures you give.

If you give a good and firm handshake after the meeting is over, it will present your attentiveness and also the presence of mind you had during the conference or the meeting.

7. You are responsible for yourself:

You are responsible for you ownself. Your body language says all about your personality and the thoughts, your beliefs and also the level of confidence you possess. So ultimately, you yourself are responsible for presenting your image infront of others.

The eye contact and the stern, stiff body language is now days one of the promotional strategy used by the employees in the organization. What if you do not shake the hand and directly start the conversation?

It will ultimately show lack of awareness and little bit of rude attitude towards the receiver. So, it will lead to negative publicity instead of good promotion.

You possess enough knowledge and also you are informed well about the issues, presented by you especially during the interviews.

When in interviews the participants give a firm handshake, it shows the confidence level and also the point that you posses knowledge or the related information which drove you for the interview. So, it helps a lot during the job interviews also.

Handshakes tell an individual how extrovert and social he or she is towards the society. If a person himself or herself comes forward for shaking hand, it shows that the person is not at all shy and is quite extrovert. This is also one of the good quality that a person must possess, inorder to get success in life.

The persons who are introvert, often cease to move forward for socializing and always remain at the back so that they are not caught for doing any task or something like this. The people who are shy often fail to give a firm handshake and it ultimately is reflected in the results from an interview.

11. A big advantage for women over men:

The woman have greater advantage of shaking hands over the men. This is because, the psychologists say that the grip of women are considered more memorable and pleasant than those of men. So, giving a firm handshake is must not only for men but also for women too.

When a person comes forward with a hand shake, eye contact and the good body language with another person, it shows that a person is actually taking an initiative of his own and it forms the best part for being selected in either the job interview or any other important thing.

A firm handshake shows that a person also knows the good and demanded body language. If a person is lazy enough, he or she will avoid shaking a hand, you never know the extent of laziness of an individual.

So, it gives an idea of whether a person will be a good presenter or no. This way it is very important to give a firm and the strong handshake.

Many researchers have come to the point that a good, long handshake is better than no handshake. No handshake shows lack of firmness and also presents a negative image of an individual which is not in the interest of either the receiver or the interviewer. So it is always advicable to be positive while hand shaking.

The handshakes also shows the attitude of an individual. Whether an individual inherit a positive attitude or the negative one, is shown through the body language and also the words one speak.

So, it is always advicable to keep a firm handshake as it will showcase a positive and good attitude to the other person standing or sitting in front of you.

An individual’s inherit nature is depicted through the good handshake and the eye contact that one makes. If a person is giving a firm and a little long and warm handshake with all fingers folded, it means a person has interest in what you may present to him or her after a meet or you may say as an introduction.

So, such kind of little things shows and speaks a lot about an individual nature, likes, dislikes, knowledge and the information, also the interest within is reflected.

Consensus is the way of reaching a mutual agreement among the individuals or even between the two companies regarding any business deal or any of the project. Whether a person will reach consensus with the other party is highly reflected through the firm and the strong handshake.

Thus we can say that, handshake acts as a first step in knowing and judging an individual. So, if you wish to get judged in a positive manner, it is better to put forward your hand with a motive of firm shake.

So, above are the value or importance of giving a good and firm handshake. It will reflect the overall personality of an individual and however is good enough for oneself also.

During the job interviews, the first thing which is taken into consideration is the handshake an individual can make or the body language a person posseses. It forms an important part in one’s life, not just for the purpose of interviews or the big business deals but also in day to day life of an individual.