There is an age old debate on whether it is more beneficial to work in a team or whether working alone is actually a better option. For such a question there is no definite answer that can be given, rather based on the type of person you are and what your personal preferences are, you might prefer working solo or in a group more.

So if you plan on working solo, given here is a list of advantages as well as disadvantages so as to ensure that at the very onset you know exactly what you are getting yourself into. 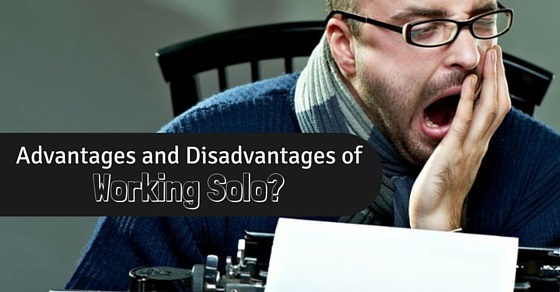 Pros and Cons of Working Alone:

1. You can give expression to your thoughts freely:

One of the biggest advantages of working solo is that you can give vent to your emotions freely and you need not worry about having to deal with opposition at any point in time.

Since you are working with nobody but yourself you need not have to constantly waste time trying to explain your ideas to someone else or even try to convince them to get on board with you about a risk which you think will surely pay off.

Most people’s creative juices flow the most when they are in quiet contemplation with themselves away from any kind of disturbance and noise.

2. You do not have to depend on anyone for help:

For many people their work is their worship and with each project entrusted to them they try and out do themselves and really impress the bosses or seniors at the company.

Yet at the other end of the spectrum there are people who by nature are little lazy and the moment they have to work in a group, they start taking things lightly, believing that yes, someone else in the group will do my job even if I do not do it.

Working in a group means that not everyone has that push to do well and at the end only a few people end up doing all the work which has to be done.

3. You are able to do things in your own time:

It is needless to say that everyone has their own style of working. There are some people who prefer to start working on a project the moment which it is assigned to them, whereas on the other end of the spectrum, there are those people who always end up burning the midnight oil owing to the fact that they work better under pressure.

Working solo implies that you need not try to match your way of working with someone else’s rather you can simply do what you like when you like as long as you are following some schedule of your own.

4. You need not hound people to do their part of the job:

Clashes in work style as well as work ethics can cause a number of issues and rather than everyone focusing all their energy upon the task at hand, they end up having an ego battle of sorts where everyone is trying to get ahead and outshine the rest.

So when working solo, rather than trying to force everyone to submit work within the stipulated time, you have to depend on only yourself. Most people find working alone very good as they end up spending less time running after their team members to get their jobs done. Rather in solitude they remain engrossed in their work.

5. There is no added burden of trying to make everyone work as a team:

One of the best parts about working solo is that you need not have the additional burden of trying to get everyone to work together as a team. There are no pep talks, no team meetings, no sorting out of differences, no fights and no other negativity. You just do your own job and have a singular focus on the task at hand.

You know that as a skilled professional it is your responsibility to finish the task which has been entrusted to you and no matter what happens you try and do your best without letting anything come in your way at any point in time.

6. You do not have to share the praise with anyone:

This is something which most people do find very unfair and this doesn’t go down well with them at all, for such people working solo is a much better option as if the project is a success they can enjoy the limelight all on their own.

7. You learn to multi task and deal with a number of things simultaneously:

Owing to the fact, that when you are working solo on a project or a task which has been entrusted to you, you have to look into a number of things at the same time. Since you have no one else to depend upon or even ask for help you have to rely on your own ability and capability.

Though this is something which is easier said than done, yet at the end of the day this multitasking is something that is going to help you immensely in the long run and helps you achieve success in the business world .Also the work submitted is uniform in nature.

8. You are not accountable to any other individuals:

Working in a team implies that you have to constantly consult with others and make sure that they are okay with what you have decided to do and in addition to consulting with the team members it is equally important that you actually take the effort of consulting with your team leader.

Very often when a team leader does not see eye to eye with what you want then chances are that he or she might not be willing to let you go through with your idea, this is something that most people find very irritating and that is the reason why they prefer to work in isolation.

1. ‘A problem shared is a problem halved’:

There is some truth in the common saying that, a problem shared is a problem halved, this being said , it is important to realize that when you are working solo, in the event of feeling low or even frustrated you have no shoulder to cry on and you have to keep pressing on no matter how bad you are feeling because at the end of the day if you do not complete the task there is no one to complete it for you or fill your shoes and it does remain incomplete this is one of the chief disadvantage of having to work alone.

2. There is only your way of looking at things:

Many people say that too many cooks spoil the broth, yet at the same time it is important to note that when you work in alone there is only your way of looking at things, you do not get to look at things from the perspective of someone else.

Therefore when something like this happens, chances are that your project is going to be rather narrow or even rather unidimensional. Many mature people putting their heads together often yield very good results and doesn’t necessarily have to be chaotic.

3. There is no one to point out a silly mistake you might have made:

One of the major disadvantages of working solo is that if by chance you happen to make some kind of silly mistake when executing a plan of yours then there is no one who will be there to point it out to you.

At the end of the day mistakes do happen and having someone to help you even a little bit could really be of invaluable help. If there is no one to point this out to you, then chances are that you might submit this work with this error. Giving up erroneous work is something which never goes down well with bosses.

4. You cannot focus your attention on one thing alone:

It is needless to say that if you are Jack of all trades then you will be master of none. This having been said, it is vital to note that if you work solo then a major drawback is that you will not work all on your own and have your attention divided between various things.

If you are working in a group then you will be able to channelize all your energy on one thing alone because the rest of the members will be looking into the remaining tasks.

5. You learn new things and become receptive to new ideas:

One of the major disadvantages of working solo is that you are very limited in your outlook and you might learn a few theoretical things in the course of your project.

However on the other end of the spectrum, when you are working in a team with others, then you automatically get to learn new things. You might have thought your way of looking at things was the only way, however after working in a team you realize that not only have you been able to make new friends but you have also broadened your horizons along the way.

6. There is no one who understands what you are going through:

In the event of working solo, as mentioned above you will not be able to share your problems with anyone, this having been said an additional thing which you ought to remember is that since you are working alone, there is no one else, whether it is your friends or family who will be able to understand your stress and present state of mind.

7. You are the sole target in the event of something going wrong:

One of the things which you need to remember is that when working solo you are to blame if anything goes wrong and when there is a blunder of any kind , there will be no one standing by your side to shoulder the blame with you. This is one of the major reasons why many people shy away from working solo or individually.

8. You will take longer to complete the task at hand:

There is some truth in the common saying that many hands make light work and this being said it is important to note that when you have decided to work solo all the onus as well as responsibility is on your head alone.

If you want things to be perfect and to receive praises for your work, then you have to personally look into each and every aspect of the project and this is something which is very time consuming indeed. In group projects things are able to be completed much faster.

So after going through the list, it is needless to say that the pros and cons are almost equally balanced out. No matter what you choose, understand that in life nothing comes easy and at all times as well as under all circumstances you must try your very best to deliver top quality work.

As long as you continue to do your best even in the most tiring of situations you will come out with flying colors and people will appreciate all the effort which you put into trying to deliver good work. Hard work yields rich dividends in the future.