So you believe that you have something to say or that there is something which is rightfully yours, then you should have no qualms about speaking up and demanding your dues.

Sometimes it might happen that, you believe that you deserve a raise but you have no idea about how you ought to go about asking for one. If you are confused about how to go about it, before doing anything else you thought to ask yourself these questions at the very onset of things. 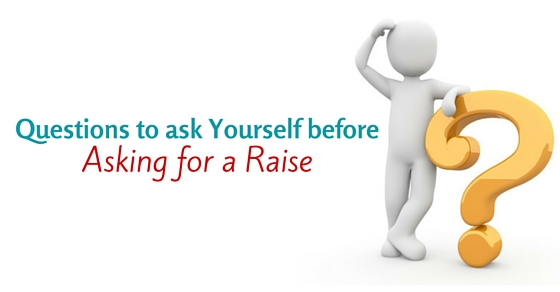 Asking for a Raise? Important Things to Do:

1. What is the salary which my contemporaries get?

First and foremost, it is very important that you ask around and inquires what is the amount that other people in your office are getting, for the same job which they are doing?

In addition to asking around at your very own place of work, what you ought to do is ask your contemporaries from other offices as well, doing this will give you a holistic idea about what is the market value of someone who is at your position.

In the corporate world, you cannot afford to be closed as well as inattentive to what is happening around you. If you are, you will miss out on a lot of opportunities.

If you strongly believe that this is something which you do deserve then you most certainly not shy away from asking for one. Yet at the same time, if you are not quite sure about whether you have really earned it or not then maybe asking for a raise is not such a good idea, to begin with. Convince yourself before attempting to convince others.

3. When was the last time that I was given a raise?

When you are asking yourself questions of whether or not you deserve the raise, you must think along the lines of when was the last time that you had asked for a raise. Two things you must remember is that if it was quite recently that you received a raise, then asking for another so soon, would certainly not fair at all.

Secondly, if it was a long time ago then it is about time that you go ahead and ask for one. You must think clearly and concisely and do not end up coming across as someone who is incredibly greedy as well as money-hungry.

4. For how long have I been working at this company?

When you are deciding upon whether or not you need a raise, then you should consider how long have you been working for the company. Has it been a considerable time? Or are you someone who is a new employee.

These questions might not seem very important at all, yet they are very important indeed and money is a tremendously valuable resource in the business world. If you are new at the company, then you should wait a little while before you go right ahead and ask for a raise.

5. Who should I speak to and ask for a raise?

In the event of being sure about what you want then you should consider going up to your boss, senior or manager and ask him or her. You must know exactly who to ask for a raise. When you are asking for a raise you shouldn’t tell everyone about it and go about it discreetly.

The fewer people that come to know, the better it will be for you. In any way this is something between you and the company, telling others about it is most certainly not going to help things go faster or make things easier in any way.

6. What should I say to convince them?

When you go to speak to the person concerned, it is important that you say the right things and do not end up making a fool of yourself. You should ensure that you confidently speak to your senior so that he or she takes whatever you have to say seriously. If you have no conviction or self-belief then no one is going to take whatever you have to say seriously.

So when you go to the senior ensure that you have some distinct facts as well as figures in mind so that you can impress the senior. You mustn’t be in any way apologetic at all. Hold your head up high at all points in time and you will command respect.

7. What should I do if they refuse to give me one?

Now once you have spoken to the seniors you must wait patiently to hear from them again. There are only two options before them, either they accept your plea for a raise or they reject it. Accepting it means that they respect you as a worker and they want to keep you happy so that you cannot even consider looking for employment elsewhere.

Yet, on the other hand, them rejecting your plea for a raise could imply some things, the most important thing they think that you are already being adequately paid and that you do not deserve a raise. If being rejected is a severe blow to your ego, then maybe you could consider handing in your resignation.

8. Should I ask for any additional benefits?

In the event of your plea for a raise being rejected you could consider asking them for benefits of other kinds which could be a compensation of sorts. Chances are that your seniors will not reject this offer.

The extra benefits could be in many different forms, like pick up and drop facilities, some coupons, gift vouchers, health insurance for yourself or your family or even a paid vacation.

These things are just basic benefits which people get anyway so if you aren’t getting them, then you ought to speak up for yourself and get what is due to you. A company that values you will look into your every need.

9. Should I consult with my co-workers as well as colleagues?

As has been mentioned above, telling as few people as you can, will be beneficial indeed, yet this being said if you want to gather some information then speaking to your co-workers is not a sin at all.

You can ask your co-workers how the seniors react in general when they approached by employees with pleas for a raise. If the seniors are open, receptive as well as attentive to the needs of the employees then you should go right ahead and ask them without having any qualms or inhibitions, yet if they dislike it greatly then you should think along the lines of whether you want to ask for a raise or not.

10. Will be asking for raise, create a stir in the office?

Another important question which you ought to ask yourself is that in the event of others finding out will there be a stir in the office? Companies will certainly not take it lightly if you request causes an uproar or a rebellion of sorts.

So ensure that whatever you do, you do in a discreet as well as polite manner. This does imply that you are sly and secretive about what you are doing, it just means that you do not make a production about this request which you have decided to make. In the business world, you cannot afford to be silly and stupid about how you behave. You should think and act wisely.

11. Am I coming across as being much too forward?

Being bold is a good thing, yet coming across as rude and too forward is most certainly not. When you work in a big company it is expected that you respect the status quo and talk as well as behave in a decorous manner. If you are mindful of how you act then you will go very far indeed.

So think about whether you, asking for a raise might come across as you being too forward and think if this is something which will go down well with your bosses or not. This decision is entirely your own, so you shouldn’t get too taken in by what other people might have to say to you.

12. Is the company in a position to give me a raise?

Before taking any kind of rash steps, you must ask yourself, is the company even in a position to give me a raise. Sometimes companies do go through dull periods and at such a time it is very unbecoming and unprofessional of you to go ahead and ask for a raise. If you are loyal and work well, then in better days to come, the company is bound to pay you to manifold for sticking on to them in their time of difficulty.

13. Has my value to the company become considerably more?

You should not even think of asking for a raise if you have not increased your contribution to the company, considerably since the last time you received one. You must constantly prove your worth, rather than just blindly expecting raises from the company.

14. How much increment should I ask my boss for?

Once you have mentally decided that you will ask for a raise then you should go ahead and think in terms of facts as well as figures. Chances are that your boss is going to ask you about how much of a raise are you thinking of and in such a situation it is advisable if you have a figure in mind already. It is from this point that the negotiations can begin.

15. Do you feel overworked and underpaid?

If you are someone who wishes for a raise then you should ensure that you are not meeting timelines, rather you are exceeding expectations by far. You must prove that you are a true asset to the company.

At the end of the day, you must not feel shy about asking for a raise as if you think that it is something which you deserve, and then there is no harm in standing up and airing your opinion.

What you must remember is that if you speak more for yourself as well as stand up for what it is that you believe in, then people will respect you and they will start taking you very seriously indeed.