According to a famous saying, “It’s not how we make mistakes, but how we correct them that define us”. Each and every one of us can fudge up every now and then but what matters the most is how we deal with it and recover from the dent.

It is true that after making a mistake many of us do not feel like admitting the same and fear that if done so, our reputation amongst our colleagues and management would get hampered and we would lose respect at the workplace.

But instead of sitting back and feeling afraid to commit the mistake, one should come in front and take all due steps to recover from making a fool of yourself. 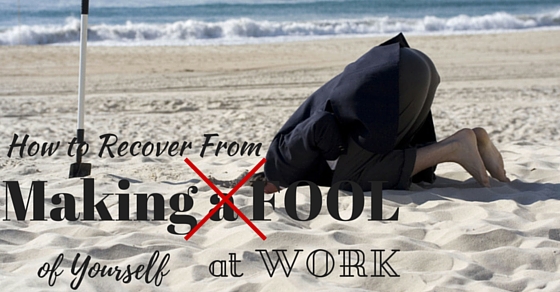 Steps To Take After Making a Fool of Yourself:

After committing a mistake at the work place, one should be confident enough to go ahead and take the ownership of the same. Doing so would make things easy and smooth for him/ her. It is rightly said that committing a mistake is not as fatal as not learning from them is.

None of us is perfect, we all do commit mistakes and sometimes make a fool of ourselves in front of our colleagues/management, but this can be repaired, the damage can be mended by taking the following steps:

It is very important to be easy at heart once the goof up has been done. Unless and until one person does not forgive himself/ herself, they cannot expect the others to do so. It is often seen that after committing the mistake, the concerned person goes low on self confidence and tries to maintain a low profile. This should not be the case.

He/she should forgive themselves in the very first place, and then only there would be room for the others to do so. It is recommended and advised that one should not give themselves away so that the others can take advantage of their mistakes and use it as a step to rise up.

Be bold and confident and forgive yourself then only others would do so. Remember, there are hawks sitting in the corporate world, which are continuously on the outlook of other person’s mistake and using that situation for them to rise up.

2. Take ownership of your mistake:

Confidence is the key here. The damage has been done and it’s time to rectify the mistake. Be confident enough to step out in open and take ownership of your mistake. This confidence means half the battle is won.

Once the mistake is admitted in front of the colleagues and the management, required steps can be taken to rectify the mistakes and move forward in a positive direction. Such an act of ownership also creates a sense of responsibility in the employee. The colleagues and management would look up to the employee with respect if they dare enough to accept their mistakes and take the responsibility to rectify it.

It is important to acknowledge the mistakes in front of those who got affected by it and this should be done without any blame game. Once the ownership is taken, corrective step should be taken to rectify the mistake. One should not try to dodge his responsibility.

There are many in this corporate world, who is keeping a close watch on the actions. One should be a model of professionalism and should take up the responsibility for their actions. This experience should be used as an opportunity to set the standard for open communication.

3. Apologize to those affected:

Once the mistake has been admitted, the employee must apologize to all those who got affected because of the mistake. It is important to do so in order to maintain a sense of professionalism among the team members and for setting up an example so that the team can openly communicate among themselves and support each other.

The best thing to do after committing a mistake is to call for a meeting which would comprise of those who got hampered due to the mistake and openly admit the mistake. An apology should also be asked for the same and corrective steps to be taken should also be discussed.

It should be clear and evident from the actions that a lesson has been learned from the mistake and that the same mistake would not be repeated again. An example must be set up in front of the peers of how to amend the mistakes and the learning to be taken from the mistakes.

After rectifying the mistake committed, the attitude of the employee should be positive enough. A positive person at work radiates positivity. It is a well known fact that people at work would like to be surrounded by positive people rather than negative ones. People respect honesty and integrity and they will with time accept the mistakes.

The fear of getting a fool made out of themselves withholds many from doing such things. This fear does not let the actual potential of a person come out and stop them from undertaking new or difficult tasks. Few of the repercussions of such fear are as under:

2. They keep themselves away from speaking for their right and about the things that matter to them.

3. They do not act themselves and become pretentious at times.

4. They do not utilize their caliber and thus the human resource in an organization remains underutilized.

So the next time don’t worry about making a fool of yourself. By not worrying about it, you’ll avoid over-thinking, remain confident and act like yourself.

How to Keep Oneself Motivated after Making a Fool of Themselves:

Once the mistake is made, the employee should not lose heart and should re gather himself to face the situation and solve the problem. He should work towards the repair of the damage done and also look out for help if necessary.

He should keep himself motivated towards amending the mistakes. Following is a list of few reminders which would help the employee stay motivated and would in turn help him in executing his tasks successfully.

If after committing a mistake an employee admits it, apologize for the same and take steps forward to rectify them. The positive approach towards solving the current issue plays a very important role here and the employee need not worry or panic.

On the other hand, things should be handled with more precision. But this doesn’t mean that it’s OK to make a mistake. Although the mistakes can be amended, all due steps should be taken to avoid them.

When a person fails in a specific task, gathers himself up and moves towards rectifying his/her mistakes, then only shall be able to get success. When one makes a mistake and wants to rectify them, in that case they shall learn from the mistakes and would re perform the task and achieve success. Remember, failure is the first step towards success.

Committing a mistake and being confident enough to admit it and mend it for betterment will ultimately lead to a positive environment. On top of it all, the mistake is successfully modified and positive results are achieved, then it leads to more positivity in the workplace.

4. Each mistake teaches something new:

Every mistake or goofs up teach something new. That is why an employee must not be scared of making a mistake and shouldn’t try to hide it. On the other hand, they should be open to learning and ready to inculcate new ways/ methods of performing the tasks for achieving better results.

Once faced, the employee may realize that the mistakes are not as bad as they seem. They tend to teach us something or the other every time and make us a better person altogether. In order to be able to learn from mistakes, the employee needs to be bold enough to accept his mistake and rectify the same. If taken in the correct way, mistakes make the employees stronger.

In order to excel in the task, one needs lot of precision and practice. And if an employee is working hard on a given task and is striving for a better result than it is natural to make a mistake. What is important is that once the mistake has been committed, the employee must admit his mistake and take all due steps to amend it. He should also take care not to repeat the same mistake again in the future.

7. Committing mistakes means that progress is being made:

It is rightly said that those who work make mistakes. Unless and until an employee thrives to move forward, learn new things at work he would not make mistakes. If he keeps on performing the monotonous tasks every day, the chances of making a mistake are much less than in the case where new tasks are undertaken every now and then. Thus, mistakes in most of the situations depict progress.

Factors which Induces an Employee into Making a Fool of Himself:

All of us tend to make mistakes, some are minor, some are major and sometimes we end up making a big fool of ourselves. Such kind of situation may occur because of many reasons, but the major one is when we work under pressure.

In such a case, we end up doing a wrong act at the work place. It is a well known fact that under pressure people do not tend to give in their best performance and this finally leads to goof ups.

Having discussed how to handle a situation where a blunder has been done and the employee has made a fool out of himself, let’s have a look at few of the instances which lead to such goof ups. Following are few examples which can lead to blunders at the work place:

1. Over thinking about the Solution:

When anyone keeps on thinking endlessly and over thinks about any solution, they tend to create excessive analysis, there by wasting their energy, resources and time at work. Such over thinking must be avoided in order to stay away from blunders at the office.

When a person becomes nervous while doing their work, they tend to lose their confidence and commit mistakes; such nervousness shall be avoided in order to reap better results.

When a person is being pretentious, his/ her colleague would realize it and would come to know about it instantly. They would know that there is something wrong and this would end up in making a fool out of him.

So the next time you feel a little under confident at work, be patient enough and handle the work situations tactfully and give in your best shot. And in case any goof up has been done and you have made a fool out of yourself, try not to hide it and handle the situation tactfully.

Be brave enough to admit the mistake, apologize for the same and take corrective steps to rectify the mistake. Look out for help from colleagues if required and then maintain a positive attitude at work. Positivity should be radiated at the work place and this would for sure make the work place a better place to work.