We all know that communication is a process of exchanging information in the form of speaking or writing. Communication is one of the reasons for the existence of this world.

Without communications, this world would seem lifeless. Communication is all about how effectively the person can convey the message in the best manner. 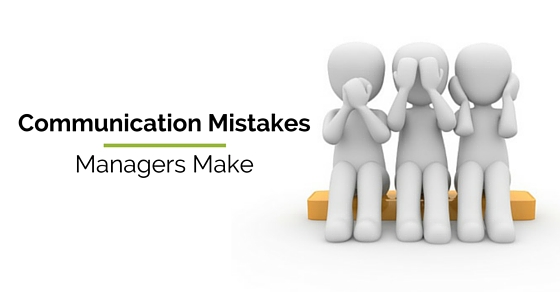 A leader should be so good at speaking that he should be capable of making people follow him as he is the one who guides the whole team towards the right path encouraging them to achieve the goal.

Mistakes do happen in communications and even managers or leaders can commit such inaccuracy. Following are some of the communication mistakes managers make:

While communicating a person should use correct body movements and gestures. This is one of the common mistakes managers make. The following case can help understand this better.

A manager was explaining the project and fieldwork to his employees but he was sitting in the chair with crossed arms and was speaking with closed eyes, also in between whenever he was maintaining eye contact, he would see only one employee.

Now in the above case, the manager did not even stand while communicating and it seems that he was not so interested in the meeting. He has just marked his physical appearance there. So, this is one of the very bad forms of communication.

One who speaks well doesn’t need to convey well. Yes, it is true because this is another communication mistake made by managers. Some use very high vocabulary while delivering a presentation but they forget that communication is best when doing easily so that everybody can grasp the message.

“The deadline of the project is bordering, so I want you all to stockpile in a foremost manner, get ready to hammer out a deal.”

The above words of a manager to his employees may be difficult for some to understand. The manager could have simply given the reminder by saying “We are almost reaching the deadline of the project. So be ready with all your work for the scheduled meeting”

Sometimes a message can also be badly expressed. It is like, a person wants to say something but they also don’t want the other person to feel bad. For example:

“ You have to be regular from tomorrow, and you did a great job in the previous project, it showed that you did quite a great hard work, so be on time from tomorrow onwards.”

Now the conversation of a manager with his employee was supposed to be a warning for the later as he is always late to the office but the manager is adding too many pillows to the talk that is not clear what exactly he wants to convey, is it a complaint or is it a compliment. So, a manager should always speak to the point.

It is very important to use the correct form of communication with the employees. There are two types of communication, one is verbal and the other is non-verbal. Sometimes managers do not make the right move while communicating.

It would be very awkward if a manager is talking to you by standing close to you or by keeping a hand over the shoulder or even speaking very fast, it would be an inappropriate type of communication.

Basically, for following a good and convenient style while communicating, a manager must follow the concept of KOPPACT which is an abbreviation uses as following:

5. Sending Emails For Even Small Reminders:

Why would I send an email for a reminder when I can simply talk to that particular person or employee or put up a notice on the office board. Sending an email to each employee would be a time waste.

For reminding, I can just simply call a meeting. Sometimes managers even deliver bad news through emails. Sending an email full of errors would be a blunder.

6. Failing to Offer OR Solicit Feedback:

Sometimes younger employees working in an organization expect an appreciation for their work. These freshers look for a compliment from the managers to gain confidence, also they ask for such interaction so that the boss could tell them their mistakes and that they can improve for the next time. But many do fail to give feedback which results in repeated mistakes by employees and dejection.

Working in an organization does give a manager the right to ask questions to his employees but asking too many questions can spoil the whole thing. Though the employee would keep on answering the question inside he might think the manager is frustrated.

Even during some of the interviews, the manager keeps on shooting with the questions. This may seem awkward but employees will enjoy the cross-questioning only if it keeps simple, short and to the point.

8. Underestimating the knowledge of Employees:

How would you feel if someone keeps on speaking and does not give you a chance to be a part of communication? This is another mistake made by managers. Sometimes managers think that in the room only they are the ones who have a par knowledge and rest are those who would follow what he says.

Well, everybody should give room to speak because you never know when a new idea strikes someone’s head. Managers do underestimate the knowledge of their employees sometimes because they feel they are superior and they have the proficiency.

9. Not Preparing before Speaking:

The clients have certain expectations when they hand over a project to the manager. Now it should be the sole purpose of the manager to give 100% so that clients get what they want.

It is not only with clients but also with employees, whenever communicating, it should be in flow and not a hesitated one. This shows that the person did not come prepared. It does not matter how knowledgeable the manager is but if he does deliver a presentation without preparing then it is all useless.

Even the orators do practice before delivering a speech so a manager has to be on his toes and excellently prepared. Coming unprepared is a sign that the person did not do his research and hence he is hesitant while speaking.

Sometimes such situations do arise where the manager question by the employees, be it the failure of the project or any controversial announcement made by him. In such times most of the managers make mistakes by answering and getting caught in their lies.

There is only one way to handle such situations and that is to be neutral and better avoid making conversations by saying, “I don’t want to comment on this” or “I can’t answer that fully now”

11. Ignoring the Realities of Power:

Being casual during the meeting or presentations is the most dangerous because this leaves a negative message in the minds of employees and the exact message is never conveyed. The relationship between the manager and the employee should be a game of balancing. Giving the employee too much comfort zone or being too rude can ruin the office atmosphere.

So, casual behavior can be played outside the organization but inside it should be formal boss-employee relation.

Time plays a very crucial role in everybody’s life, once it flies will never come back. Sometimes managers do not sync the time with what they speak while delivering a presentation, this creates chaos and blunder, and in other words, it seems hotchpotch.

A sense of time helps to indicate the starting and ending of an event. So, while speaking a manager should always speak co-ordinating with time otherwise the message can be misinterpreted.

The human communications are imperfect, but there can always be improvements made by working on certain areas of communications. In conclusion, the best way is to follow the rule of KOPPACT as mentioned above.