Many individuals across the globe will tell you that money isn’t everything in life. They will insist that job satisfaction is way more important. Besides money, there are so many other things which influence a person’s career choice.

Of all the many things that people need to take into consideration when choosing a career, three of the most important things include the influence of family, gender and even parents. Given here are some of the chief factors that influence an individual’s career choice. 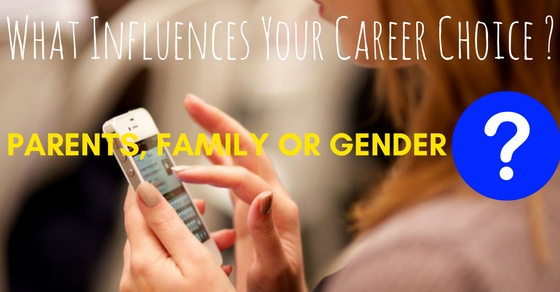 1. The salary which the career offers:2

Nowadays it is impossible to survive without money. Those individuals who have unsteady modes of income find it very hard to live a proper and comfortable life.

Money is, therefore, one of the major factors which influence career choice, as mentioned above. This having been said, this should not be the sole factor which you keep in mind when making a career choice.

To pick a career you must look into an array of factors if you wish to make a proper and holistic decision that will keep you both happy as well as satisfied in the time to come.

2. The demand for people of that career:

Based on how much demand a particular career has, people either choose to pick it or not. If a given career line is not much sought after, then it’s unlikely that people choose to opt for it.

Different countries have different job opportunities and a job which might be much in demand in one place might have absolutely no value in another country. So it is based on this factor that many individuals choose their career.

In some locations, machines do a lot of work so there is no need for manual laborers, but there are few other countries that cannot afford such expensive machines, their workers are necessary to keep factories functioning.

3. The possibility for growth in the coming years:

There are some very promising careers and that is exactly why many individuals choose to opt for that line. Several careers which were so sought after maybe 10 years ago are completely out of the picture. It is for this reason that when choosing a career you think about whether its time to come out as such a line will continue to be in existence or not.

One wrong move when taking career related decisions could end up ruining your life in the long run. The future promise which a career holds is a major factor that does influence people’s career choices.

4. The educational qualifications required for the job:

5. The individual’s likes and dislikes:

A person’s likes and dislikes do function as a major factor when it comes to picking a career. If you know that you hate talking then you should surely shy away from careers such as teaching, being a lawyer or even becoming a professor. Do something which you love doing and your job will be a lot of fun for you.

6. A person’s skills and abilities:

When picking a career the skills which you have does serve a major deciding factor. If you are lacking in self knowledge then you are likely to pick a career that will not be in keeping with the ability and potential which you have.

Many people pick a career based on the results which they get to various aptitude tests. Doing this is a very smart move indeed as you will be making your decision based on concrete facts and evidence.

In addition to this, after taking their aptitude tests many individuals consult a career counselor, they present them with the career options that are most suited to them based on their IQ and personality.

1. Through the examples which they set for their children:

Right from birth, it is our parents that take care of us and serve as examples for us to follow. If our parents have successful careers and live a good comfortable life, it is likely that rather than trying to pursue any other career, we would prefer to follow in our parent’s footsteps and pick up from where they have left off.

The examples which our parents set for us, whether good or bad does a great extent influence our career choices. Even if our parents have not been successful in their careers, it is their life which serves as a lesson to us, encouraging us not to make the same mistakes which they have made in their careers.

2. Through their own hopes dreams and expectations:

3. Through their attitudes to various careers:

Many parents especially some conservative ones, will never let their children follow their hearts when it comes to picking a career. They will make it a point to try and force the child to pick a line which they approve of.

In the last 10 years, there are many new jobs and career possibilities which have come up, which many parents might not even be aware of. It’s for this reason that even if the line is very promising the parents are very disapproving of such careers.

A parent’s attitude does influence a person’s career pick, especially since all of us want to make our parents feel proud.

4. Through the education which they give their children:

Parents who do want their children to do well in their career as well as in life, make it a point to give their children a good education. The school you go to and the friends you make at school do play a major role when it comes to helping you make a career choice.

5. Through the qualities they instill in their children:

Parents do have a major influence when it comes to the career which their children pick, this is in terms of the fact that if parents instill their children with many positive skills and qualities, then that automatically enables their child to pick a promising career line.

If an individual knows that he is lacking in skill and ability he will naturally opt for a less glamorous job option which he knows will suit his personality and upbringing.

For example, if a parent trains the child from a very young age to argue sensibly and logically, the child will likely grow up with the quality of reasoning and debating, so he will probably opt to become either a lawyer or politician.

1. The amount of money you are expected to make from the family:

Whether consciously or unconsciously, our family or our family situation in general, does play a major role as far as our career related choices are concerned. For many individuals across the globe, they are made to pick a field, simply based on how much money they need to make two ends meet on the family front.

It often happens that many individuals who desire to choose unconventional career fields like photography, dancing, singing, painting or even writing might be unable to follow their dreams because they know that such career lines do not always pay well. At such a time they rather focus their energies choosing a field which will enable them to provide for their family.

2. Influences the amount of time you can dedicate to your job:

Our family situations and demands do influence our career choices in several ways, one of the major ways in which it does so is about the number of hours it allows us to devote to our job.

If for example you have four kids and you are a single parent, it is unlikely that you will be able to take up a night job. If you do take up a career involving a lot of work hours, the question arises as to who will take care of your little ones and if you hire help, will this help be reliable? Things like this do influence our career choices whether consciously or unconsciously.

3. Determines whether you need to work from home or not:

In some careers working from home is no big deal at all. However, in other career fields, the individual must come to the office to get the job done. Content writers, painters or even bloggers have the liberty to work from home, yet primary school teachers, chefs, and even office managers have to head on to their place of work if they wish to fulfill their job descriptions.

The gender stereotypes that play in the professional world:

Whether we would agree to it or not, gender to has a major influence on our career choice. Around the world, there are various gender stereotypes at play and from a very young age, we are encouraged and even trained to adhere to these gender stereotypes whether we like it or not.

If in a particular field women are preferred for a job, then it is likely that the men will always be offered a less salary. On the other end of the spectrum if men are preferred for a given position then the women are invariably paid less. It is mostly women who are made to feel that they are incompetent and will not be able to do the task as well as men.

Nothing is ever certain in the business world. If you wish to succeed in life you must turn a deaf ear to what others are saying and pay attention to what your heart is telling you to do. Irrespective of how strong these various individual influences are in your life, you must ensure that you do not let them take unnecessary control over your emotions. If you do through your life trying to live up to the impossible expectations of a third person, you will never be able to find true contentment. Constantly trying to silence your inner desires is surely going to make you have many regrets in the time to come.