Working in a prestigious office seems like a dream come true but dealing with a bossy coworker may set you for a big headache. Tolerating these kinds of people seems difficult, sometimes it even works against you in the office.

These kinds of people know no limit and do anything to irritate the hell out of their co-workers. It often happens that people don’t know how to deal with this kind of people in the workplace and succumb to their wishes which harm their career in the long run, even in few cases situation go out of hand and become intolerable for the good workers. 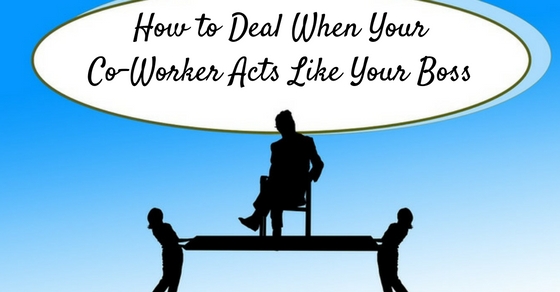 The big question is how to deal with co-workers acting like a boss in your workplace? To deal with the bossy co-worker you need to use your patience, smartness, and attitude in the right direction.

Don’t do something which may cause problems for you to deal with in the office with other colleagues as well as higher authorities. The first step in dealing with a bossy co-worker is to identify them first. To identify bossy co-workers use these simple steps.

1. Does your co-worker trust you?

The very first thing you must know when you analyze your co-worker is that they trust you? It happens sometimes that due to your previous work or lack of deadline meeting in the last assignment of your work, your co-workers start to mistrust you and dim you unfit for the job.

If that is the case then prove you are worthy of working on your own without confronting your co-workers. Trust is what makes your co-worker stand back and not to interrupt you in your work.

2. Do they take your decision?

3. Do they interrupt you at every point?

To know if your co-worker is bossy or not, check if they interrupt you all the time in your work hours or you are just assuming by your perceptions. Some people like to interrupt in other’s business even without knowing that they are crossing limits by doing so and some do it on purpose to distract you.

Make sure what your co-worker doing is bossing you around, not just the friendly nature of conversing at every given opportunity.

4. Do they insist on making change even before seniors check them?

5. Do they make you feel like a child in your workplace?

Do you feel like a child when conversing with your co-worker? Or they belittle you at every given opportunity? If this is the case then it’s alert, your coworker is trying to boss you around by intimidating you or by making you feel like you are not fit for the job.

It can be their tactics to take your place and project in the office by making you question your confidence level and decision-making power.

6. Do they pay more attention to you than their work?

Some people think so highly of themselves that others are an idiot for them which causes them to pay attention more to others’ work than their own. This kind of people love to boss around and do not want any suggestions and ideas, they just love to show they are more intelligent.

After finding if your coworkers are bossy or not it comes to how to deal with them? To deal with your co-worker use these simple steps so that you can avoid such kinds of colleagues without creating a messy situation.

Tips to Deal With Co-Workers Acting Like a Boss:

If you know that your co-workers are trying to boss you around or someone particular doing it then stay alert and wary of them.

2. Have a strong backbone:

Standing up for your self is what most people need to deal with a bossy co-worker. Some people bend on slightest pressure from others, this gives the wrong indication to others and they use this opportunity to boss you around.

Stand for your self, put down initial efforts of bossing you around and handle the situation before it goes out of your hand.

If you give them a finger they will try to sit on your shoulder. This happens when you give space to others and they use it to be your boss. Avoid giving them space so that they cannot boss you around, don’t leave anything for them to use against you and do your work according to the instructions from your manager.

There is nothing you can do if you fight them when your co-worker bosses you around. Fighting back will create a scene in the office and it will look bad on your part. It may cause you mental stress but fighting is not the way how you deal with these kinds of people, they will use it against you and will fit you unworthy of your position.

5. Use your humor as battle armor:

When it comes to a co-worker who behaves like your boss humor is the way to keep them at an arms distance. When you say something in a way that it looks like you are saying something funny, it will cause less stress in your relationship with your colleagues and they will know that you can handle your work very well.

Warn them with a smile on your face but say your words firmly so that they can understand what you’re saying without causing drama.

6. Consider their point but take the decision yourself:

If your bossy co-worker doesn’t take the hint to stay away then have a private talk with them. Talking in public places may create a scene and bring unwanted attention from your colleagues which is not suitable for you.

Take your bossy co-worker for a tea break or lunch outside and have a conversation about their bossy attitude and tell that you are well capable of your job that’s why you are appointed for the job. The private conversation gives you space and time to say what you feel without causing a scene in your workplace.

Setting necessary boundaries are important for your workplace and co-worker. When you let anyone interrupt you in your work people start to boss you around. You are here to work so only work and set boundaries for others and for yourself so that they know to keep their own business.

Sometimes it becomes necessary to let others know that you are here to work and no one can tell you how to do something other than the boss. Setting boundaries also help in improving your work as well.

Involving superiors may go against you if you have a bad work reputation in your workplace so improve yourself first and use the above suggestion to ward off your bossy co-worker. Keep it for last and only involve your boss when you feel like situations are out of your hand and you cannot handle it on your own.

How Not to Deal with a Bossy Rude Coworker:

Arguing is not the permanent solution and it gives space for others to talk. Never show how affected you’re by arguing on the spot, this is not the way how professionals deal with the situation. Use your mind not your tongue to solve the problem.

The creating scene in your workplace is like being your enemy, it will present you like someone who doesn’t listen and fight for a small thing. The creating scene will never solve your problem even it gives a chance to your bossy co-worker to prove how incompetent you are to handle your work when you can’t handle your temper.

Talking behind their backs will never do any good for you especially in the case of your bossy co-worker. It will present you in the wrong way in your workplace and chances are someone does the same for you. This is a bad habit and causes so many problems to deal with. Deal with your bossy co-worker in a way that solves the problem without leaving a stain on your image.

5. Don’t try to spoil their image:

Spoiling image of your bossy co-worker will do no good for you. Spoiling their image is like throwing a stone into a mud pit, you are going to stain yourself as well. Solve matters like an adult and a responsible employee.

After discussing how to deal with the co-worker who bosses you around we can only say that dealing with a bossy co-worker is a tricky situation. One wrong move on your part may present you in the wrong way. This is the matter which needs to be solved without creating a scene and drama in your workplace.

We hope this article will help you in dealing with a bossy co-worker in your workplace.