Conflicts are as natural as love in life. If there are humans there will be love and conflicts, its good to have conflicts in your life as it helps in maintaining freshness and keeps us motivated to move ahead in life but when conflicts take a shape of a fight then it becomes problem.

Two people can never be agreeing on everything in their life, they are bound to have some issues and problems between them. 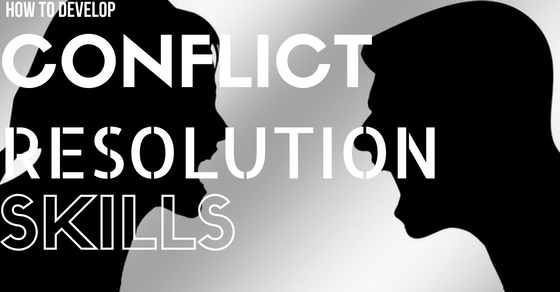 When two people disagree on something due to their own thinking, perception, misunderstanding, and lack of trust which causes a rift between them especially and leads to problems is called conflict.

There is no particular reason for conflict to occur between two people, anything can cause conflict and the biggest reason that generally creates conflict is a different way of thinking but, it can have multiple reasons to have a conflict between two people.

Conflicts occur due to various reason but it needs to resolve on time as well as efficiently because resolving conflict is a sensitive issue and poor resolution skills can lead to higher stress level and lack of concentration. Even in some cases conflicts that go out of hand cause serious damage.

To develop conflict resolution skills you need to learn a few things and one of them is patience. It’s all about dealing with the situation in the best possible way so that you can find a solution which can resolve problems.

Here are a few simple steps to develop conflict resolution skills which can help you in resolving conflicts easily and effectively.

Most conflicts occur when one party refuses to listen to others so it is an important skill to develop when it comes to resolve conflicts. Listening carefully also help in calming the heated situation as most people lose their temper when others refuse to listen to them.

So listen carefully when there are conflicts and your half of the problem will solve then and there, without much effort.

Most people choose to argue when conflicts occur due to any reason which complicates the situation and if they listen before they say something then most of the conflicts get resolved without doing anything. Listening carefully gives you the power to deal and a better understanding of the reason for conflicts.

When you go for conflict resolution the first thing you do is understand the conflict and the reason why does it occur? There are so many reasons which can cause conflicts and it can vary from mild to the level of fighting.

Communication is an important skill in resolving conflicts effectively. Good communication skill is what you need to make both parties listen to you who have conflicts between them. Communication provides a window to share thoughts and problems as well as the reason why they are having conflicts.

Finding a solution can only give closure to the conflict otherwise, it will rise again with deeper issues and problem, and it will be more difficult to resolve the conflict. Brainstorm the best possible solutions, their outcome, and the chances of how acceptable these solutions will be in resolving conflicts you are dealing with.

7. Keep focus on the future but don’t forget past:

Generally, when two people have conflicts it has its links to the past incidents and future outcomes. When you try to resolve the conflicts between two keep your focus on the future and what will be the outcome of present actions but never forget or ignore past events as they play an important role in causing conflicts most of the time.

Past problems, disagreement, fights and old issues mostly cause conflicts that lead to the future so keep your focus on the future but don’t forget about past events and incidents as they can help you a great deal in resolving the conflict.

8. Choose a solution which can be accepted by both:

Resolving conflict is not the easiest task, it needs a lot of time and energy to do so. You need to brainstorm solutions that can be accepted by both parties, work on finding a solution during the resolution process and discuss it with both parties individually so that you can make the necessary changes as according to the situations without causing more problems.

The goal of resolving conflicts is to choose the solution which can be accepted by both parties so that resolving process can be fruitful and you get success in resolving the conflict.

If you are having your doubts for the solution you choose to resolve conflicts then involve third party mediator which can be trusted by both parties as well can give a fair and honest opinion after listening to both parties.

The involving mediator also helps in verifying your solutions that you both are agreeing on and you can use it for future reference as well when conflicts occur again.

10. Do explore other alternatives:

Flexibility is what will help you more in resolving conflict than a rigid approach as it will provide more space for adjustments. Don’t stick to just one solution as it makes the situation more rigid and hard to change later on.

Do explore other alternatives to resolve conflicts as it will provide flexibility to your decisions and will help you later on if something occurs again. Other alternatives also help in knowing pros and cons of your solution and help you in making a most suitable decision.

11. Cope with pressure and stress:

12. Be confident and creative:

Being a coward will never help you in resolving conflicts as it will give a chance to another party to dominate the situation. Be confident and use your mind to solve conflicts in a creative manner.

Sticking to old strategies may not work with the new environment and ever changing time to resolve conflicts effectively so be a little more creative than usually you are for example go for a coffee to talk and finding out a solution for the conflicts, that way you will have more opportunity to discuss things clearly.

Your confidence is what makes other to listen to you and to cooperate with you, be confident about yourself and your abilities.

13. Do not postpone conflicts:

Postponing conflict gives space for more misunderstandings and miscommunication to occur between both parties and it will only cause damage in already complicated issue which makes hard to resolve it.

Postponing conflict is like postponing treatment for the wound which will catch the infection if not gets immediate attention and medical help, similarly conflicts take the shape of the fight and heated argument if left unresolved.

It will only cause problems for you to deal with so never postpone conflicts for another day and if by any chance you cannot resolve it on time then do it immediately as soon as you got time and opportunity.

After discussing all possible ways to develop conflict resolution skills, we can only say that resolving conflicts are not as easy as it seems; you need to deal with patience, calmness and confidence to find a solution. Skills we discuss above are what you need to develop to resolve conflicts.

We often thought conflicts are bad but they have a better part on another side as well, it just needs you to look carefully. Most conflict occurs due to a different way of thinking and we refuse to accept other’s point of view which leads to conflict but if we listen and discuss we may have more option to look and more chances to improve.

Listen to others and give space and time that way, you will face fewer conflicts to deal with as well as accept that sometimes it is good to have conflicts to maintain freshness and to know more about the current situation with different perspective. For example, you have a conflict with your colleagues on presentation and you both have a different approach to a deal which gives you a great opportunity to try other approaches than only yours. So learn to accept and develop conflict resolution skill with the help of our article. We hope it will help you.