Every individual owns a reputation which follows us to every place. The term reputation is one topic dissertated by almost all people in the industry.

A professional chatter or a bruit can bring in a negative impact in career life. Warren Buffet states that nearly twenty years is required to formulate a reputation and just five minutes is ample to destroy it.

So, reputation plays a key role and individuals should act in a different way in order to safeguard reputation.

Let’s sail through the topic and bring out a few points about repairing one’s reputation at work. 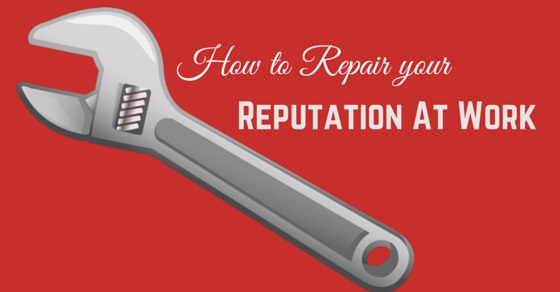 Strategic Ways to Recover from Bad Reputation at Work:

Regardless of what you have done, you require being humble and also apologizing to ones who are stirred by your negative impact.

There is not a requirement to apologize to your boss for what you have done, but you really need to acknowledge that you realize the issue.

To avert ruining your reputation and also to end fights and conflicts apologizing can be a great tool.

It also anticipates that you know workplace behavior. An apology shows that you really realized your fault and would never repeat again.

When you’re guilty about your negative task and an air of your issue is whirling around, then try to make some betterment and stick to it.

Improvements should be made where you went wrong and kept in place. Steadiness is the only way others would believe and trust you that you’re amending yourself.

Skepticism is developed when certain people are not able to sustain change or overcome their negative issue. It is also important not to converse about changes, but execute and adhere to it.

CEO Wyche states that one should admit wrong doings when it occurs. Though it may be an evil-doing of bad judgement, Wyche mentions one to be honest and admit the bad judgement. By this way the situation is not made hotter.

Author of ‘elements of Power’, Bacon says that deniers are never trusted. Whatever excuses are given, deniers are not forgiven and it really makes the situation worse.

Bacon also mentions that you should explain what happened instead of making excuses about the issue to others.

When you have decided to make in changes for you negative tasks make sure you don’t overcompensate for the same. Slathering people with unneeded actions and attention can be avoided.

All these would make sure that you won’t do it. To repair reputation, it would be good to avoid overcompensating.

Remember to avoid doing things which may push you to lie later. When you think you can’t handle it later, avoid doing such things.

When you’re asked for something, tell the truth unless it’s a confidential matter. If the matter is a confidential one, explain the situation that you may break the rules.

Being an open person and when you have no secrets to detect, then your reputation can be repaired and you can shine through.

Choose an answerable partner who can help you at times and whom you can believe in. Discuss about your reputation with your partner and also ask him for tips which avoid you becoming a repeated offender and keep you going forward.

Also ask your partner to monitor you and pull you back when you step into issues.

It is never mandatory to trust someone only in your company, it can be anyone with honesty from your part being the main tool.

8. Get good people around:

People with whom you broke because of your reputation would never be in your presence. So it is important to find people with good integrity outside the organization. Make it a habit to get along with good people and adapt their behavior.

Spending time with such people and picking their brains and observing their outlook can help you get noticed.

There are situations where you get angry, chafed, foiled and distressed. It is always a good tip not to react in those moments, take time and leave the place and get back after you’re cooled down.

Always make sure to excuse yourself for leaving the place and be polite in whatever you do.

Speaking up at angry moments may ruin your reputation and all these bad attitudes will present you in lacking confidence. Repair your reputation by being polite and quiet at baffling situations.

If you’re bowled down with a negative impact and your reputation is under pressure. To repair your reputation you require doing your daily work and being productive each day.

You can take up breaks, and calm down, but never compromise on your work. Your reputation is ruined when you do not perform well in daily work routine.

When you get to work early it would develop good impression and also avoids pressure and set up that you require to do for the day.

When you reach office earlier before your boss, you would have ample time to plan for the day and make your day productive.

Also, never forget to take a walk and show others that you’re a go-getter and initiate an early start.

Bennington note states that no one watches who leave the office at late hours, but is difficult to miss an employee who reaches office first.

12. Being an optimistic person:

Your reputation is usually ruined at the work place because of poor communication. For the same reason it is important to stay positive and clarify things which you do not understand.

When you are exasperated, do not let others know your inner emotions. Winning situations by losing creditability with your colleagues can offer you short-run win, but a long lasting loss.

The very basic aspect one requires to do to repair their reputation is to list down the priorities. Since workplace is always chaotic no one plans and lists down priorities.

It is really important to stay focused on the tasks that are important and present you as a perfect employee. Bennington states that you require keeping a note on top five priorities and work as per it.

14. Care for other people around:

Always wear a smile and behave nice to other people around you. Be interested in other people’s work and what they think of.

When you take care of others, you’re always appreciated and this also adds to repair your reputation.

By this way people are drawn towards you and avoid talking bad about you. This way you can feel good about yourself and also win more friends, and your thoughts within them are reconsidered.

Feedback is an important aspect in repairing reputation. To know about the effect of your personal brand positively or negatively, impact of others on you is important. This can be well achieved by focusing on feedbacks from others.

Feedback openly shows the negative impact audiences have on you and so you can work on it to repair your reputation.

The most crucial fact about repairing reputation is to analyze negative impacts and address them in a positive way.

Even the most successful people make mistakes, and so finding out mistakes and working on them is important.

Instead if you just take the problem lightly, a move on your professional relationship would be corrupted and your reputation would be at risk further. So find the root cause and narrow down in the right way.

Gossiping stands to be the root cause for reputation to be damaged. A solution to repair your reputation is to avert gossiping or simply say very less or nothing amidst any gossips.

When you start elaborating gossips you will grab others attention and would be cornered.

Gossip will always do a lot and put you in trouble, so avoiding it can be the best solution.

Relationship and reputation are basic entities in business and both these should be maintained to a good score. Your reputation with each individual is important and so guarding the same is important.

To achieve entrepreneurial success a good reputation is mandatory. These tips mentioned above assists you in repairing reputation and thus you can gain confidence and support from boss and peers.