What is Scientific Management Theory?

The Scientific Management theory or concept is about the progress of science to substitute the approximation principal or hypothesis of the awareness and education of workers.

The main intention of scientific management theory is to enhance economic efficiency, specifically labor productivity. This theory considered one of the best and initial efforts where science applied to management and engineering of process.

Scientific management theory by Fredrick Taylor was a technique that was developed to enhance the efficiency of a work process. 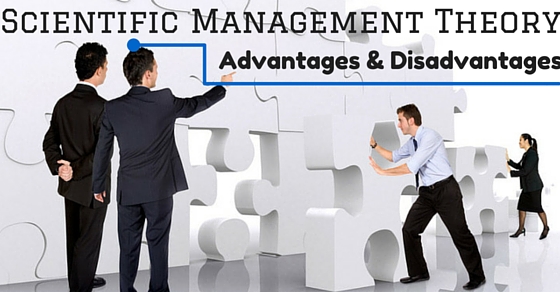 The theory centered on the systematic study of people, behavior, and tasks. The core of Taylor’s theory that they followed the technique of breaking the work process into sub-tasks or least possible units to regulate the most efficient method for accomplishing a particular task.

Though the scientific theory of management provided tools for workers to enhance their output and efficiency, employees did only menial work and hence the theory criticism of the classical theory of management faced critics for developing an assembly-line atmosphere. With this as a reason, the theory falls out of favor by various companies but still consider as a valuable tool in many companies for its principles.

Let us discuss the scientific management theory’s advantages or benefits.

The scientific management theory is responsible for enhanced production as it concentrates on steady improvements in business operations. There is fruitful cooperation between managers and workers and hence enhanced teamwork achieved. The harmonious relationship between the management and workers assists in production in the organization.

The best part of scientific management theorists is that the managers can have good control overproduction. Employees become specialists in their field as they do the same task repeatedly; this makes it easy for the manager to have control over employees.

Inaccuracy decreased as the theory based on experiment and observation for context-specific solutions. With better planning and improved decision making, the accuracy achieved.

The theory stimulates the management to adopt a positive relationship with leadership. Cooperation amongst employees and managers enhances democracy in the workplace. Hence there decreased autocracy by following scientific management theory.

The mechanization and the latest use of technology in the production of goods enhance productivity. Since there is enhanced large scale production, there is a decrease in per unit cost of production.

Planning ahead of time and prompt decision making are few good aspects of scientific management theory.

8. A benefit to customers:

With the help of scientific management theory, there are triple benefits for the consumers. Consumers pay fewer prices and can get the best quality products. They are also able to attain better living standards.

They follow early working methods and control where a management methodology developed for training, selecting and supervising them in a close manner. Since scientific selection and training methods follow, it leads to a workforce that is best and enhances efficiency.

Efficiency also increased with the standardization of techniques, tools, equipment, and materials. The workers also benefit with development and scientific training as they can enhance their competency and knowledge.

10. Best use of resources and development:

With the scientific techniques followed, there is better utilization of resources this, in turn, leads to increased productivity. Wastage and inefficiency of all means eradicated with the theory. Also with the help of scientific investigation, it leads to technological development. They also follow other quantitative techniques and modern studies are based.

11. Beneficial to the nation:

With the help of scientific management theory, there enhanced beneficial aspects for the nation. Some of them increase production and less cost of production, industrial harmony, and peace, every phase of society meet the high standard of living, the national income enhanced, and there is also quick industrial development with this theory. The role of Scientific management theory plays a crucial part in developing the nation.

Work in lesser time achieves with scientific management theory. The operations regarding productions pre-established and lead to fewer production delays.

With the assistance of this theory, work carried out regularly according to pre-determined plans. Complete guidance and instructions provided to workers to carry on with work as planned.

Large scale production and enhanced productivity leads to enhanced turnovers and more profit for investors. High profits can reap for self-financing so that the concern has a sound financial base.

Since there are a healthy relationship and cooperation between management and labors, hence they have a cordial and harmonious relationship with one another. In this way, industrial disputes reduce and peace in an industry achieved.

The mental revolution is a concept evolving by Taylor for the development of mutual trust, understanding, and confidence between management and labor.

The following mentioned are a few limitations or disadvantages of scientific management.

The theory requires an investment of huge capital and consider as a costly system. The establishment of work study, planning department, training of workers, and standardization requires more money.

The management takes complete responsibility related to the control and planning of workplace activities. Since the managers take up control of the employees, they lack creativity, another reason for this is that since they repeat the same task, their chore is meaningless, monotonous, and tedious which reduces employee motivation.

Though the capability to plan is an advantage, the downside of planning is that it makes work inflexible and rigid and may lead to carelessness and dissatisfaction. This directed to less productivity.

With the application of the scientific approach of management, the employees focused on how well they perform their job and their statistics and results produced along with a time frame. With this result, the employees may feel underestimated and also feel alienated which may direct them to absenteeism.

Over bureaucratic activity may be a major disadvantage in any organization. A bureaucratic and strict organization may make the employees feel dissatisfied and this may lead to high staff turnover rates and may affect productivity.

New staff must be trained to adapt to new changes in the sector which leads to wastage of productivity time.

The theory follows a specific approach for organizations and the employers gain control over the workers. This activity makes work mechanistic and treats workers like machines.

The theory focuses on efficiency, where workers viewed as robots to speed up work. The workers lose skill level and autonomy work level; they aren’t beneficial for state of the art working conditions.

7. Not suitable for teams:

Scientific management theory doesn’t work fruitful for teams and groups as they have the capability to abuse and exploit human beings which may lead to conflicts. There is no scope for individual preference with this theory.

By applying scientific management theory there is a separation of work such as in planning any function and executing them. Since management takes complete responsibility, there is a reduction in workers’ role in rigid and adherence procedures where the workers have no idea.

Since the scientific approach follows the piece work pay system, there is no chance for any realistic bargaining regarding the wage rates, as the tasks timed, measured and rated scientifically.

With the application of this theory, men replaced by machines which in turn lead to unemployment. In this way, fewer employees required and many chucked out from work.

The scientific management theory pushes workers to rush to complete their work and complete work within the stipulated time. In this way, there is an adverse effect on the health of the workers.

With managerial decisions, there is strictness and stress for managers as they need to take responsibility for having complete control over the workplace. In this way, there is pressure influenced in the workplace for the workers too.

Productivity and profitability give importance which leads to exploitation of employees and they associated in trade unions. This led to the mistrust amongst employees and management.

According to Frederick Winslow Taylor’s theory of motivation, employees do not naturally enjoy work and they require close observation and control. Taylor’s assumed that workers focus and motivated by employing financial gains. But the real truth is that the employees not motivated by finance aspects but by non-finance incentives such as social needs and more.

The scientific management theory is considered time-consuming as it requires complete reorganizing and mental revision of the organization. The theory when adopted needs more time for standardization, study, and specialization, or else at the time of overhauling, the workers suffer.

These are considered a few advantages and disadvantages of scientific management theory. Hence it is suggested to make a complete research about the theory and review if it would be suitable for the organization and later adopt it.

“The principles of scientific management” was published in 1911 by Frederick Winslow Taylor, where this theory was applied to the management of workers.

This theory was adopted mainly by many organizations to improve productivity.

To simplify jobs, tasks are optimized and the employees are trained to perform such tasks in the best way.

Scientific management theories have worked in many concerns and made them beneficial, though it had minimal disadvantages.

There are many sources that best explains the good aspects of the theory. The experimentation was followed for some years and was concluded with classical scientific approach principles, advantages, and disadvantages.