Job, office, the first thing, these two words remind us of is the Boss. The man of the house who controls, decide, plan and whole office coordinate with. Working in an office not only relates with the job, or the colleagues, but also the work environment, and your boss. 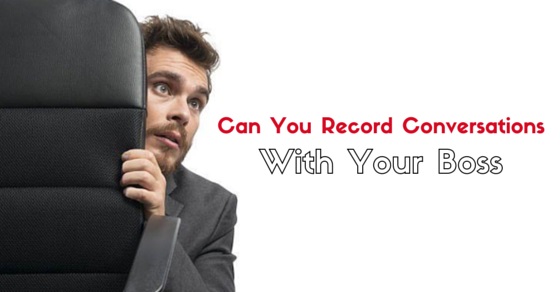 It has been seen that people have started acting smart and using different types of evidences to prove their right side. These evidences could be the documents or any video clip or an audio recording. Conversations with someone to be used as a proof are recorded by people.

This tool is being used by various employees in their office to record any conversation with their boss or manager/supervisor which they think could be further important. Recording conversation with your boss has become easy with the development of technology i.e. the mobile phones, small recorders etc.

Can I Record Conversations:

Recording conversation with your boss can be legal and illegal depending on the laws of your country. An employee records the conversation on different intentions like:

1. To have detailed information:

Employees record the conversations with the boss in a meeting or when he is telling some valuable information so that they don’t miss any single point. This helps them to have details of the meeting anytime of making bullets of the information.

It has been seen some boss are jerk and on this implies no legal restriction. Recording that conversation of your boss helps to show the truth with the proof in public. Although it’s no use in legal proceedings until it has some big charge with it.

4. Record of illegal or wrong:

If you are facing any wrongful activity or any illegal thing in your office or by your boss like discrimination, harassment etc you can record that conversation as strong proof against him.

Whether recording your conversation is right or wrong completely depends on your intentions. If your intentions were to record and blackmail the boss or to just manipulate the things or damage the work environment, in that case the recordings are wrong, and will be treated wrong.

Everything has a two side of a coin, if conversations can be used for good they can also be used for bad but it all works on the law of your country. There are laws in consent applicable on the recorded conversation. So your recording is legal or illegal, it all depends upon the laws prevailing in your country. For this issue you can consult legal adviser before acting.

Some of the laws prevailing in this context are:

There are 12 states where federal laws allow all party consent recordings. According to this law, All-Party involved in the conversation should agree to the recording. If even one party has not consented, then the recording will be termed as illegal.

The 12 states, Connecticut,California, Florida, Illinois, Michigan, Montana, Massachusetts, Maryland, Nevada, New Hampshire, Pennsylvania, and Washington follow this law. Also known as Two-party consent law, this law says that if you are recording a conversation with your boss your boss should know about it and have agreed to record.

In case, you just record without the other party consent it would accounted illegal and you may have to face problem. Even if there are more than 2 persons in the conversation, all of them must have consented for it.

Recording conversation in Public Places does not go for legalities. As the courts say, there is no “Privacy expectation” by the converser, so recording in public without consent or with consent would be termed legal. This law plays a very diplomatic role in court proceedings in case of recordings as Privacy is termed in private homes or conversations but not in Business places.

The party should have reasonable concern of privacy under this law for his side. But that also doesn’t make it to be used where law has other terms and conditions too. So it’s better to know about the laws of your country before going for recordings in your office.

If you are recording a conversation in concern with the discrimination or harassment on terms of (sex, caste, religion, nationality, age, disability etc), then you may or may not get the results you expect.

Depending on the laws of your country you may not be protected on the retaliation by your employer. It may happen that he may sue you for recording the conversation and you lose your job.

It’s must that before acting you must understand the law prevailing in your judiciary so that it becomes a proof against your employer not your job.

When you join job, do read the company manual. Now-a-days companies have started describing their consent regarding the conversation recordings and have warned the employees with the circumstances would happen if they are found guilty.

To be on a safer side you must check out for these conditions if prevailing your office so that you don’t put yourself in a problem in case company had already mentioned the rule related to it.

6. Are you being recorded?:

Do look out for this part of your company and see if your conversations through company telephones, mails etc are being recorded by the company. It has been seen companies recording employee’s conversations and if you do it so company have no words to say no.

If the reasonable expectation of privacy arises still the company cannot say that as it has been not considering the privacy of the employee. But this doesn’t apply to some companies like the BPO sector which need to record the calls they get. So be smart before acting.

Even if your boss or company has not written out any policy regarding recording conversation still it can prove it wrong saying that it “cause” the employee termination. So you must be very careful and have a strong reason of recording so that you do not face a termination. Its better either you have an consent of him, or a reasonable cause of recording than getting sued from your job and even losing the compensation or any type of employee refund.

With the advancement of technology, don’t forget that if you can record the words of other, your words can to be recorded. So it’s far better to say what is good than getting into a problem because of your own words. There is an old saying which goes right here, “If you don’t want people to find out about it, just don’t do it.” Laws prevail same for all. So same applies to you if your privacy is hindered by anyone.

Avoiding or ignoring or finding other solution for the reason is better option than getting into jail with high penalty. Be a smarter employee. Save your job than being out of the office for some reason and if you are going to leave office then no tension you can go for it.

P.s. If you prevail in all party consent country, and don’t want to lose your job, Start your recorder ask your boss if you can record the conversation and if he says No just turn it off, take out your notepad and pen and start writing.