In this competitive economic environment, a person losing a job can be considered as one of the bad things which can happen in one’s life. When a person decides to leave a job whether it is intentional or unintentional, it is something which matters and affect only the person who quit the job. Many of the people who just quit the job might have their own reason for their resignation, but sometimes the reasons are pretty obvious to everyone, one such reason can be constant comments from the mangers. 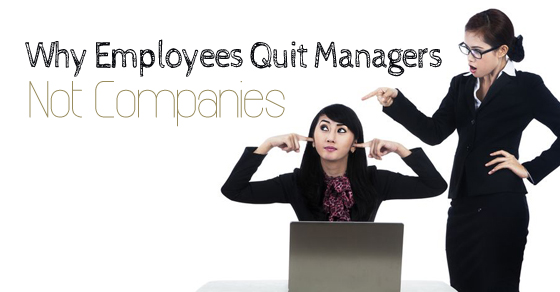 Most of the time employees quits from their job because of work load, salary issues, no performance appraisal and many more. But there are some of the recurring reasons that come along with the judgmental tone that the person might have quit the job because of his / her manager. Such kind of judgmental tone makes a clear difference of opinions of those employees.

2. Ignorance of contribution and efforts:

When an employee in the office tries to work accordingly to the duty assigned to him / her, he eventually involves himself / herself into the job and contributes some of the brilliant ideas for the project assigned to him / her. But the main problem which affects the employee the most is that the manager takes all the credit for the work delivered by the employee. And still the employee will not be praised for the efforts and contribution for their efforts on the project.

It is one of the common thing that happens in the working environment of the office and all the employees of most of the company are used to this kind of behavior of their managers. The behavior is that the employee works 24/7 in the office and perform their duties efficiently, but even after such kind of dedicated work, the employee won’t receive any kind of performance appraisal from the manager and this kind of behavior of the managers make the company lose their dedicated employees.

5. They disrespect their employees:

The managers of the company have one thing in their mind that the position that they are holding gives them power to treat their employees in any manner they want. And because of such thinking the managers deliver the least amount of respect for their employees. But the manager disrespects their work and them, all the time and this kind of behavior makes them decide to leave the company for their self-respect because every single employee should be treated respectfully while his / her working hours of the company.

6. They don’t respect their commitment:

Sometimes in the office it happens that if a group of employees worked on a project and one of the employees of the group have given more than hundred percentage for the project and was not rewarded for the work he / she delivered, but instead of that, the company rewarded or appreciated another employee who was a part of the team but not not the part of the effort of the team. Therefore, considering right employee who delivered the assigned duty perfectly can make the employee feel better about themselves.

8. They intentionally hold the growth of the employee:

Most of the mangers don’t allow their employee to achieve something which they deserve. For example, if an employee is worthy of receiving some sort of promotion, then there is a possibility that the manager might interfere in his / her promotion matters and holds his / her growth for some period of time. These kind of behavior of the managers lets their employees take the decision of leaving the company and this affects the company because the company lost their dedicated employees.

9. Managers fail to develop their skills:

Because of their constant interference in the matters of the employees, most of manager fails to develop their skills. And unfortunately they might get stuck with the office politics. This kind of office politics makes a person lose his / her ability to handle the assigned work and eventually, the manager starts blaming everything on the employees. Therefore, things may get intolerable for the employee and they just quit the job because of their managers.

A manager is a person who is responsible for the company’s work and he/she should monitor all the activities of the company. Most of the time a manager needs to be aware of all the activities of the company, but because of some unfortunate reason the company can suffer some kind of loss and at that time the company authority can question the manager for the reason for it. But instead of taking responsibility of his / her ignorance, the manager might directly blame it on his / her employee to be safe from any kind of the wrong action against him/her.

15. Builds personal difference between the employees:

There is some kind of managers who don’t value any kind of emotional feeling of their employees and just care about their growth and development. Most of the time the employees suffer because of such an unemotional act of the manager. Moreover, such kind of lack of emotional intelligence can lead the employee to make the decision of quitting the company.

As per Branham employee-exit surveys done on around 20,700 employees, he states that employers need to meet a few important needs that employees feel mandatory when working in a workplace. Here are a few Hidden Reasons why Employees Leave, they are

Characteristics of the Good Manager:

1. Providing all the relevant resources to the employees to perform assigned duties:

A manager needs to be responsible for the work he/she assigned to a particular employee. It is important that the manager should provide all the relevant resources to the employee so that they can perform better on the work which has been assigned to them.

Such kind of responsible behavior lets the employee maintain a healthy trust level on the manager which eventually builds a positive side of the working environment.

2. Communicating performance expectation in front of the team:

A manager should understand that it is necessary to discuss all the expectations which were expected from the work of the employee of the team. And to make that happens the manager needs to conduct some kind of meeting in front of the team and also should appreciate all the efforts of the team, especially those who had given more than their hundred percent for the work assigned to them. Therefore, these kinds of nature of behavior make a manager be called as a good manager.

3. Encouraging employees to grow and develop:

Most of the time a manager needs to be a person who can mentor the employee to grow better in their work. If the manager gets successful in such work then these kinds of positive support make the employee realize that he/she needs to perform better for the sake of the support he/she has received from his / her manager of the company.

Therefore, this kind of behavior of the manager provides confidence among the employees of the company. It maintains the dedicated employee to be loyal and committed to the company.

Now the bottom line is that the reason because of which the company loses its dedicated employees and hardworking employees is because the manager shows disrespect to the employees of the company. Therefore, if the authority of the company can recognize such kind of managers then it is advisable to replace such a manager who cannot hold on to the good characteristics of a manager.

However, all these above-mentioned information is to make things clear about the fact that the employee quits their job not because of their company, but actually because of their managers.