What is Scientific Management Theory?

The concept or theory of Scientific Management is about the progress of science to substitute the approximation principal or hypothesis of the awareness and education of workmen.

The father of the Scientific Management theory is Frederick Winslow Taylor, the Frederick Taylor scientific management concept formed in the latter half of the 19th century.

In his opinion, the industry requires competence rather than lenient incompetence.

Another name for Scientific Management by Taylor is Taylorism; and it was doable by the success of scientific research, measurement, and optimism. 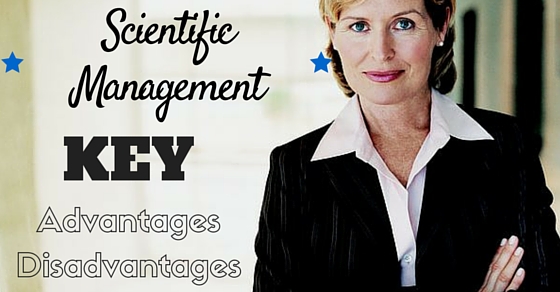 The basic benefits of Scientific Management found in Frederick Winslow Taylor’s 4 tenets on modernizing the labor force and its advancements.

The four positive points stated by Taylor in New England Railroad Club in1977 are;

The scientific Management approach guarantees financial gain as there increased efficiency reduced wastage and looses, also there is better homogeny and rules present.

It requires the total submission of all applicable and significant information about the difficulty before making the decision even after much research, observations and experiments.

1. Few facts about the advantages of Scientific Management:

2. Advantages of Scientific Management for the employees:

The proper scientific education and training of the workforce lead to increased labor efficiency, and proper logical and sensible managerial skills create cordial and peaceful relations between the labor force and the authority.

The employees also save from becoming confused and overwork as there is standardization and rules and regulations; about the machines, modus operandi and the workings of the labor force.

With the advent of Scientific Management has led to an immense reduction in the production cost of goods due to proper planning and mechanization.

3. Advantages of Scientific Management for the workers:

With the advent of Scientific Management, the employees had the chance of getting proper scientific education and training to enhance their working skills and efficiency.

There is also the formation of better and suitable working conditions and work timings with proper logical planning and research.

The workers should never exploit under any condition and the wages should be proportional to the work done, with higher pay for increased efficiency.

4. Advantages of Scientific Management towards society:

Scientific Management made it possible to sell good quality products at low prices. It also led to the proper complete utilization of resources without any unnecessary wastage and hence increased efficient productivity.

The living standard of the masses also improves as the finished goods brought at low, reduced prices.

Other detailed and precise advantages or benefits of Scientific Management are as follows:

5. Lessening of the Production Cost:

Also with Scientific Management, the latest technology brings down the production cost a lot.

In industrial production a huge quantity produced, so the per-unit production cost naturally diminished due to large-scale production.

6. A superior standard of goods:

With proper rules, regulations, and criterions of industrial production; and the helpful effectual leadership the quality of products produced is superior.

7. Advantages of the Division of Labour:

The notion of division of labor is a relatively modern concept and adopted for better production standards and higher yield.

Division of Labour is a tenet under the principle of specialization of Scientific Management and the gains are many.

Here the work or duty of all workers becomes simplified and perfectly detailed; which helps the workers to follow rules and perform better efficiently and economically.

8. Always try to avoid conflict and differences between Labour and Management:

Hence the discord and tensions between the labor class and the industrialist class reduced to a large extent by Scientific Management.

F.W Taylor invented the notion of ‘Mental Revolution’ which fostered deep comprehension, shared faith and conviction, and reliance and assurance between the workers and the authority.

The goal of Scientific Management increase and efficient production and also to look into the welfare of workers.

So the wages of the employees are better and appropriate. Taylor recommended a unique differential plan to reward efficient workers with incentives and promotions for better work.

Higher salary leads to better living standards for the workers.

10. Profits of the Industrialists or the Entrepreneurs:

The augmented production of goods and extensive production leads to great profits and higher turnovers for the financiers.

The greater portion of the profits can save for later use by the entrepreneurs for later self-support and improvisations of the production methods.

11. Appropriate processes of choosing and guidance for the workers:

A basic tenet of Scientific Management is the method of scientific or logical and rational selection, assignment and education of the industrial employees.

Thereby the appropriate candidates selected for the work most suited for them.

There is a provision of good working conditions. A healthy work environment ensures the efficiency of workers and thereby enhanced production.

The suitable and apt working setting has the provision of taking rest, enough lightning, proper airing, and safety measures followed rigorously and all other necessities which guarantee the safety and welfare of the workers.

The industries certify the optimum use of all the resources like raw materials, machinery, and devices, funds, and the workforce. The wastage of resources always scientifically removed from all spheres of industrial production.

The users or consumers make the highest gain from Scientific Management; as higher quality goods are provided at lesser prices.

14. Scientific Management is immensely useful to the Nation:

There are diverse positive characteristics of Scientific Management; from which the nation always profits.

Scientific Management brings about the industrial accord, production augmented to a large extent, and also better living standards provided to all types of people due to greater national income and swift industrial expansion.

Hence the notion of Scientific Management forming a stronger and better nation is true.

The demerits or limitations of Scientific Management are exploitation and mistreatment of information by the industrial owners or leaders.

As stated by Deming, W.E in operating a company; the financers always try to increase their profits to the highest extent possible; this is made possible by overworking the workforce and their utter exploitation.

He along with Taylor believes that if the ideology of Scientific Management accurately followed then productivity increases, the efficiency of workers in advanced and the quality of production is high.

But in the modern industrial world, there is an immense economic competition which causes inefficiency and stress in the workers; as extreme pressure put on the workers to compete with rival companies.

2. Exploitation and misuse of labor:

Taylor’s definition of Scientific Management gives immense emphasis on the workforce to perform to its highest capacity and efficiency.

The human factor of the employees was completely ignored with unnecessary emphasis on the profit motive of production.

This caused persistent exploitation and oppression of the workers which gave birth to trade unions; the trade unions protested against the wrongs of the authority which thereby created an atmosphere of enmity and tension between the employers and employees.

3. Crisis on the unity of instructions and directives:

In his theory of Scientific Management, Taylor applied functional foremanship; where the employees would have to confirm to eight managers.

This practice violates the notion of the unity of command; in which the employees only had to report to one manager.

The practice of functional foremanship creates misunderstandings in companies and industries.

Taylor produced a theory purely based on conjecture and the concept of utilitarianism; he gave a motorized and profit-driven outlook of the industries.

Too much significance was placed on the profit and efficiency factors but little thought was given to the workers as human beings.

The workers were treated as machines or robots whose only function was to produce goods continuously; so that the yield is high but the production costs remain low.

5. Difficulty in separating preparations from the performance:

Taylor always stated that preparations and arrangements are unique and a separate entity from the performance.

Thus the industries seldom have realistic rules and regulations, working goals and aims.

6. The outlook is distinctive and personal:

As immense highlighting is placed on individual performance and accomplishments; also little emphasis is given to team functioning and its achievements. It fosters relentless competition and disintegration within groups.

In reality, the accomplishments of a company depend on the whole group and not on a few individual hard-working and highly efficient employees.

He made the hypothesis without proper investigation and research that workers are solely enthused and influenced by the money motive.

This is not the real scenario; as workers are not only motivated by financial gains but also by social requirements and self-esteem.

Taylor’s theory had limited relevance; as most of the theory was a hypothesis.

Scientific Management can only apply in industries where the product can base only on the quantity and quality of production.

Also, Scientific Management cannot apply to the service sector as the performance of a worker can never evaluate quantitatively.

Scientific Management on a Whole:

Scientific Management Theory was invented by Frederick W. Taylor early on in the 20th century and this theory is of extreme significance since the scientific management method is followed by most modern age industries to maximize production and minimize cost.

Scientific Management tries to enhance the employees’ efficiency and the production of the goods of the industries by efficient and maximum utilization of all the resources.

The maximum utilization of resources is done through technical and logical, mechanized, and numerical scrutiny and inspection.