Beauty is a major factor that can help you get jobs quicker but beauty alone is not sufficient. Often we come across news and articles focuses on why beautiful women receive less at jobs, or how they inappropriately targeted by other employees.

While it is unsuitable to target superior females seem like a victim to conspiracies, few studies have also established how such women may sometimes be a reason for unrest at a workplace. 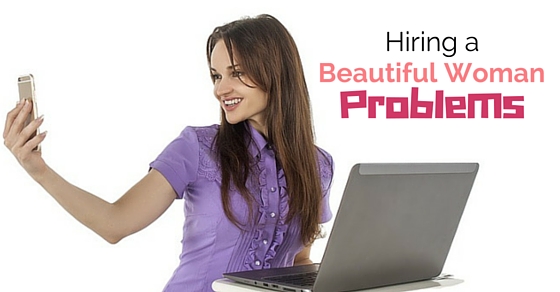 It is said that beauty can be deceiving at times, and during the hiring process for a profession, the human resource personnel have to counter some snobs, who think beauty can ‘do it all’. In short, beauty brings along with it several challenges that hiring personnel needs to counter to find the appropriate candidate.

Here we have listed out a few of the most common difficulties in hiring beautiful women. Read along and be better prepared to tackle the recruitment wisely.

Pains of Hiring only Beautiful People:

1. The expectation of a Higher Pay:

A woman who is beautiful and knows that she is attractive always expects to receive better. These are women who have always enjoyed more attention in their families as well as in their careers. That wee bit of extra attention at an early age makes beautiful damsels feel they always deserve extra even in places or professions where they lack the deserved skills.

Being charming must not incite an annoying behavior. But, this is what happens when some ‘lookers’ imagine that they can seek a higher pay than what their skills may call for. Very often interviewers carried away by the charms and beautiful women with fewer skills land up in jobs they do not deserve.

2. Live in a Bubble that Beauty is Brains:

Some are happy to believe that intelligence is not comparable to beauty. Such people are tricky to deal with at the workplace, especially during interviews, because they may be too boastful.

Today, everything depends on marketing and the sad part is, this rule applies even in the case of employees in job interviews. Some beautiful women understand the significance of marketing their looks and persona to get a job. They do this effectively and often manage to convince people who enchant that beauty is above brains and if you have good looks, you possess power.

Good looks do not cover up for a harsh nature. An organization works because of the different individuals and every individual in each rank has the same importance. Beautiful women often regard themselves as more important than people in lower positions.

They think that a designation defines the value of an employee and the power he possesses. This kind of sentiment is harmful to the smooth running of any organization.

Beautiful women are gentle and humble, but few are nothing less than sheer egoists who are selfish enough to think lesser about the job profile, but more about having their way at literally everything.

When you work in an organization, you cannot have everything your way. The greater good of the firm or the organization should always be the focus of the company has to grow.

Those melting looks can scare away colleagues who feel inferior when a beautiful person joins their team. Well, this is not a problem of the woman of course, but the employee.

However, this factor may play in the mind of the recruiter and influence his/her decision about employing the person. Recruiters are usually well aware of how his/her call can influence the team.

In every organization, work is done through a team effort. That is the reason why you most often come across questions like ‘Are you a team player?’ and ‘Do you get on well with your team?’. If hiring one beautiful woman causes conflicts, demotivation and lack of performance in a team, the recruiter will surely rethink before he comes to a final decision.

5. Hard Time Convincing that No Favoritism is Involved:

It becomes a task for the HR personnel to convince others that they are not favoring gorgeous women at the workplace, and it holds even during the hiring procedure. If the person is not skilled enough for work, she will not be given the designated position.

There are two sides to the same coin. If a beautiful woman hires for a certain position, there would be others who complain there has been a priority given to good looks.

On the other hand, if a beautiful woman is rejected because she does not suit the particular profile, she will complain that there has been discrimination because of her good looks. The HR people thus have to deal with a tough situation if a beautiful employee involved.

Job positions like a security guard, related to the management of a big project, or so-called ‘masculine’ tasks such as working at late hours in the night, at the police force, etc. may invite gender stereotypes, especially for attractive women.

The recruiting person may strictly avoid feeble and delicate women in all such professions. Hiring a beautiful woman may lead to problems with the rest of the professionals.

Elegant seeming females may not be too driven at cracking an interview, because they may speculate that looks are enough to cover up any significant follies or lack of knowledge. This is a wrong attitude and recruiters may find it hard to get the right answers out of such individuals.

Hiring such women may never help the company’s future goals. Since a company cannot waste its resources on such employees, it may get rejected in the interview round itself.

Here comes the spoiler, some stunning women are so intensely foolish that they convince about their beauty being better than actual work experience. They believe that good looks and a stunning persona rewarded more than years of hard work and experience.

This attitude prevents such women from working in a thoroughly professional environment. Their belief that they deserve more than what they are receiving makes them treat their coworkers badly.

This can ruin the office work environment. Beautiful women who belong to this school of faith are thus despised by recruiters. They do not take the risk of hiring such women in a good organization.

Being bold and confident are great aspects. However, overdoing it can be bad. This is often a trait in women with an appealing appearance. Such women accustomed to the attention of the people around her. They allowed to dominate and overpower others and this has altered the way they look at people.

They may consider it correct to act dominating all the time, extending to being rude and impolite with the interviewers. This may sometimes hamper their career prospects. In case such women get hired, the true loss is experienced by her teammates and colleagues who have to put up with really bad behavior.

These above-mentioned points reveal that there is more than one reason for recruiters to discriminate or avoid hiring beautiful women. All these points to the fact that beautiful women need to alter their attitude and be more professional if they wish to make it to their dream jobs without difficulty.

Here we have listed down a few tips that beautiful women may follow to improve their chances of getting a job:

Tips for Beautiful Women to get Job Easily:

If you possess the knowledge that requires in your field and the recruiters convinced that hiring you is going to benefit the company, you will surely get your dream job. Hence, read, learn and gain knowledge.

You must remember that recruiters have been in their field for several years and know the best candidate for the vacancy or open position. If they have rejected you or chosen someone else, understand he or she possesses some skills or abilities that you do not possess. Try to inculcate these skills rather than envying the chosen candidate. If you improve your skills and abilities, you will at least land up in the next best job.

3. Mingle With the Team:

No company can work if there is no team spirit. If you mingle with the team and everyone is comfortable working with you and finds you amiable then there are fewer chances of discrimination against you. So try to be a part of the team.