The dizzying speed with which new companies are being formed and the laissez-faire attitude that many of them have about employment issues raises concerns about potential liabilities. 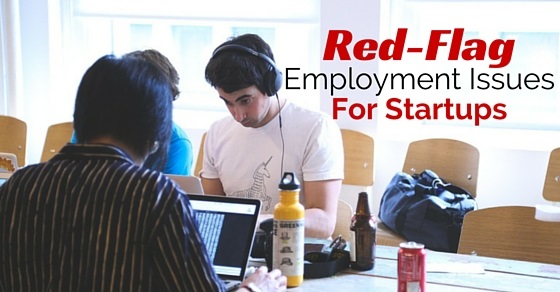 Some of these businesses soon may find themselves in litigation with their employees, particularly once the economic boom slows and workers discover employment violations.

“In the rush to get to market, many start-up companies overlook key employment laws, never dreaming that they may pose a threat to their business. However, they may be living with a false sense of security.”

In the standard 24-7 world where many start-up and emerging high tech companies operate, overtime could well turn out to be a major hidden liability.

This problem is especially prominent in development countries, where time worked over eight hours in one day usually requires time-and-a-half pay unless an employee is overtime exempt.

Under Federal law anything over 40 hours per week falls into overtime, which allows for greater flexibility in the work force.

Attempting to determine whether a worker is exempt from overtime can be quite complex, and employers should consult with professionals in making the assessment.

While Federal law provides an exemption for computer workers, it clearly differentiates between true computer programmers creating programs and those following instructions developed by others.

California is considering a similar exemption, but most state laws have none. So whether an employee is exempt or not is a tricky question requiring a well-researched answer.

“In today’s booming economy, where work is plentiful and salaries reflect the tight job market, overtime issues are not often raised by employees who are focused on getting to the IPO.”

But the statute of limitations on overtime is three years and, with new investor caution and companies cutting cut back on staff, we may well see the issue of overtime raised by many disgruntled former workers.

A company’s most valuable asset often is its intellectual property.

To protect these assets, it is important for employers to clearly define the elements of their business that they consider proprietary and confidential.

In addition, anti-competition clauses in employment contracts that prevent an employee from revealing company trade secrets when he or she takes a job with a competitor must be carefully crafted to maximize enforceability.

This demands knowledge and finesse, especially in states such as California, where strict laws limit companies in their ability to prevent the free movement of employees within an industry.

To avoid taking on the responsibilities and costs of a steady payroll, many young companies hire what all participants refer to as “independent contractors” for numerous functions such as Website development, code-writing and administration.

Employers pay these workers by invoice, thinking this makes them independent contractors.

Under the rules governing what constitutes an independent contractor, however, most of these workers are, in fact, employees. As such, the company may be found responsible for their withholding taxes, workers’ compensation and, in some cases, overtime pay.

The failure to properly characterize these employees can result in heavy fines, not to mention a potential lawsuit if, for instance, an individual is injured on the job without workers‘ compensation coverage.

Because many companies are put together piece-meal or with fits and starts, there is often no consistency in employee contracts.

This may create a management nightmare as the company grows, contracts expire and different incentives are introduced. It is important, therefore, to develop strong, clear, standardized contracts that allow customization when necessary.

While many young Internet and high-tech companies take pride in the fact that they operate in an unstructured environment, this can foster a dangerous disregard for the rules prohibiting practices such as sexual harassment, or gender, marital and other forms of discrimination at workplace.

“Although a passing comment such as ‘we would never hire a married person or someone with kids because we pull long hours’ may sound innocent enough, it can be interpreted as evidence of discrimination — with serious ramifications,”.

Two crucial steps in avoiding such lawsuits are to develop policies that clearly state the company will not tolerate harassment or discrimination and to set up procedures on how alleged violations would be addressed.

Author Bio: Zohaib Akhlaq is a Digital Media Specialist and Freelance writer. He is also the founder of HowEntrepreneur, a site dedicated to sharing advice on entrepreneurship and small business. You can follow him on Facebook, Twitter and Google+.