Unions cost a company, not just directly but even in many indirect manners. They have caused a slower work process in companies, reduced productivity and poor employee relations along with more adversity.

There are long-term contracts which can limit flexibility, strikes may cripple in a monopoly situation, and it limits technology, job security as a value will lessen necessary termination.

Let us get some insight as to what is the purpose of unions, why employees join them, why they are bad and the many disadvantages of unionized workplaces.

Below are segregated explanations as to why employers do not like unions. 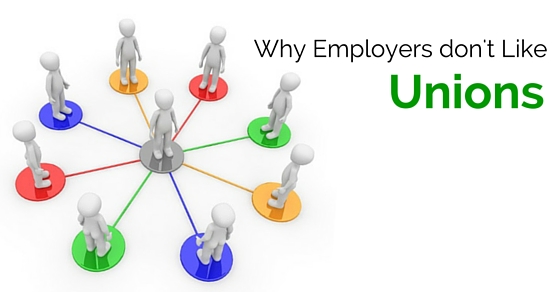 What is the Purpose of the Union?

Corporations are powerful and have control over almost everything.

Thus against such a supremacy, what can an individual do by himself?

It acts as a medium of communication among the workers and the management. Thus unions seek to protect such individual employees.

The company can get rid of an employee and replace that person. If the company is amoral then that company may search for an individual that will do the work at the cheapest rate.

If employees join a union, then they do not come as an individual but as group, which will help them to become powerful.

They can negotiate pay, terms and work conditions and if companies deny listening to them then together they can strike.

The unions were originally formed to protect the workers and their rights. The basic purpose of the union is to protect the rights of the employees and to ensure that matters such as salaries, working hours, and contracts are reserved at a fair level.

Companies are forced to abide by their wishes as the unions have the power to go on strike and completely bring down a company to get their way out.

Why Employees Join the Union?

Every employee has a necessity to have a sense of job security. They want to be sure that the management of their company will not be making unfair and uninformed decisions, concerning their employment.

So they look for unions, to guarantee that their jobs are protected from layoffs etc.

Employees work to earn for their livelihood. It becomes their bread and butter which is an important issue for their joining in the unions.

The employees think that the union, with the help of its united power, can guarantee fair salaries with equivalence to their other coworkers, medical facility benefits, pensions, vacations and holidays and paid sick leave.

A healthy and safe environment is an ideal place to work for employees. Even though there are legislative provisions for providing the employees with a safe work environment, they still believe it is more secure to know that the union is directly engaged in the safety and health concerns associated with them.

The unions have brought a democratic leadership style, in which the management have turned people-oriented, wherein the managers are expected to treat their workers fairly and respectfully. Employees can be disciplined for only specific and impartial cause.

If there is any case of mistreatment from the managers, the employee can file a written complaint against them.

It will be heard and by a formal grievance process with collective discussion by union and management representatives, will be resolved.

Individually an employee may feel powerless and unvoiced to cause changes that will be advantageous to them.

So there is a union that grants them with power and united voice which will help them to communicate to the management about their dissatisfaction and disappointments. It is based on the labour idea of ‘unity is strength’.

Man needs to belong in both his personal and work life. Keeping this idea in mind, the union provides a system for getting the people together.

This is not just to promote common job-related welfare but even to arrange programs and social events regularly to generate robust bond amongst the members of the union.

The employees will be able to participate in the management of matters that is affecting their interests and benefits by joining unions.

They will be able to influence the decisions which are the results of collective discussion among the union and the management.

The essential human drive is the desire for self-expression. We wish to share all our opinions, ideas and feelings. This goes the same for employees who wish that their management can listen to them.

Union provides a forum for them where they can place their feelings and opinions, even complaints and the collective voice of the union will be heard by the management and given careful consideration while the management settles upon various policies.

Reasons why Unions are Bad?

As the unions have accumulated power increasingly, they have helped the employees exploit their employers. The unions have the power to hinder the ability of a company to compete and flourish.

A company might be in intense trouble, yet the union might be reluctant to compromise in order to help the company endure.

The companies start to feel inflexible as they have union contracts to abide by. In the meantime, if a union manages to negotiate high salaries for employees of the company, it can cause the company to charge higher for its services, which will turn it less competitive against its rivals.

3. Declines the value of merit:

In many of the cases, the employees cannot progress much or at all on their merits.

However, they are to advance within the limits outlined in union contracts. Employers will have the trouble to filter out inefficient workers if they are belonging to unions.

The unionized employees will lose the incentive to go above and beyond for their employers.

The employees that excel and outshine others will lose their drive as go-getters due to lack of incentive. It will be worse for the employees if the union has hassled to not go the extra mile.

The main purpose of unions being developed is to provide justice and the rights of the employee. If the company management treats their employees in the right way, then there will be no need for any unions.

Employees joining the unions will also be having many other benefits. Unions are not easy to deal with. Usually, employers do not like unions as much as employees like. Unions behave as second in command in the organization and sometimes forces the employers to imply the decisions in their favour.

Here are a few reasons why most of the employers do not like unions,

It is one of the major disadvantages of employees unionizing. The rise in labour costs of unionized employees causes their non-unionized counterparts to earn less than what they do. It ultimately leads to higher production costs for the companies.

Another ugly disadvantage that employers have to face is employee strikes. If the employers do not acquiesce to the salaries, benefits or workplace policies requested by the union, the union workers can officially strike.

The central laws restrict an employer’s ability to fire a worker in strike. More than the loss of money due to lost production, there are other troubles too.

The publicity from a strike may lead to decreased sales due to the boycotting of the employers’ product or service by sympathetic customers.

The commercial customers, as well as vendors, may end their relations with this company, thinking that the employer may be not able to pay the bills or deliver their purchase.

Employers will not be able to promote an employee based on their merits or productivity with a unionized workforce.

Unions bargain workplace policies of promotions and secure workers based on seniority. In which if an employer wants to terminate a set of employees, they have to terminate the newly hired employees instead of inefficient senior workers.

The ability of an employer to discipline the employees who are poor performers also limits due to union rules.

With a unionized workforce, an employer is more likely to confront opposition to his actions regarding an employee’s status.

Although an individual employee may not be able to shell out the financial resources or will challenge things like termination, a lack of promotion, or alleged discrimination or harassment, a union employee can be supported to file a suit.

In case union members pay dues, these members can then appeal that those dues be removed from their paychecks. This adds an additional task for the company’s accounting department.

After the deduction of dues from the worker’s pay, the employer must next pay out the funds to the proper union account.

The majority makes the decision for the complete workforce in a unionized workplace. One has no voice if they disagree with the majority.

Union representations are able to give strength and power for change in support of a company’s employees. However, this powerful force impacts change in the path that the majority wants to go.

In a union structure, productivity is not encouraged or rewarded which reduces the capacity of a company to contest for business.

There are some countries where businesses have completely been affected adversely by the union workforce. At the same time, there are countries where unions work in an efficient manner for peace and harmony between employers and their employees.

But the adversities have caused the employers to dislike unions. The above explanations evidently clarify why employers are not in favor of unions.