Downsizing and Restructuring situations arises because a company or an organization is facing problems when it comes to efficiency and profitability.

The other situations that will cause downsizing or restructuring is when there is a merge, pressure from the competition, decrease in the hierarchy levels and/or the introduction of new and updated technologies that requires new hires; basically actions that puts the needs of the company on top of just profit.

Despite these common grounds between the two corporate actions, they are not the same and have significant differences between them; they can be differentiated in the following ways – 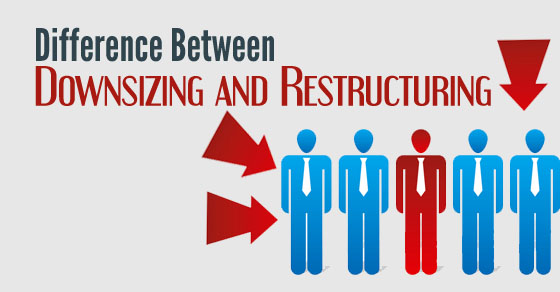 In the corporate world, downsizing is the action of permanently reducing the number of employees and/or divisions and department in the company in order to increase profit –

Also known as ‘trimming the fat’, it can also be achieved by redesigning the work profile from one employee to another or reordering and trimming the system that runs the organization, all this to improve profitability, efficiency, productivity and especially the competitive stance of the organization in the playing field.

In downsizing, just reducing the number of employees is not the only action taken, here are therefore the three types of downsizing –

1. Reduction of the number of employees:

The main target from reduction of the number of employees is the elimination of too many positions and head count that requires a lot of cost and time.

No matter what the result aimed from taking this step, it is usually one of those actions that negatively affects the employees directly and one that usually earns the company a bad reputation.

Hence employers are usually very meticulous and careful when this action has to be taken; Careful considerations and meetings usually takes a lot of discussions before they agree to a layoff.

Since reduction in the number of employees is a very unpopular choice, employers resorts to another type of downsizing where the type of work and the job profiles are being redesigned.

This is a strategy that involves evaluating the types of work or systems and processes and if they are actually important and needed; which ones can and should be eliminated.

Unnecessary work and system processes that takes up the time and the resources and apart from the redesigning workflow and hierarchies, this type of downsizing also involves merging of different positions and job profiles.

Yes, this is one type of downsizing, fairly unpopular but has provided answers and results for high inefficiency and low profitability.

This type includes major re-configuring of the organizational structure and looks, to changing the atmosphere and/or environment of the company.

This leads to a more focused attention on customer engagement when there is a downfall in the profits of a company and hence leading to more profits.

However this is not very effective when the problems faced by the company is full-blown and so is usually taken to action during the very early stage of financial difficulties.

Restructuring is the act of changing the whole organizational structure of the whole company.

A drastic modification that looks towards eliminating problems like debt, inefficiency and financial losses with the changes being focused on the legal rights, hierarchy, operation, system and the structure of an organization.

In order to become worthwhile again and better organized, the community of the corporate world chooses to take this step which has proven advantageous for the organization, even though the most likely endgame is selling the company for a profit.

Here are the 4 types of corporate restructuring –

The first step to any restructuring act is merging two or more businesses into one so that there is shared responsibilities, cost and resources in a single entrepreneurship.

Usually has a huge to very little effect on the market, mergers are a good strategy in getting the competition working together and thus ensuring a successful joint in profits and success.

This is a very effective step towards achieving product extension and geographical market extension into unrelated yet profitable industries.

Mergers are also divided into types where one is done through absorption and the other through consolidation of properties and ownership.

Another facet of restructuring is the acquisition step where a smaller firm is being acquired by a larger more profitable firm either in a hostile or a friendly takeover.

Most of these acquisitions stems from the loss in profits or a general fall from the competitive market; a bigger and more successful firm takes over the entire industry that helps dominating the playing field or just plain increase in the economic profits.

This action where there is a complete takeover in controlling the other company’s assets and ownership has, many times been a good step taken as this has proven results, advantages and eventually success.

As suggested by the title, this step involves an understanding between two or more enterprises to take on market ventures together for better results and economic profits.

This is a good way to share cost and risks, to get the advantage of more resources and size of market, expenses and of course, management.

The most important gain from this movement is acquiring new skills and expertise, benefits that are also complementary and new product development that more often has a big success probability.

This step involves the sale of a company’s assets in small or large parts and/or the sell out of a part of the company’s investment or undertakings for a small amount of profits.

These sold out assets or investments are usually the businesses that are not the core of the industry and evaluated to be good for elimination.

Strategic alliances and signed agreements where there is a shared or total sell out of a part of the organizational assets will help the parent company lose some of the fat that is not actually needed.

As noted above, downsizing is usually the result of a crisis that an organization faces like mergers, acquisitions, the change in the management of the company, an economic crisis, a change is the industrial strategy, excessive workforce, automation and/or cost reduction.

Here are four of the most common reasons for downsizing –

If the employee’s work is considered a liability then the most likely step to take is to reduce the cost that is involved by eliminating the need for that employee in the company.

Low production and inefficiency are the other two very common reasons behind cost reduction which has in turn loosened up the company’s heavy assets that most often are liabilities.

The other reason for this is that in this world of technological updates, a piece of machinery might be able to do the same kind of job than a handful of employees and thus increasing productivity with lesser amount of cost.

One of the main reasons for downsizing is an economic crisis where the need to cut a number of employees so that the crisis is averted; downsizing the company will also help in cost reduction and output is therefore balanced with the resources.

There are many reasons for restructuring a company and some of these are the changes in the business atmosphere, downsizing, updated methods of working, new management, technological changes, mergers and acquisitions, buy-outs, financial issues and legal problems.

Most often, companies are being moved and reorganized so that productivity increases and the control on the market scene is more diverse and profitable.

The following points are the most common reasons for the restructuring of an organization.

One of the reasons that cause a complete turn around of the organization is downsizing the whole company where there is a reduction in the number of employees and therefore repositioning of work, systems and productivity numbers and sales are needed.

New strategies usually follows downsizing at the helm and therefore, with the new strategies in place, there is a call for the restructuring of systems and organizations.

Newer ways of getting work done such as a change in the atmosphere of the workplace, when there are outsourced employees and even the upgradation to newer technologies would require a new structure and systems that is being built around the new methods.

New promotions that would eventually bring about a change in management is also another reason for new structures and organizational rules to be employed so that it envelops the new management working strategy.

These reorganizations of the industry is obviously followed by an intense restructuring of the merged and acquired company/companies that results of a larger resource structure, shared responsibilities, cost structure and/or organizational arrangements that needs some rethinking and rearranging.

With the new ownership that is in place and the probability of a larger market target or production values.

Difference Between Downsizing and Restructuring:

Despite the many similarities between these two corporate strategies when it comes to bringing about these changes in the industries and the organization; there is another important and very common aim in getting a result that will be profitable to the organization at the end of the steps that has been taken.

However, there are differences between these two important steps that many organizations have to undertake in order to cut their losses and ensure sustainability.

Restructuring is basically a way of reorganizing the whole structure and processes of the systems and work profile that helps the resources to be very efficient while downsizing also consists of the above steps however this usually starts with laying off of employees.

This is one of the biggest differences between the two where downsizing does not have a new ownership strategy as it’s end game, restructuring is especially one that involves merging and acquisitions that will sometimes end in the parent company having a new hierarchical head to everyone or especially the merged company.

Restructuring is also hierarchical reorganization and hence even if the restructuring does not include mergers and acquisitions, there is also a change of hands in the highest ranks of the hierarchy.

Downsizing usually is the best way that a company can take inorder to fight inefficiency and low productivity, while restructuring is the step taken when there is a real crisis that might actually lead to the downfall of a company like debts and low number for the products.

Between the two, the most likely for the company to get into a merger is restructuring, while downsizing is just the cost reduction by cutting down the number of employees.

There is a lot of common points between the two and they are actually interlinked where downsizing might also lead to the restructuring of the whole organization, though this might not lead to mergers and acquisitions, there will be a need to reorganize the work profile, systems or even management within the company.

Restructuring has downsizing as one of the reasons that leads to this strategic move; however there might be a merger or a change in the management and an ownership change with this step.