Due to today’s economic condition, many companies have to remove a fair number of employees due to financial problems. Naturally, this comes as a hard blow to the workers, who try their best to take the company to the top.

RIF process is an extreme step that does affect the lives of some people, yet this is a step that has to be taken when things get tough. Given here are some of the chief benefits of reduction in force which could help the company at a time when the only other option would be closing down. 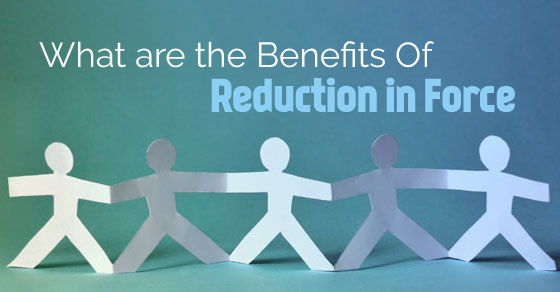 1. Limiting the number of employees to the bare minimum:

Reduction in the force is a step taken by many companies due to excessive expenses. Many times companies are unable to check their expenses and end up throwing away a lot of money, which could otherwise be put to some better use.

At such a time they have to call for a drastic measure such as the RIF. Companies make the mistake of investing money on those employees who they think will yield rich dividends in the future, yet when plans like this do no materialize then companies have to strip down the workforce to the bare minimum.

2. Holding on to those employees who are at the top of their game:

Fresh companies often start big, presenting ample opportunities for employees. Employees are offered big salaries and perks at their own expense. It is rather unfortunate that such a system cannot be maintained for long and pretty soon the company realizes that it is spending more money than it is making.

As it often says that desperate times call for desperate measures, so the company takes some tough decisions by narrowing down on who they should keep and who they should let go of. They usually hold on to those employees who are excellent at what they do.

3. Increasing the amount of work done by each employee:

Reducing your workforce is not an easy thing to do. Owing to the reduced workforce it is natural that the others who have been retained have to pull their socks up and even go on to take on more work.

At such a time everyone in the office is trying to get things back on track. Everyone is was well aware of the fact that if they do not pull their socks up and finish things, then pretty soon the company is going to shut down and they going to jobless. Having to work extra is a source of great stress to all concerned.

4. It could mean an overall change in the way things are done:

Since such a drastic step had to take in the company, it is obvious that things are not working out well and that the company has been making all the wrong decisions. At such a time if the executive board does not pull things together then the company will be nothing but a sinking ship.

Reduction in force could also be since the company has decided to change how it does things. Maybe they think that it is now time that they depend more on technology to do the work for them rather than relying on manpower.

The following mentioned are few best pointers that explain the true meaning of laying off employees.

1. It usually means a temporary suspension till things get better:

Layoffs or mass layoffs might not always mean permanent removal from a company. It can also imply a temporary suspension for a limited period. A temporary layoff may be in order due to several reasons, all of which mainly have to do with cost reduction and careful handling of funds.

Company layoffs mainly carry out to cope with the fall in the company’s funds due to poor investment or simply a dry spell. The employees normally ask to resume after the certain needed changes are made if the damage is not so much as to close the company down for good.

2. Eliminating ‘comforts’ which the company can no longer afford:

Some over-ambitious companies make the mistake of dividing the workload up so much that they end up producing positions that are redundant and needless. This leads to unforeseen financial draining of the company.

So to prevent this, when the problems arise, companies have to make maximum use of the layoff system to put an immediate stop to the unnecessary use of funds. No matter how well your company is doing now; you must know that things can take an unexpected turn at any point in time.

Downsizing also a proper explanation use by employers to free the company of all the employees that it can do without. Shunning the excess number of employees helps lower the unwanted loss of funds and risk of financial security so long as the company sees through its next best step.

Company downsizing may also mean eliminating posts that do not hold reason in benefiting the company. Layoffs are a step that no one likes to take but need to get the company back on its feet before things get out of hand.

4. The permanent termination of employment:

The worst and most unfortunate form of a layoff is the permanent termination which unfortunately calls the firing of the employees from work. The aim of this option is mainly to create a more compact group of workers who would yield better results.

With fewer people to deal with the management will able to hopefully more things happen at a lesser cost. This is the most radical way of making some changes yet, it is most effective in implementing new budget plans to make sure smart funding introduced. At such a time there is nothing the company can do rather than give its employees good recommendations.

Reduction in Force vs. Layoffs:

1. Layoffs give employees some expectation of being rehired:

As opposed to a reduction in force which gives the employees no hope of called back to work for the company. In a layoff, employees usually leave with that little ray of hope that chances are that they will be hired again in the future if things do improve for the company.

The heads of a company usually have an idea of whether they will be able to salvage things or not for the company and accordingly they should be very careful indeed about the things which they say to the employees when they are breaking the news to them.

2. A reduction in force is rather specific:

The term layoff, as opposed to the reduction in force, is rather ambiguous. As mentioned above a layoff could mean that the employee has a chance of bagging the job again. This to some extent does leave some questions and doubts in the mind of the worker.

Yet when it comes to reduction in force, things are rather specific and it usually implies the elimination of a particular job or the dissolution of a department which isn’t exactly profiting the company in any way at all. This is one reason why a reduction in force is at times much easier to carry out.

3. Yet both carry the possibility of some legal complications:

If you are an employee who does not have a contract then you are someone who can be fired at any point in time. One thing in common between both layoffs and the reduction of force is that there is nothing that the employees can do.

Carrying out of a reduction in force as well as layoffs is perfectly legal provided the reasons are concrete. Yet things could get a little complication when there is some preferential treatment gives to certain employees who do not deserve to keep on.

At such a trying time, companies should take all steps with caution to avoid legal trouble.

1. The performance of employees:

Before carrying out a RIF, a company has to take several things into account keeping in mind their future. One of these things is to make it a point to select the employees who have been performing well as opposed to those who have not.

They are to be given new positions in the company while the others are to be removed or laid off immediately. Basing the reduction on performance is a fair way of placing the judgment, as besides rewarding the deserving employees it also creates room for improvement in all those who suspended.

2. The aptitude of employees:

Another thing to look into before differentiating between your deserving employees and non-entities is their ability to handle a problematic situation.

This is not too hard to realize as in times of crisis employees automatically start to act upon their true nature. So those who can genuinely keep their calm and take decisions steadily in contrast to those who are ineffectual, remain in the company. When thinking about reducing your force, this is certainly a factor to keep in mind.

3. His or her attitude to work:

It is only when employees have a positive attitude towards work which has given to them, the company grows from strength to strength. Those who are pessimistic should fire immediately as they will never encourage others to reach for the stars.

4. Keep those employees who are willing to go the extra mile:

Given the circumstances, the company should choose to have those employees who will be willing to go that extra mile to ensure that things can improve.

When carrying out a reduction in force, a company should try and keep on those employees who have bright ideas and are willing to take matters into their own hands when things need to be done.

At such a time it’s only fair that the boss of a company comes clean and tells the employees exactly what is going on in the company. There is no point in hiding facts from those who have been working tirelessly towards the success of the company.

This has stated, the company should give its employees an adequate notice period telling them categorically that shortly, many of the employees are going to lose their jobs. This is the least that the company can do for the employees to ensure that they start looking for jobs at the earliest.

2. Keep emotions out of things:

One of the things which keep in mind when reducing your force is that the employers must keep their individual feelings and emotions completely divorced from what they are doing.

Surviving and remaining a relevant part of today’s business world is not an easy thing to do and that is why employers ought to stand by the decisions they take irrespective of how much pain they might be feeling.

Although it is a company’s primary concern to see to the welfare of its employees, sometimes due to lack of work or funds the company has to give up a few positions resulting in the mass expulsion of a large number of its employees.

This news indeed comes like a bolt out of the blue for the employees, yet it’s very much a part of life. If they are good workers, then they need not worry as any other company would be willing to hire them.