Choosing a career for only getting paid is easy as you have many options in the market today. But choosing a career in an organization that has a great reputation, a huge responsibility is something most needed to fuel your perfect job aspirations.

You need to ensure that you do the extensive research you need to be aware of the pros and cons regarding the position.

One such interesting job profile is a secretarial job. In this post, you will find some interesting advantages and disadvantages of being a company secretary. 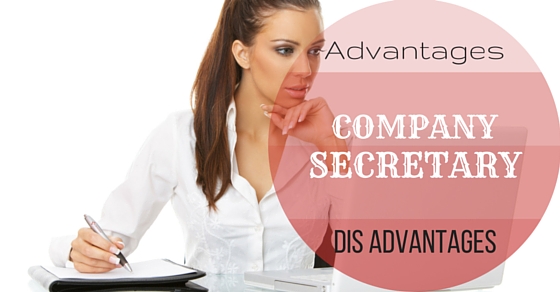 Who is a Company Secretary?

The role of a company secretary is to take care of the administrative functions and a whole lot of documentation work for the organization. The duties of a company secretary also include taking charge of maintenance of all electronic documents, all business-related office procedures as well as contractual agreements.

The demand for this job role is everlasting as it takes care of all the formal contracts and new agreements or scheduling various meetings and all administrative formalities of an organization.

There are various subcategories of secretarial work like educational, medical, cultural and legal, etc. Working hours of this job role is a bonus for the job seekers.

Though a secretary’s job is completely different from the receptionist both of them play as a front end of any company. Similar to the company secretary, there are several advantages to being a receptionist.

Things You Need to Know About the Career as a Company Secretary:

The main job of a company secretary is to maintain the company’s board on strategy formulation, conformity along with acting as an agent connecting between the company board and the stakeholders

Few of their job responsibilities are

The best way to define a company secretary’s job is a demanding job, grueling hours.

The basic qualification eligibility of a company secretariat is a basic degree of any stream from any recognized university.

Traits and Skills of Company Secretary:

Pros and Cons of Being a Secretary:

When it comes to the company secretary job, there is no stress of deadlines or meeting requirements. Even though this job role has important administrative work to be done, it has nothing to be done within the given time limit.

Facing a lot of stress in a job has become common in work life due to which we end up facing health problems or job dissatisfaction.

One can easily trust holding a secretary role as it does not have any kind of stress rather than managing their day to day office works assuring that things are going smoothly.

This is one big advantage of holding a secretary role of being stress-free most of the time.

When coming to working hours, the secretary job is a good option as it fits traditional working hours and also has flexible work timings.

Unreliable working hours are a huge concern for many of the job seekers which is a pain area for all the employees as everyone wants to achieve the work-life balance.

And it is a huge concern for people who need more time for personal life but at the same time want to thrive in their professional like also.

Secretary role is something which is very reliable in work timings and no overtime is required unless and until it is needed.

3. Great responsibility is given:

Any job seeker would be expecting a responsible job that has a good reputation in your environment. As the secretarial role is something that takes care of the overall functioning of the environment. It has lots of opportunities to take ownership of the position and perform tasks that help in the smooth functioning of the organization.

You will be in a position to decide the schedules of the higher officials, new agreements or contracts signed in your office or even to regulate new procedures of the office.

Hence, for people who love to take in charge of the environment can consider applying for a secretarial role in their career.

There is a wrong assumption that secretarial job involves lots of paperwork and documentation which involves huge hours of typing papers and long documents. But the reality is, now with the pace of technology, the secretarial job improve to a stage where it only deals with hardware and software data which store as electronic documents.

The working environment of secretarial roles has improved a lot and they are connected by local area networks giving them access to all the relevant organizational documents. Workstations have been operated with recent technological advancements where all the paperwork is fed in the computers as data and operated electronically.

Job satisfaction is very important for any kind of job. When it comes to the secretarial job you need to have good decision making skills which are very essential. And this job role will have a more authoritative position that gives you space and opportunities to implement your ideas and put your opinions across the higher management.

This job comes with the perk of meeting and interacting with the higher management quite early in your career. Hence it gives good job satisfaction and recognition in the work environment.

Interacting with higher officials is one of the advantages of being a secretary. This, in turn, will increase the respect among the other colleagues and adds value to your reputation. You can learn ample about the industry while interacting with the management which can help you to grow with the company.

There are various levels of secretarial jobs and the secretary roles and responsibilities vary accordingly, for example, executive secretaries have a major role to play with the chief operating officers and have lots of added responsibilities. And hence, mobility with the higher officials is an added advantage to the job role.

There is a wrong idea or a notion that people who have crossed their 50’s are not fit to work in a competitive environment and lose their edge in the market. But it is certainly not in the case of a secretary position.

A person with very good job experience and good decision-making skills, attitude, and a positive team player still have a good opportunity for becoming a secretary.

According to a recent survey, conducted by the Bureau of labor statistics, retired people joining a job as secretary has been increased to a good level, considering previous years. Hence, this job role is apt for all age categories.

Disadvantages or Demerits of Company Secretary:

There are a few disadvantages which have put forward for not coming forward for a secretary’s job. Few among them are salary, not a good image, women’s work, no scope of improvement, etc. It has been explained in detail below.

1. Payscale is not up to the mark:

The most common disadvantage that you can hear from everyone about the secretary job is the pay scale. Even though there are a lot of hikes or moving to higher positions it does not have a very good salary package compared to other jobs. There is a constant improvement in the pay scale but not as compared to other desk jobs.

You need to prove yourself and create a niche so that your efforts recognized and you create that importance in the organization. This considered one major disadvantage of choosing a secretary’s job.

2. Belongs only to women:

As it is a 9 – 5 routine job or a traditional desk job, it considers only for women. There is also a notion that it is a very routine kind of a job and there is no variety in the tasks that one performs and hence the job becomes boring at one point in time.

Hence, this job has accepted that it belongs only to women employees which restrict male job seekers to avoid this job. And with the routine that set for most of the time, it does give you a boring feeling to it.

Secretary Job exists for a good time and it dramatized as female employees misused or mishandled during the job as it requires to stay 24/7 with the higher officials.

You might end up with a lot of traveling with the senior officials to various places which indeed adds on to the image problem that many faces in this line of work. This poor image has made job seekers restricting from applying to this job role.

Career growth a very important aspect consider for all kinds of jobs. And people have an assumption that this job has a routine work of only dealing with paperwork and documentation process and does not have any scope of improvement in the career aspect. There is nowhere to go from being a secretary and hence nothing to look forward to in terms of promotion.

People always compare secretary job roles with a stenograph role which involves only typing a huge number of documents the whole day and has no scope of development as it has only documentation work.

And it also has a notion that this job role involves only paperwork and typing newsletters for the organization. Because of the typing job many have wrong notions about the job. This has stopped many people from accepting a secretary’s job role.

6. No scope as technology has taken over it:

With the recent advent of technology, many of the job roles have taken over by technological inventions. And certainly, many of the processes have been automated to ensure that there is no manual error.

For example, scheduling a meeting can also automate using any software, data can store in software application and licensing agreements are fed in the system directly which shrinks the job role of secretary.

The importance of the secretary reduced to just feeding the data in the system and let the system take over from there.

There might be few changes in the role and this cannot remove the job of secretary completely. All job has its advantages as well as disadvantages, it is the job seeker who has to develop their skill set in the job role in-spite of the difficulties. There will always be demand for the secretary role along with technological growth.