The act of firing someone is never easy at all, however sometimes if things are just not working out there is nothing that can be done and within the period of 90 day probationary period you will be forced to give that person the boot. 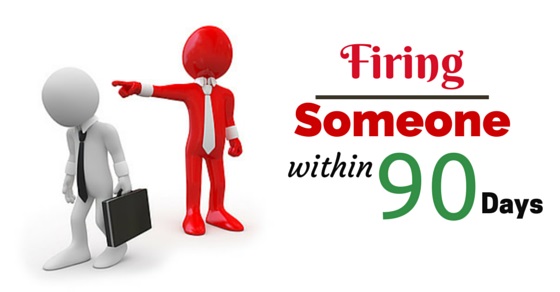 If you have the responsibility of doing the firing then you should not feel bad about it, just tell that person the truth about what the matter is and the ways in which he or she can improve himself because at the end of the day its nothing personal.

When can you Fire Someone within 90 Day Probationary Period?

It is of paramount importance that companies hire people who are right for the job so that they can carry out all the responsibilities that they are expected to without making any sort of mistakes, because even the smallest of mistakes can come at a heavy price not just in terms of money but in terms of the reputation of the brand. Sometimes the person hired, no matter how eager or nice to talk, he may just not be suited or capable enough to do the job.

In life you might come across many able people that are so egoistic that they will absolutely refuse to take instructions from others, they assume that their way is always the best even if it is not! Working with such people could turn out to be disastrous and big companies like instructions to be followed to perfection rather than having people chalking out a plan for themselves. Though following your heart is good, sometimes it is best to follow the time-tested methodology.

Within a short period of ninety days companies are forced to let those who are unable to separate their personal and private life go, owing to the fact that they prefer to have people working with them who have a steady work life balance. Unless it is some sort of emergency at home they prefer to have their employees to give their one hundred percent during work hours rather than being preoccupied with domestic issues. This includes not taking personal calls at work.

4. For not knowing how to conduct him or herself in a corporate environment:

When working for a fortune 500 company it is of paramount importance to ensure that you know how to conduct yourself at the work place. With a short span of under ninety days companies are instantly able to separate those who know how to present themselves and those who are unable to. Companies do not like to be associated with employees that come to work looking haphazard as well as unkempt as this reflects badly on the company name.

5. Does not adhere to the general office rules:

Most offices have fixed rules that all employees must adhere to under all circumstances. Companies do not hesitate to give the boot to those who are frequent defaulters even if has only been ninety days since the newcomers arrived. Ensure that the newcomer you hired tries even harder to adhere to office rules like coming on time or keeping a clear desk otherwise firing him or her will be inevitable within ninety days.

6. For getting over whelmed in stressful situations:

In a corporate world it is of paramount importance that employees keep a cool head and not stress out when things become tough. If you as the senior notice that the person often cracks under pressure then you should tell the person concerned that he or she is not cut out to be a part of the cut throat business world where dealing with stressful situations is a daily thing. People that are able to keep their cool and think on their feet are the kind of people that all companies are looking to hire.

7. Persons ideals are not in keeping with those of the company:

Needless to say, that we all have ideals and beliefs which we believe in and if the company’s policies are diametrically opposite to our own, then often we might find ourselves in complex situations which we are unable to deal with. One chief reason why you might have to fire an employee in less than ninety days is because you may notice that that person is in a constant conflict having to choose between his own beliefs and those of the company.

8. For having no proper work ethic:

9. For being unable to work in a team:

Being able to work independently is good; however it takes additional skill to be able to work in a team. Some people have a lot of fun working in teams as the work is divided, but others find it extremely difficult and even stressful. In big companies, the Board of Directors need to be able to have their employees working as a team so that they can together come up with brilliant ideas, however if a new comer is unable to work in harmony with others there is nothing to do but fire him or her.

10. For always making up excuses for incomplete work:

Under certain situation it is forgivable when employees do not give up work on time however if this is a usual occurrence then it is something that companies do not take lightly at all. Rather than spending time making excuses he or she should make sure to get the work done on time so that the seniors as well as bosses are happy. If not then that does not leave you much of an option.

11. For not adhering to deadlines:

Not adhere to deadlines is practically a mortal sin in any company. When employees do not adhere to deadlines then they silently communicate to the seniors that they are unconcerned individuals that do not take their jobs seriously. Then why should a company waste its time on a worthless employee like that?

12. For not respecting any professional boundaries:

When working in an office it is important to know how to give respect as well as earn respect. If you come across someone that has been acting in a questionable way and not behaving in an appropriate manner then you know that it is certainly time to let him or her go as chances are this person is not serious about the job and is likely to drag the company name into the mud. Start off with a warning but firing the person will be a permanent solution to the problem.

13. Goes along with the crowd:

Persons that respect seniors and listen to instructions are good however people that are able to speak their mind and give honest opinions are always much more valuable to the office. If you come across people like this then they are certainly keepers.

As opposed to this people that shy away from giving their opinion and prefer to sit on the fence are those that should be encouraged to put forth their view and if not they should not be kept on, as they can’t help take the company forward.

Fast learners are indeed assets to the company that anyone would not mind hiring however if you come across a new employee who is just unable to pick up any task correctly then you should not waste your precious time trying to train him, instead give him your honest opinion and tell him that his skills might lie in some other place, rather than in this particular office.

15. Having a number of degrees but no skill:

Being highly qualified is no guarantee that a person is going to be good at a particular job. At an office, someone that might not be having many degrees or shining academic records might be very good with his hands and might be able to put theoretical knowledge into practice as opposed to those book smart ones which are baffled when it comes to using their mugged up knowledge in the real world.

These are some of the chief reasons for firing an employee within ninety days. A period of more or less ninety days is enough to tell you whether or not you would like that person to be a part of the company.

Sometimes even if you have had the best screening as well as hiring process, things just do not work out and the person is unable to carry out the responsibilities as per your expectations and those of the company.