For your company to run in an effective manner it is very important that you hire people on board who are very skilled. If you hire people who are incompetent then they will never be able to do their respective jobs efficiently.

It is obvious that being hard working is a very good thing, however being a workaholic is something which is very bad indeed. No matter how well you want to do on the professional front and how successful you would like to become, you should ensure that you do not burn yourself out.

Given here are some of the chief differences that exist between workaholics and hard workers (high performers). 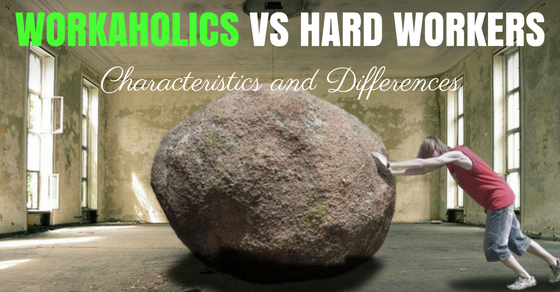 High performers are individuals who prove to be a great asset to the company. Being a high performer is not easy as it requires you to constantly work hard under all circumstances.

All high performers are very goal oriented and they have a very positive attitude towards their work. Such individuals never make the mistake of biting off more than they can chew and they never fail to make a positive impression in the minds of the other people working in the company.

Companies are constantly eager to hire high performers as they know that such individuals are very valuable and are sure to take the company to new heights.

1. They are very productive workers:

High performers are productive workers who manage to get a great deal of work done in a limited amount of time. This is owing to the fact that they are able to manage their time very well and they never focus on things which are unimportant.

2. They do not waste time in the office:

It is rather unfortunate that there are various workers in different companies who do not take their job seriously. They spend a lot of their work hours, laughing and joking with their colleagues.

As a result of this they are forced to take some of their pending work home. As opposed to this, high performers are well aware of how important it is to use time wisely.

They are organized individuals who make a plan for themselves and ensure that they follow it. You will never catch a high performer, wasting time by taking personal phone calls at work or indulging in petty office gossip.

3. They know when they need to say no:

A major characteristic of high performers is that they know when they need to say NO. Such individuals are well aware of the fact that they should not attempt to bite of more than they can chew.

If you too would like to be a high performer then you should ensure that you pluck up the courage to say no, to someone when they are trying to over burden you with work. If you take on too much, you will be unable to focus on the task at hand. So as far as possible, deal with one task at a time and get it over with.

4. They are always willing to learn new things from the seniors:

High performers are those that are not afraid of admitting when they are unsure of how something is done. They rather voice their question at the onset rather than do the entire task wrong.

5. They are constantly looking to improve:

One of the best characteristics of a high performer is that he or she is constantly looking to improve. Such individuals are never content with merely a few accomplishments; they constantly work harder and harder with every project which is entrusted to their care.

It is important to remember that no matter how old you turn, there is always scope for growth and learning. High performers are always trying to learn as much as they can.

6. They are consistent in delivering good work:

Consistency is something which is a chief characteristic of high performers. They work considerably over a period of time. What drives them is their passion to do well and the sheer love they have for their job.

Because they love their job so much it fails to be like a burden to them, on the contrary they look forward to coming to work every day and taking up each assignment like a challenge to them. Having such positivity in the workplace is a boon indeed and it really impresses the seniors in the work place.

7. They are always willing to go that extra mile:

On the contrary a high performer is someone who is always willing to go beyond the set boundaries and do things which are beyond his job description. It is this spirit which gets him noticed and it is for this reason that such individuals are the ones who usually receive promotions in the work place.

Society often encourages all of us to work very hard. From a very young age we are told that if we fail to work hard, then we will never be able to make a mark in our lives. It is for this reason that many individuals get a wrong understanding of hard work.

Workaholics are individuals who go to the extreme, in the sense that they do not know when it is the right time to turn off the computer and head home. They are addicted to their work and this addiction is not like dedication, rather on the contrary it is something which is most negative.

1. They are always very irritable and angry:

A chief way to identify workaholics is such people are bound to be very hot headed and irritable. No matter how much they work, they feel that their work load just does not decrease.

It is for this reason that people find it hard to approach them and even hold a proper conversation with them. Having such people in the work place is most certainly not a good thing as it leads others to constantly worry and be afraid of such people.

If you think that you are becoming a workaholic, you should try your level best to change your ways, yet you will suffer in time to come.

2. They never take breaks of any kind:

A workaholic has a very bad working style and will never take a break. They won’t take breaks in the course of the day and in addition to that after say a period of six months of continuous work as well they do not go on a vacation.

As a result of this, their family members hardly ever get to see them. Working hard is good, yet burdening yourself to such an extent is something which is terrible for both the mind and the body. Being a workaholic for a prolonged period of time is bound to take a severe toll on you.

3. Even when at home, they stress out about work:

Workaholics suffer from a great deal of anxiety. Even when they are at home, they cannot focus on domestic issues or things. On the contrary they are constantly worried about matters of the office.

It is for this reason that very often such workaholics end up living along because they are unable to find a partner in life who will be able to live in such a manner. A workaholic is usually first to come into the office and the last one to leave. Though they stay in the office for such long hours, their minds simply cannot deal with the stress.

Workaholics are individuals who compulsively take on more and more work and simply cannot divorce themselves from their professional obligations. In order to live a healthy and distress free lifestyle, individuals must be able to separate their private as well as personal lives.

However such individuals are unable to differentiate between the two. Their private life is practically nonexistent. It is for this reason that later on in their lives workaholics realize that they may have achieved so much on the professional front but their family life is absolutely in the dumps. They usually regret having lived their lives in such a manner with only money but no memories.

1. High performers are very happy and determined, workaholics are tense:

A workaholic might have a wrong impression of himself and that since he is working so much, he is a huge asset to the company, but this is not so, Such individuals are very toxic indeed.

2. High performers have a work life balance, workaholics do not:

A subtle difference between workaholics and high performers is that high performers are individuals who maintain a proper work life balance. Such people have a great deal of self knowledge and they know their limits.

On the contrary workaholics are individuals who never stop for a while to get to know themselves better, they just work and work without taking a break. Such an individual will not even stop in the afternoon to grab a snack or have lunch in-between work hours.

Maintaining a healthy work life balance is something which is very important indeed. No matter how ambitious you are, you should never ignore your personal and family needs, lest you will regret it later.

An unfortunate difference between workaholics and high performers is that workaholics are individuals who are very unhealthy. Such individuals are not only stressed out, but as a result of over working themselves to such an extent their body suffers a great deal. They suffer from ailments such as heart disease, high blood pressure or even frequent headaches.

As a result of being in front of the computer for such long hours, their eye sight even suffers a great deal. On the contrary, high performers value themselves and they never test their limits too much.

Various individuals have various thresholds. Some people can work for long hours without feeling anything, whereas on the other end of the spectrum there are other individuals who constantly need to take breaks, otherwise they are unable to concentrate.

If you wish to make it big in the business world, it is mandatory that first and foremost you recognize exactly what kind of worker you are.

If you are lacking in self awareness then you will never be able to reach your full potential. Irrespective of what others might tell you, you are capable of, you should try to follow your own mind and heart as far as possible.