Right to work laws happens to be a very interesting state which adds up to around 24 different states in a book.

In general, all of them can regulate the right for all employees to have the choice of whether they want to join a working union or don’t want to, at all.

What is Right to Work?

The right to work is a notion that states that people possess a basic right of doing any job, pursue a career or work or indulge in any productive employment and doing this cannot be prevented in any way.

One of the benefits of the right to work laws will also give their employees the option to choose in case joining a union is helpful to them.

There are also course arguments against for the laws of right to work and regardless of whichever side of the debate you take, knowing the whole fact is what counts. 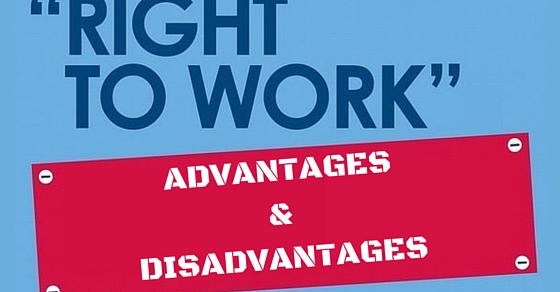 Even governments nowadays are taking upright to work very seriously. These laws are defended by few whereas some are happy to accept it. Here the unions are the ones who are not willing to accept these laws.

Though there lie some truths behind it, it is best to clear out the myths which most people have about these laws.

Fact: Union dues are made optional

Myth: Does not give importance to unions.

Fact: Helps unions to work to get the support of workers’

Myth: No economic benefits are provided.

Fact: These laws are taken seriously when planning where to locate

Fact: Wages are the same or higher in places that support these laws.

Advantages and Disadvantages of Right to Work:

Advantages or Pros of Right to Work:

1. You can pick whether you want to be a part of a union:

Those who support the law do assert that most employees must be given the right to pick and see what is good for them and if they want to become part of union members.

The right to work will make that possible. Stating that the law mandates all of its employees for not joining labor unions has been misconstrued.

What you should do instead is give these workers the freedom to act the way they want and allow them to entice employees to become a member.

For most of the proponents, it is far better than pressurizing people to keep joining against the will.

This is also a good way to make sure that labor unions may be able to negotiate way better with their employers when it comes to certain working conditions, better working wages and a sense of equality inside the workplace. It keeps the organization going as well.

2. It will lower the school taxes:

Secondly, it is pretty good when it comes to lowering school taxes. They will always maintain such laws so that the citizens of the country are happy and satisfied.

Overall the law of the right to work has significantly lowered school taxes in the past few years. It has also proved to be beneficial for everyone.

And since all of these taxes have been taken away from taxes of property, the ones who own houses shall be expected to pay much lesser taxes which is not the case with people who are living in those states that don’t have RTW at all.

Those who agree with the right to work say that teacher’s unions are more responsible for the educational costs and their increase.

One wonderful benefit that comes with a right to work is that it reduces the chances of unions to check all of their employees and also coerce them to join.

But the truth is that unions are usually businesses that make a lot of money. Often collecting dues from their members can be way too much.

Moreover being members, all of these members are not able to negotiate, cannot let any other labor union show any sign of support. This may also cause the union of monopolies.

The right to work will always guarantee that this won’t be happening. By using such a law, employees shall use their rights and become voluntary as members will quit in case they are not happy with how all of it works.

In that way, there shall be plenty of pro employees in the unions providing services!

Most advocated for RTW have said that most unions will monopolize such sectors in most of their unions which do affect the industry sectors as well.

Also being a section of the dues that were collected from their members are handed over to political leaders for things like promotion and endorsements and instead of that, they give support to such unions and not always the members who are benefiting from them.

In those states which practice the right to work facts, such occurrence shall be reduced since most employees shall not ever be forced to pay their dues that they don’t usually consent to.

Less of those union members means that lesser dues are collected. Towards the end, the leaders also have a good reason and favor certain unions so that they can make more election cash.

One of the biggest benefits of the right to work is that the states will give you good pay scales.

While they could need to pay union dues, they must also be available for much greater access to health insurance and this, of course, must be provided for an affordable act.

The employees have trained routinely in states which do not have the right to work.

Overall the employees have excellent personal wealth which also boosts the economic standards of the workplace.

This gist here is that unions will also help employees to band together and also fight for much better working conditions.

They have better pay, better benefits as well as providing services which would in other ways not be accessible, for example, job placement and legal assistance.

The right to work also offers you several benefits and psychological benefits that make the employees better.

They also offer fair wages that are competitive. The unions may also offer employee protection against unfair firing and insurance coverage for all of their families.

Apart from that, you also get a bonus which can organize strikes that will move employees towards making even better deals for employees.

Disadvantages or Cons of Right to Work:

1. Forces to take away money:

When you force someone to be a part of a union and have the dues taken out regularly, you are not giving them the right to pick.

This is also in addition to the fact that most unions will represent a certain ideology that will show that employees do not always agree with the fact that an employee might not wish to be a part of a certain union.

The whole concept of these unions helps their employees to get a good deal and also avoid exploited by their employers.

If the union is worth their cash, they will also be able to put into them by the employees then there shall be no reason for employees to not show the interest in joining.

In case the employee disagrees with the action or even stance, the union will take on a particular matter.

2. Could lead to a few turnouts of the union:

Critics have also opposed these laws since they affect the memberships of the union. They mention that unions exist for negotiating on behalf of American people who terminated unlawfully or maybe be expects to deal with bad conditions etc.

They must also agree to accept lower wages so that they can keep working. If the union members are voluntary, there is a chance a union might not exist in several industries after all of this.

Opponents have always argued that in case this happens, the employees shall have no negotiators and representation.

They may not ask for more hygienic working conditions and better wages which will contribute towards poverty in their community.

3. It will allow nonmembers to have benefits for free:

People who are opposed to the RTW law are usually not very happy with the idea that employees who haven’t been paying their dues enjoy the same kind of right to work benefits that most union members get.

Unions are also those who are working and negotiating for higher salaries, expanded benefits and even better working conditions.

With such existence of the right to work, these labor organizations which have over time fought for the right of employees may be dismantled and such an occurrence may result in such lower wages having lesser benefits.

4. End of such union states have resulted in very little health care:

Having the anti right to work groups has spoken about the effect of RTW states that are always increasing about healthcare.

With even more employees, not wanting to be members of such unions, most of them will pick to be on their own.

Unions have always been instrumental in pushing them for even a proper health care plan for people, who are working along with better wages and bigger benefits.

The fact is that RTW will state that lesser wages have pieces of evidence that it isn’t always going to be helpful to most people.

This brings the post to an end. If you have enjoyed reading the article and have some feedback to give us, do let us know in the comment box below. We would love to hear from you.

The pros and cons of right to work overall is a very effective concept that can change the whole world. It can help in bringing about changes and are helpful as well.

The article is beneficial for its readers and we hope you have found some benefit as well. You can let us know some of your questions and queries by commenting on the box below. We would love to hear.