In ancient China, philosopher and poet Lao Tzu propagated that our words become actions which eventually shape our destiny. Similarly, in Greece, historian and essayist Plutarch stated that a speaker’s character, state of mind and disposition are exposed through his speech.

No matter how you define your success, your words will help in clearing the vision into reality. There are quite a few words which can cause considerable damage to your reputation and self-belief. It can eventually threaten your success. However, sometimes you may fail to comprehend as to why people take some of your words in a negative manner. 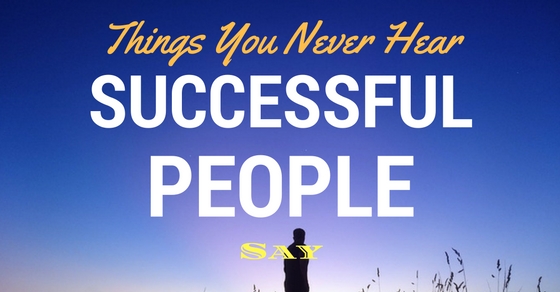 Words, as some people say, are loaded pistols. Once they are expressed, they cannot be taken back. Therefore, knowing what to say and where to say is essential.

In order to ensure your success, you need to remove certain words from your vocabulary and avoid speaking them to either yourself or to any other person. Here are some words that successful people avoid saying:

Successful people always find out options, no matter how difficult the circumstances they face are. By saying that you have no choice, you distinguish yourself as a victim, someone less powerful than the situation that you might be facing. The use of such words is likely to weaken your determination.

In contrast, successful people always try to find out the possibilities to come out of the situation that they might be facing. They are well aware that by claiming and exercising the power to choose, they are taking the first step towards the fulfillment of their goals.

These words are not only demotivating but also pessimistic and tend to lower the confidence of an individual. People who are successful know that there are innumerable roadblocks on the road to success. Barriers may impede their progress, but never stop them.

They either have to remove the obstacle or find out a plan to get over it. Words like ‘’can’t’’ or ‘’impossible’’ never loom in their minds. Rather than giving up under tough circumstances, they come up with alternative ways to get the work done. They emphasize on words such as ‘’ I am sure that there is another…,’’ ‘’what I can do is’’ and similar words that reveal positive alternatives.

Words such as ‘could’, ‘should’ and ‘ought to’ stands for feelings such as blame, regret and fault finding. People who are successful don’t live in the past. Nor do they regret any decision that they might have taken at a point of time in their lives. What makes them stand apart from the rest is that they regard failure as a learning experience that helps them gain.

At the same time, they refrain from using words like ‘You could have’ or ‘You should have’. Accusing others or finding fault in others adds to negativity. It can never help one in achieving goals. A more understanding tone can usher people and coax them to cooperate.

People who are successful help others to succeed. Try to be a mentor to co-workers who are junior to you. If you are asked a question by your boss, colleague or a customer, it means that the question has some relevance. So, as a team player, your main goal should be to find an answer.

Even if it is not a part of your job description, by saying this you are likely to show an unprofessional attitude. So, if you come across any unreasonable request at your desk, give a positive reply.

Speak up your emotions in a manner that is friendly and acceptable to others. By giving such a response, you can show a cooperative attitude to help others. This will help you to create a positive image at your workplace.

Someone else got a raise, you didn’t. He was recognized, but you were ignored. Some other department received funding, but yours didn’t. Partiality happens on the work front across industries on a daily basis. People who are successful are proactive rather than reactive. Instead of complaining and showing anger, they take necessary action. They document the facts related to the issue, build a case and present a valid argument to the person or department. Rather than complaining about existing problems, they try to find solutions for the same.

Successful people are always open to new ideas and finding more effective ways of doing the same thing. A leader stands out from the crowd because of his novel ideas. This is the reason why managers give more precedence to employees who are flexible, can think out of the box and solve problems.

If you are not open to new ways, it means you are inflexible. Keep an open mind and make sure your words also reflect your open-mindedness. You must ask doubts if you have queries. It is good to ask about the pros and cons associated to the plan.

Successful people refrain from using words which are meant to judge, abuse or speak ill of others. Irrespective of the circumstances they are exposed to, they avoid making negative or judgmental statements. They are not judgemental about people in their job. If there is a genuine matter that has to be brought to the attention of the management, then they approach the management with well documented facts & consideration while maintaining neutrality. Speaking ill of others only reflects immaturity. People who have a successful track record in their career choose their words very carefully to state facts and avoid using foul language.

This one-man army type attitude may suit the hero of any action film, but it doesn’t really work in the workplace. You might feel that you can handle an entire project on your own, but teamwork is a must. Being able to work with others as a part of a team is the key strength of any good leader. You are not likely to reach the top position in the organizational hierarchy if you are too individualistic.

One must not go overboard and promise something as achievable unless it can really be achieved within 60 seconds. One must never say that something can be done within a ‘’minute’’ as it creates a negative impression. The major reason why the specific task may not take long may be due to your professional experience and acumen. But by saying that it will take ‘’just one minute’’, a person is creating an impression that he is not serious about the task at hand.

Faultfinders never progress in life. People who have worked in the corporate world for a couple of years know it is a bad idea to find faults. It is never possible for a person to fully agree to all the company’s plans and strategies. Disagreement is sure to happen at some point of your career. Therefore don’t express your disapproval bluntly. It can cause resentment and ruin your image too. You need to be cautious while expressing strong views.

People who are unsuccessful at their workplace are often intimidated by their task list. The wise, on the other hand are those who know their aim and know how to get there. Most importantly, they know the project details really well. Finishing a task list is not one of the parameters which is used to judge success. Creating something outstanding for one’s company is also very important.

You will never hear a successful person say ‘don’t forget the details’ or ‘these are important steps to completion’. Only unsuccessful people focus on the means. The ones who succeed maintain their focus on the goal. They will never stop their teammates from trying new ways of achieving the same goal.

Have you come across people at your office who have an unusually high opinion about their own ideas? That is a mark of selfishness and that reflects a person’s inability to follow the team objective. It can also prove to be disastrous. People who like and promote their own ideas are seriously detrimental to the success of a team. They think about building a business by never accepting any idea from others. Cooperation also helps in the growth of a company.

This is something that people commonly say when they don’t want to work as a part of a team. Human beings evolved and survived because of their ability to work in a team. Anyone who compromises on this trait will never succeed.

Such individuals are not open to new ideas. Projects come to a standstill and fail when people within the team refuse to accept the viewpoints of others. When someone comes and states that he doesn’t require any type of input from anyone, the person has already decided not to be a part of the team’s success. This is not an acceptable attitude in a prospective employee.

Make sure you are careful with your words. You must not include such statements in your professional interaction if you really wish to succeed.