These highly creative people deserve such level of attention and respect because of their creative intelligence and smartness. There are several difficult things which are considered as an impossible task to be done, but these creative personalities get it done within seconds. 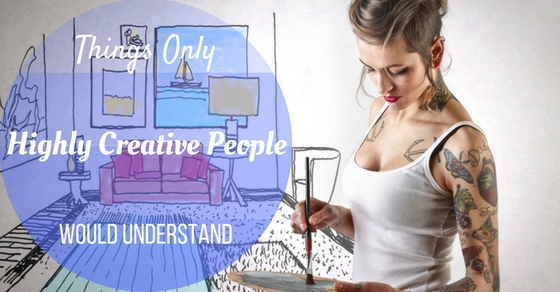 1. They question the system:

2. They inspire themselves using silly things:

As it has been seen in the childhood stories and school books, most of the brilliant minds made their experiment successful using regular things which comes and goes around on a normal life. Similarly, these highly creative people inspire themselves using least expected things in their life.

It is possible that people get bored of stuff which they do every day without any much effort as it has been a practice. But it is not that same with highly creative people as they consider things boring if they understand or solve it easily. Therefore, most of the time highly creative people keep switching their interest as per its level of risk and understanding. Moreover, it is not easy to keep them occupied with small things.

5. They are child at heart:

7. They are advised to get a real job:

Most of the people don’t believe in a field of work which involves creative stuff. For example, working as a dancer or a painter or a musician and much more. These mentioned career lines are considered as one of the unstable career options, one can ever choose for their life. And that is why most of the creative people are advised to get a real job instead of wasting their time on creative stuff.

9. They have an active mind:

As compared to a common human mind, a highly creative mind can be considered active than a common human mind. They try to complete the task assigned to them in a completely unique manner. And that is why their minds run comparatively active than a normal mind. Therefore, people who never feel tired of stuff they do are considered as the active one’s, but highly creative people are considered active because of their unique work they deliver.

10. They believe in themselves even if others don’t:

As explained earlier, some people consider their work as a waste of time and it is not secured. But highly creative people believe in what they do. They work really hard to get what they want in their life. And that is why they never give up on their dreams which ultimately will get them to their final goal of life. Therefore, it is quite clear to everyone that all the highly creative people deliver their work with complete honesty and creativity.

11. They are busy in their own world:

As their work involves most of the creative stuff and keep themselves around such work, that is why they just lose the track of their time with their constant work. Moreover, creative people take things more serious than others and that is because their dream to achieve something creative takes a chance of risk. And, these risk elements need to be handled with hard work, dedication and creativity.

12. They work with impossible:

It is possible that some of the things in one’s life get so messed up that they lose their hope of doing it right. But on another way these highly creative people find their own opportunities in these highly stressful situations without even a streak of sadness.

13. They fail in satisfying themselves at first:

They are considered as their own critic and that is why it is not that easy to satisfy themselves. Therefore, it is quite difficult for them to convince themselves that they did a real good job with their work.

14. They are proud and humble:

It is not easy for anyone to be proud and humble at a same time. But these creative people have never shown off their pride in front of anyone. And they always try to behave at their best with everyone.

15. They try to be different from the rest:

It is easy to find a creative person from a lot of people. And that is possible by the way that only creative thinker try to finish their work in a complete creative manner than the rest of the people.

16. They expect their own space for their work:

Most of the creative personality believe in spending more time with them than with others as to avoid distractions. Therefore, all the creative people work in a closed environment where nobody ever would try to trouble them with their work.

As it is clear with all the above mentioned creative things to do, most of the creative people believe in doing their work with complete honesty and creativity. And to make that happen, they need focus and determination of handling any sort of difficult situations.

18. They are sensitive by nature:

As they believe their heart more than their mind, then it is quite clear that they are more off sensitive than a strong person. Here sensitive does not mean that they are physically weak. Actually, these creative people value their emotions than their actions.

19. They are always positive:

20. They appreciate happiness and sadness:

21. They treat their work more personal than professional:

People who live a corporate life understand that professional and personal lives are two different things and should not be mixed. But the problem with the creative people is that they take their work more personal than professional. And eventually this kind of behavior messes up everything for everybody in their life.

22. They believe in intuition:

Having an intuition about something which matters to people in their life is a common thing. But when it comes to creative people most of the intuitions comes true as they appear for a second in their life.

23. They are addicted to creativity:

It is like a disease for them that once they believe in doing stuff in a creative way, then it is never possible that they can deliver their work in a normal way. Therefore, creativity and innovation can be pro and sometime it can be considered as one of the cons for a creative person.

As a matter of fact, it is true that all the creative people hate boundaries which limits them to complete their task in a certain manner. Therefore, people need to stop limiting creative people of their work.

As people with creative eyes believe in doing their thing in a complete creative way, there is an amazing quality of their work and that is their ability to observe things. Because of this observing talent, these creative people deliver their one of the finest work of art.

There is a possibility that all the creative people demonstrate or execute their work with complete honesty and creativity, it is quite clear that because of their creative nature of the work they experience all sorts of new things in their life.

28. They believe in perfection:

Most of the work executed by the creative people are delivered with the complete level of perfection. But following perfection in one’s life is not an easy task as it seems. Because of the habit of doing stuff in a perfect manner a creative person might keep repeating work until its done.

As it has been explained several times that all the creative people follow their heart and with that level of passion over one’s work, a person always can be considered as a one who loves and respects his job especially when it is creativity based.

30. They are brilliant with their imagination:

These highly creative people are considered very intelligent with the way they are. Moreover, their approach towards least expected things makes people wonder about their brilliant nature of imagining things.