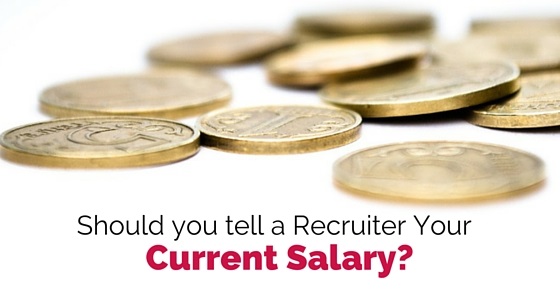 1. The type of company you have worked earlier:

The salary packages that companies offer varies from one company to the other. The financial plan of the company and its economic conditions actually decides the upper as well as the lower limit of the salary to be given to the employees within the organization.

So, in such a case, you can frankly tell about the salary status in your next interview. Even if you had lot of ability, that was not your mistake of getting a less salary, so, never feel shy of telling.

2. Starting from the scratch:

One has to start from the scratch i.e. from the very beginning and if you are a new joinee into a job i.e for the first time you have entered then you can tell freely about the salary you used to get as it will give others an idea of how and from what amount you started and if you have much potential, you may even get more than before through the next recruiter. So, thinking like this also, you can tell a recruiter your current salary.

3. During the professional conversations:

If you talk, it will portray that you are singing your own tunes regarding the salary package you get. So, do not create such an impression in front of others.

4. During the job interviews:

When you are there for any job interview, you may have to go through this phase of answering such questions, so at that time, you will have to make a smart choice. No one will put you in a point blank situation to answer such question, so it is completely your choice. If you think that answering such question truly will help get you a good job next time, then you must go ahead. So, it’s upon you, how you cater to such a query.

5. Probing in the depth:

Some recruiters have the habit of probing in depth of the person’s life, instead of focusing on the potential of the person. At that point, you must dodge the question and bring the focus back on the abilities and the potential a person carries.

Such queries, you will have to avoid of your own and no one will come to take a stand. So, it is essential to take the positive and also think positive about the question and then answer.

There are no norms in the court of law or we can say there are no legal proceedings if you do not wish to answer the question. No one can pressurize you to retort to the query and also neither the recruiter can be prohibited to ask such question. So, neither of them is under any forceful situation, hence it is advisable to think before you speak to the recruiter.

7. To increase the remuneration:

If you want to rise from the below level, you will have to share your salary information. This is because, you will not tell the recent salary, you may have to stay at the similar status in the next job too as the other job recruiters would not know about your previous status. So, in many cases you will have to take the risk of explaining the salary you received.

You can deflect the whole conversation in a manner of explaining and putting forth the accomplishments had during the whole course of your job, For Example your salary was x but your bonus that you get were y, so you can tell about the achievements that you had due to the bonus you used to get. This way you will be honest and also you will prove your right too.

If your salary is very less, then also put forth the truth and even if it is more, then also do not lie. Stay true to yourself as well as them because the people whom you are answering are not kids, but experts in their own field. So, do not try and create embezzlement with the queries you put forth or it will lead you in trouble of may be losing the job and also creating a wrong impression.

It is never wrong either to tell the salary you used to get or to ask for the amount you can get further. Companies and the heads want to know the truth and starting the work with truth is always fine and never considered bad. It will be better to say everything frankly instead of beating about the bush regarding such an important topic.

12. Know what company is ready to pay:

You should ask what the company is ready to pay for the job and during this you can smartly answer such a question. This will help you know two things at a time one, what the company’s expectations are and what remuneration the company will offer you and second thing is that you will be able to tell your previous salary status. So, also know about the company’s point of view regarding the matter.

13. No, never tell anything to an outsider:

The outsiders should never come to know about the current salary you get. They may poke fun at you regarding the less salary that you get, but you will have to yourself take a stand or it will affect you at large. Being diplomatic is need of an hour regarding such queries.

14. Postpone until you are offered a salary:

You can postpone the question to the recruiter until you are offered the salary. So, do not tell anything, do not mention of your own anything regarding the salary until it is asked by the recruiter themselves. Let them first offer you the package and then move ahead with your own opinion and also telling them the past record of your salary packages.

16. To present your hardworking nature:

Telling a salary you used to possess earlier also shows your hardworking and down to earth nature. If you were working at less salary for long, it means you were somewhere satisfied and working hard for the purpose that you may attain at some or the other point in life. So, it also reflects your nature. For this purpose also you can tell your current salary to the recruiter.

So, above are some of the reasons based on various situations, on which one can answer this question. It entirely depends on your choice whether you want to tell as it is one of the personal choices that a person does. Telling the salary is not bad as it at times raises the chances of increasing the very next time, seeing the potential you possess and at times it may also prove harmful to you. So it may also depend on the situation as well as the requirement i.e. the need of doing that.