Want to work in an Apple store someday? Wonder what’s it like to work for apple? If the answer is yes, then you will love reading this post. In this article, we are going to share with you the fun secrets that every apple store employee has always been hiding from you.

Yes, they are very funny to read and we promise you are going to laugh out loud. Those who have wanted to learn some cool stuff from them, this is your choice. So without delaying any further, let us get straight to the point! Here are some of the biggest and topmost secrets of apple store employees we bet you haven’t heard of before! 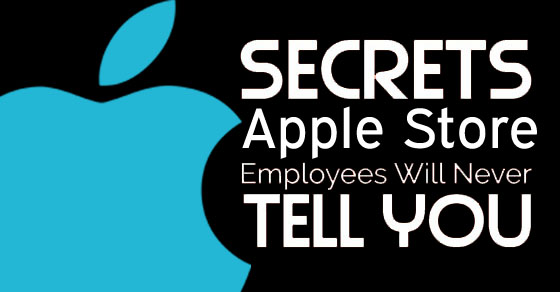 Some people will come because they do need some kind of help with their storage but do not know about the correct Apple ID or even password. Experts have said that if they could figure out what your password is then what is the point of even keeping one.

So always remember to save yourself some amount of time and make sure that you have some idea about the login information before you are about to head towards the store.

2. They hate it when they see you are using the store for your purpose:

A second thing most apple store employers do is that they dislike seeing you use their gadgets for your personal uses as if it belongs to you. Some people make some phone calls or simply because they want to change their wallpapers.

Some people have video chats with their friends on Skype for around two hours. Even some would come and start writing his music for an upcoming album. If you want to use an Apple store for your business, then please sign out of facebook. There are a large number of people who forget to sign out and that could get you into trouble… if you know what I mean!

3. They always know when you lie:

Another thing is that these guys can always tell if you are lying. If you are at an Apple Store, lying is the last thing you should be doing. Some people have spent over five years working in Apple and have a good idea about almost every job.

It doesn’t matter if you have dropped a phone into your toilet or had the screen replace somewhere else, they will get to know later.

4. If you behave rudely, be prepared for the consequences:

An apple employee can be your friend or your enemy depending upon the attitude you have. Apple store workers will always choose to become your closest friend if you behave the right way. If you end up behaving like a jerk, then don’t expect them to treat you well. They will always treat you well if you want them to. Just make sure you are behaving well.

5. That the problem is always you:

Most of the time the reason behind why some phone and apple devices don’t work is that you don’t let it happen that way! So many people don’t even know how to use an iPhone and they tend to ruin batteries and buttons and wonder what went wrong.

Even though they know that you have screwed things up, the guys from the Apple store will never let you know. They will fix things normally like they always do and give it as usual without letting a single person know.

6. They love to check out new vintage devices:

It is of course not always about the newest version of the iPhone or even just an Apple watch. Some so many employees have met their fair share of getting the same old gear of apple.

The products which have been made for more than 5 years will always be seen as a vintage product and things that were discontinued for more than seven years are considered obsolete. The apple store employees can order some parts of these gadgets but they don’t mind giving their opinion.

It always goes to show the kind of support along with the viability of the users of Apple, especially those who use products that are around 12 years old. People have been using them still and love it.

7. They have seen all your private photos:

Another thing Apple guys have always seen but never told you is that they have all seen your private photos. Not that they keep searching for it on your computer but when they are transferring all your old pictures to a new drive, they kind of end up seeing all of them and even though it is slightly difficult for them to watch, they don’t have any complaints.

After all, who would be upset after watching naked pics? Nobody! LOL. But still. When you are sending your lappy for repairs, remember to remove the naked ones.

8. Getting that shirt is a big opportunity:

Getting a job in any Apple Store is not very easy. People say that it is much easier to get into the university of Stanford than get hired at Apple Store. Of course, just one spot can get over a thousand applicants.

Therefore people who have got a callback, have been through several rounds of intense interviews and if they end up getting the job, there will be several weeks of training before you have been released into the ground for an Apple Store that too in an unsupervised way.

Of course, when a newbie is finally considered ready, he will always be treated like any other employee and be given that Apple shirt. But of course these shirts can never be worn outside the store and the reason is obviously because of branding purposes.

When things come down to landing a job in Apple retail, then what matters the most is referrals. The closest and best way in which you will be able to guarantee an interview is that you can know a person who can be referred by another person who works with apple.

Apple tends to take these things quite seriously. They will pay all of their employees a bonus even if it ends up becoming several thousands of rupees.

Apple tends to trust those employees who know that a person can become a good fit for the culture of the company Some workers tend to carry things around by using some referral cards. In case they have encountered a waiter who is exceptional and does a great job as a salesperson, they will hand the card over to him and ask the person to apply.

10. They are enthusiastic people:

The guys at Apple are always very enthusiastic and tend to clap a lot. When the employers start with their training, they always go through the ritual where they always have to clap for someone.

The moment a new employee walks into the room, these guys at the store will always get up and clap for them. It is always a good feeling to welcome someone new. This is not just a way to show that they are supportive but also show that you are going to be treated the right way in this new environment and that we guess is pretty good news!

You will probably not hear this from anyone but these guys care about you and are waiting to fix stuff for you. After all, when they do things for someone, they are not just helping themselves but are also helping others.

They are increasing the name of the brand and making a good impression of themselves. People who work for apple are very hard working and always make it a point to ensure that all your work has been completed and that you never have to face a problem.

12. They never step out in their Apple T-shirts:

Apple store employees never step out with their Apple t-shirts or rather they are not allowed to do so.

In case they do, the guys have always complained that they end up meeting people who want to fix their stuff. Plus it gets very annoying for these guys to always deal with your queries when they are on lunch.

They also find it very disrespectful. So if you ever spot one just in case, never ask them to help you out. Just visit an Apple store instead. That would be better.

Another secret about apple store employees is that they have to work extremely hard. Some of them end up working 40 hours a week while the others work for a minimum of 35 hours.

Especially if you belong to a higher position, you will be pushing it to 50 hours. So if any of you want to apply to one, make sure that you are ready to slog your butt because they will make you push hard. But the good part is you will be making a lot of money.

14. They lose their mind when it comes to transferring:

A lot of people tend to lose their minds when it comes to transferring data. And it is quite possible because they have to transfer so many things. You should keep your stuff saved somewhere else before sending it for repairs.

They even have a good idea about what they have in some of the devices. Plus dealing with such nude pictures all the time surely doesn’t feel great. So do them a favor and get rid of all the naked pics.

15. You will not get a discount by asking for it:

You will never be able to get a discount by simply asking for it. The employees don’t like it either when you ask them for one. So don’t make the mistake of even doing it.

Discounts are only available if you get lucky and if they want it, they will give it to you. So just wait for your turn instead of asking for it directly. In that way, you never might get on.

Shocked, aren’t you? So were we, when we first discovered the shocking secrets of these apple store employees! Well, now that you know some of them, you can become far more alert next time you walk into the apple store.

After all, their secrets are no longer secrets. Everyone knows about it! So if you have liked this post and would like to give some of your feedback, feel free to drop a comment in the box below. In case you have a few questions in mind, let us know about that as well. We are eager to hear! On that note, good luck.