Usually, there would be high-quality interns who work free for any business but that status is very rare today. Interns are important for an organization as they bring in fresh and innovative ideas; elevate productivity, and spread about your business to other people around.

They work as interns and turn into full-time employees in an organization. The organization should dedicate time to training the employees.

An internship payment is still considered as a grey area, so let’s glimpse on should interns be paid and the amount to be paid, also the average pay for interns is to be analyzed. 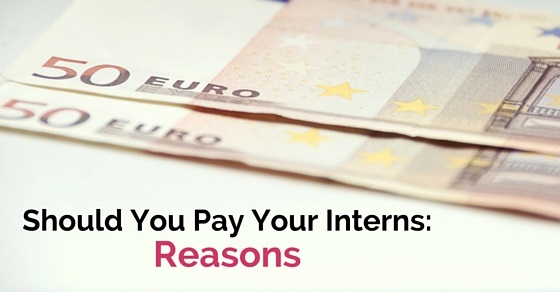 1. The amount for interns:

According to the national association of college and employers (NACE), an insight into the intern’s pay for their work is depicted. While students get closer to their terminal degrees, an enhanced internship wage obtained.

An example is that college senior gains more amount than a freshman which would be $17.57 versus $13.91 per hour. In the same manner, a higher degree would gain a higher wage.

The latest intern compensation report from NACE states that a master’s degree hourly wage is 35 percent more than that of a bachelor’s degree wage which is stated as $21.93 compared to $16.21.

3. Time of work and payment:

At times of summer internships, interns work full time and earn a considerable amount of money. In the same manner when its school time the working hours for interns should never be greater than 15-20 hours a week. The time commitment is something important which makes the internship amount.

Paid or not Paid Internships:

The law relating to interns mentions that unpaying interns averted from replacing current employees and not allowed to do non-educational work and ad hoc. Unpaid interns are ones who usually experience many enhanced standards in terms of experience and educational benefits.

The six factors developed by the department of labor’s wage and hours division help decide if the individuals are interns which are determined under the Fair labor standard act.

The interns through work in the actual operation of employees considered as an educational environment, the main intention of an internship for the benefit of the trainee and hence payment thought of.

The interns are ones who work under close observation and do not replace regular employees. The employer though his operations imped offers training to the interns. Once the internship completed the employee not offered a job quickly. These entire reasons make up that an intern is to be unpaid for internship programs.

Interns catch hold of best internships for plenty of reasons such as building their resume, developing their skills and to get into like a full-time employee. Employers take advantage of this chance and do not pay the interns.

But there are few good companies such as Google, Facebook, Amazon, black rock, and more which pays the interns about $5,100 and more. In the same way, the oil and gas company giants pay $6,506 as salary for interns. These details listed by Glassdoor.

The NACE 2014 internship report and co-op survey state that many employers decide to hire interns and pay only 98 percent of them.

There is an argument that many interns do not receive well and survey reports show that average hourly wages for interns for bachelor’s degree is $16.35 and for master’s degree it’s $22.50.

Some abundant candidates are willing to work free, is there a necessity to pay the interns? There have been some surveys and a report which has opened up that paying a wage for interns brings in a lot of benefits. The main aspect is that when wages paid, the number of applicants applying for an internship enhances.

When interns paid they are more likely to turn out as an employee and also stay for a long time with the organization.

The risks with paid interns are always lower. There are lots of risks associated with internship lawsuits such as Fox Searchlight and Conde Nast. Unpaying interns can indulge in bad publicity and hence leave you under the risk of being sued.

Companies expect the right fit and quality candidates when they change from unpaid to paid interns. When paid interns are selected there is an elevated quality of the candidate, the speed in training is also made quick and more. When payments are made, quality and top applicants are obtained for an internship.

When internships are not paid their training is something similar to school training. There is a little direct benefit for the interns from the organization. When an intern is not paid, then he may not replace the work of an employee in the organization.

The employer would also not be able to derive any advantage from the intern. The next aspect is that the intern would not entitle to employment. In the same manner, the intern must also be aware and know that they will not receive any wages for internship training.

They can be perfect candidates for future hires in the organization. When unpaid interns considered they resist and stay for only three months. They require more motivation and lack accuracy in their work. They do not make a complete contribution to the organization and hence paying interns is the right choice as confidence develops.

1. The average pay for interns:

The average pay for interns varies according to the degree and hours they work. In that aspect, a bachelor’s degree freshmen can earn an average internship salary or an hourly rate of $15.05 with an average co-op hourly wage rate of $15.17.

Apart from payments, many employers offer their interns with compensation packages. Some of them are relocation assistance, a housing stipend and more as compensation. Other employers who offer compensations are social activities for interns along with holiday pay.

Apart from employers who make an average internship pay, there are tech firms and oil companies which pay the best for interns. With a survey that was made to find internships and top paying interns, there were few financial companies too which made a list. To attract the top talent of the next generation paying higher pay for interns is essential.

Hence the hourly wage rate for interns differs depending upon the company they work and also the degree they pursue. Unpaid interns are illegal these days as per the United States Department of Labor. Another benefit of paying an employee is that when interns are paid, many candidates obtain an internship.

They also can gain experience and find chances to get into as full-time employee which was found by research by the National Association of Colleges and Employers. They found and stated that 63.1% of interns obtained a job offer once they graduated.

By all this survey and explanation it concluded that paying interns is always the right choice which has been highlighted in varied scenarios. The data mentioned above is an example for interns to know that payments received and important for an internship.

Run through the sites and get a list of companies that pay their interns and look for such companies. For students who desire to get into an internship, apart from gaining industry expertise and knowledge, obtaining payments are also important.