Consumption of marijuana is never healthy, it is possible that the physician might be suggesting these marijuana for some other reason but always prescribe with the actual usage. Marijuana is one of the addictive drugs which can be called as a weed. But usage of marijuana in the workplace can make things worse and especially for people who deal with travelling or driving. Because the effect of marijuana stays in the human body from two to six hours. 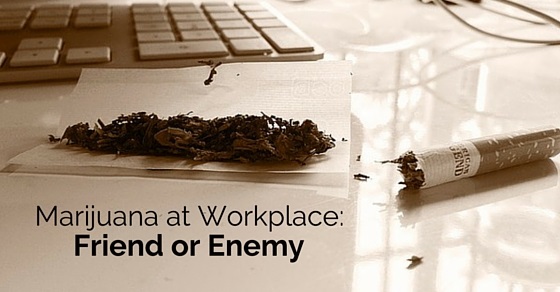 7 Effects of Marijuana at Work:

Marijuana is not a medicine and doesn’t have any medicinal effect on the human body. Marijuana can be little out of control if a person consumes it more than expected and here are some of the effects of marijuana in the workplace, they are as follows

If a person consumes it more than his / her limits in the workplace, then it will be difficult for them to deliver their duties effectively. If a person consumes marijuana during working hours and lets himself/herself be high, then it is even possible that the particular person might go out of control and he/she won’t be medically fit to perform his / her duties. Moreover, consuming marijuana in working hours is a legal offence. If anyone gets caught consuming such drug in working hours then there will be serious legal issues against them.

2. It relaxes the body and mind:

Consumption of marijuana or weed can create a certain kind of relaxation for muscle and nerves, but it is never recommended as a healthy element to the mind. If a person consumes such weed or marijuana during working hours, then it is possible that it will surely affect his / her working ability. Which can never be positive for that person. It only helps in relaxing mind and this kind of relaxation can ruin a professional career with a small mistake.

3. It helps to overcome anxiety issues:

Sometimes it is possible that a person consumes these weed or marijuana just for the sake of their anxiety issues. It’s true that marijuana helps to overcome anxiety issues, but it is also true that it creates internal issues which can be unhealthy for the human body. These anxiety issues trigger mental illness and eventually, it can turn a person completely opposite. These kind of changes are never beneficial for a person in the workplace.

4. It helps artist people to be creative:

If a person tries to consume such drug he can get high during his / her working hours, but it won’t be such a big deal with artistic people because they work in creative areas. These artistic people consume marijuana to be more creative. Consumption of marijuana relaxes the mind and eventually, it helps the mind to be in an imaginary state which creates imaginary elements.

5. It can increase hunger:

Consuming marijuana during working hours can also be embarrassing because of its one of the effects as it triggers hunger issues. Sometimes it is possible that a person who keeps him/herself calm during any kind of situations can go out of control, once they consume marijuana. If a person consumed marijuana during working, then it is possible that he/she feels hungry as if they have never seen a food for years. This can be little embarrassing in the workplace.

6. It can ruin professional and personal growth:

Consumption of marijuana can never be beneficial for anyone. It is one of the addictive drug which triggers unwanted issues in one’s life. As mentioned earlier, consuming such drug can be unhealthy and it will never be beneficial for anyone. Sometimes it is possible that having some kind of relationship with marijuana can destroy one’s personal and professional growth without your own notice. And that addicted person will be helpless to cope with these kinds of situations.

As it triggers a human mind it should be understood that a person consuming such drug will be experiencing some kind of memory issues. It relaxes muscle and mind and creates a certain kind of environment around oneself. A person consuming marijuana need to know all the side effects of such drug and it makes that particular addicted person to be dependable on that for the rest of your life.

Good and Bad effects of Marijuana in the Workplace:

As mentioned earlier, marijuana triggers memory issues. It means it blocks memory generation. It normally acts as a brain dead element. But it eventually came across as a memory blocker for a period of time. A person who is in a relationship with such a drug can prevent some kind of memory issues.

2. It messes with the balance:

Consumption of marijuana can trigger one’s balancing also. Balancing in the sense, a person loses his / her focus on certain things and it can ruin his / her personal or professional life. If a person consumes such drug during his / her working hours, then that person can lose his / her balancing ability and it can be considered working ability.

A person who consumes such drug can start experiencing some kind of psychosis inside him/her. These psychoses can be triggered by the constant degradation of personal and professional growth. These kinds of effects is always considered as a negative effect of marijuana in a working place. Psychosis is the mental state of the mind where all the mental elements trigger extreme effects on the human body.

Medicinal Effects of Marijuana in the Workplace:

As we all came across how much marijuana can be negative but here it is the part where a person can consider marijuana as a medicinal valued drug. It helps in preventing inflammatory bowel disease and it also treats epileptic diseases. This marijuana contains particles which can be turned in as health benefits for everyone.

2. It even treats cancer from spreading:

As mentioned earlier, marijuana has some of the particles which can be beneficial for some of the diseases. Most importantly, it helps in the treatment of cancer, and also prevents it from spreading which is very much beneficial for everyone.

7 Health Risks of Marijuana in the Workplace:

Consumption of marijuana can effect on the human body very extensively. Especially those effects which are delivered in the workplace. Marijuana creates impaired thinking ability. This is a very common effect of marijuana consumption, which can be treated easily. Therefore, to avoid such addiction one needs to make his / her mind calm and composed without any outside distractions.

A person who is very much addicted to marijuana can never be able to concentrate or focus on anything. It is one of the very common effects of consumption of marijuana. If a person needs to concentrate on certain things, then he/she must quite consume marijuana for the overall benefit of the human body.

4. No detection of senses:

Consumption of marijuana can turn a person into a handicapped human being. It is possible that a person who is suffering through late reactions are called as very slow learners. These effects can be prevented if a person starts cutting consumption of this marijuana.

Sometimes it is possible that a person who keeps him/herself calm during any kind of situations can go out of control, once they consume marijuana. It only helps in relaxing mind and these kinds of relaxation can ruin a professional career with small mistakes. But this consumption of marijuana brings a state of mind where all the quickness of the mind will be low due to excess consumption of marijuana.

Marijuana can be little out of control if a person consumes it more than expected. If a person consumes it more than his / her limits in the workplace, then it will be difficult for them to deliver their duties effectively, then it is possible that the person can lose his / her balancing ability and it can be considered as a low level of working ability.

To end this discussion, we would definitely suggest that marijuana is a drug which is considered as a slow poison which reacts over time without any external effects. Marijuana is one of the addictive drugs which can be called as weed and many more. Overconsumption of marijuana can also bring death and it will be very ugly. Therefore, to handle such kind of severe marijuana effects, a person needs to understand all the above-mentioned effects of marijuana in the workplace. These kinds of awareness can help people to be more careful in their work. Therefore, it is better safe than sorry and follows all the above mentioned to steps to be safe in their personal and professional life.