Attending interviews, and preparing for a stable future with complete job security is one of the most common things which people aspire in their professional life. And to start with that process of their new career, the candidate needs to undergo an important interview process which consists of questions and another screening process.

Moreover, during this interview process, the questions that present in front of the candidate can help those employers find out and analyze the candidate’s potential and check whether they are compatible with the job position for which they applied. 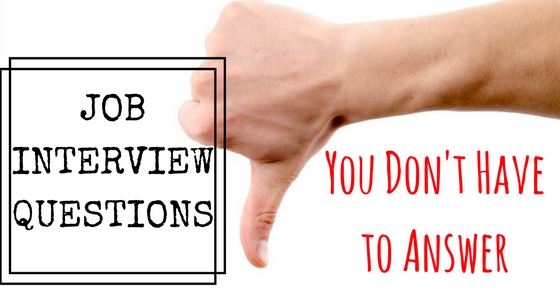 Unusual Interview Questions You Don’t Have to Answer:

It is a common thing in everybody’s life that they suppose to attend an interview, then get a job and settle down in their life. All these processes change the scenario of one’s life and to start the career, they need to attend an interview that can change their entire life instantly. But some of the interview makes some candidate nervous and that is possible if an employer asks them about their age which is completely inconvenient to the situation.

When asked about your age, instead of answering directly, assure the employer that you are at an age where you have procured a sufficient amount of experience and job related skills.

Also, highlight the achievements that you have accomplished from your previous jobs or state example where you have been an ideal employee for a corporation. This way, you present yourself more favorable to the employer and can increase your chances of being selected for the job.

Asking about their relationship status is a more personal question than a professional question. Therefore, the employer must not present a question regarding their marital status in an interview.

And even if the employer asks such a question, then candidates have a right to pass that question politely without disrespecting the employer. Moreover, it’s quite clear that being married or single has nothing do with the position that they’ve applied for work.

Try to dodge the question by asking back the interviewer about various jobs and career paths that the company offers to their employers. Try to divert the interview to your favor and try not to sound too desperate when doing so.

3. What religion do you believe in and practice?

It is possible that during most of the interview process, the employer favors those candidates who share similar spiritual elements. And some of the employers even present such questions that can be racist and uncomfortable for the candidate. And that is the candidate need not answer questions regarding their religion and beliefs as these things are more personal than their professional life.

Therefore, it is better for the employers that instead of asking religion question, they can examine a candidate’s potential for the job offer. When asked such a question, you could politely ask the interviewer, that how does your religion relate to the job position that you have applied for.

Also, views about religion vary depending on an individual’s perspective. So it is better not to answer such questions since you do not know what the main motive of the interviewer is when asking such a question. It’s better to either dodge a question or inform the employer that you’re not comfortable in answering such a question.

4. How many children do you have?

There are many questions in the list of an employer which he supposes to ask a candidate so that he can check the candidate’s credibility. But instead of such questions some of the employers ask questions about their marital status and about the number of children they have and much more.

These questions such as how many children do you have? Is a completely irrelevant one to the post they are offering to the candidate? Asking about a candidates’ family planning and arrangement is not a fit question for asking during an interview.

Some interviewers use these questions to measure whether or not the candidate fully committed to their job as more and more responsibilities at their household increase. Try not to answer such question that is more focused on the future of your family, try to steer the direction of the interview back to the job related topics.

5. What are your size and weight?

Many interviews usually ask you such questions to assess whether or not you deemed physically fit for the company. If the job you applied for demands physical fitness– such as for military position, then the interviewer technically has the right to answer such questions.

When asked such a question try to answer in such a way that subtly hints the employer that you are very much fit both physically and mentally for the job and that you can become a highly valued employee if given the chance.

6. Have you ever been arrested?

Some people find it very uncomfortable when the employer asks such questions, knowing that the candidate has experienced some sort of illegalities.

Therefore, it is quite insensitive to that employer if he asks such questions. And regarding this kind of behavior the candidate can file a case against that person without thinking twice or else he can directly inform that this kind of question is irrelevant for the interviews.

Instead, of answering such questions, try to inform the employer that you have passed the background check done by the company as a part of their preliminary assessments. This way, you are blocking the interviewer from asking further more questions relating to this issue.

7. When was the last time you used illegal drugs?

There is a possibility that when a person asks such questions in front of the candidates, they can find it offensive if they ever have addicted to such a level of drug addiction.

Therefore, it is completely unnecessary for the employer that he is showing interest in the candidate’s personal and past life which has been horrible. Moreover, while answering such questions the candidate can show behavior to the employer which can send him a message that it is uncomfortable and irrelevant.

8. Can we have your social media login details?

It is one of the questions in which an employer should not present it in front of the candidates regardless of any reason. Therefore, if an employer presents such questions, then it is the responsibility of the company to own up to the mistake made by one of the employers and try to figure out how to handle the situation by themselves.

There is a clear possibility that even the candidate can file up some charges against such behavior. Asking someone for their social media networking details is an unprofessional move done by the employer. Try to dodge the question and answer in an alternating manner, by stating that all the relevant contact details are present in your resume.

9. Which country do you belong to?

It is none of the employer’s business to know whether the candidate coming for an interview owes some financial debts to them or not. The employer may be willing to all financial details about the candidate if there is anything illegal in their personal and professional life.

Therefore, all the candidates need to handle such questions in a better manner and provide information regarding their financial debts to their limits which are not more than anything else.

11. Is English your first language?

Some of the employers even have a habit of humiliating the candidate with the way they speak. Most of the time these habits can be annoying when an employer makes fun of the candidates spoken English.

And even ask them about their school and college language source. Therefore, asking someone about their first language and if it’s not English then making fun of them is completely unacceptable and consider as a legal offense.

Try answering them in such a way that implies that you have enough control and understanding of the language to the perfect fit for the job position apply. This needs to answer subtly and should not sound defensive and irritated from the candidate’s side.

Therefore, the employer needs to ask questions which favor their company growth with the help of the candidate’s skills and talents. Moreover, presenting questions such as their drinking habits is a completely personal thing for the candidate.

13. Are you physically and mentally fit?

Asking someone whether he is physically and mentally fit can derive as a way where a person holds an authority to judge another person’s behavior. Commonly, most of the time people judge those people who behave little annoying and unstable in public.

And there is even a possibility that those candidates can tag as an unstable one. Therefore, it is ethically wrong if an employer brings up a question like whether you are mentally and physically fit to work.

Finally, to conclude this session make one thing clear that while attending an interview the candidate even has a right to not answer some questions that he feels irrelevant to the post applied.

If an employer presents the inappropriate questions, then the candidate has a complete right to stand against it. Therefore, if anyone attending an interview needs some help with their interview, then they can follow all the above discussion to clear out all confusion.