If you are someone who loves cosplay and want to know if there are others at your work who is a cosplayer, let us learn the ways to identify a cosplayer at your workplace. There are many signs which will help you to discover the hidden cosplayer from your colleagues.

You will have to be vigilant of the clues and once you locate your cosplayer kinsmen, you will be able to secretly lay out your influence. It is important to note that in a formal work environment a cosplayer might keep his or her identity concealed. 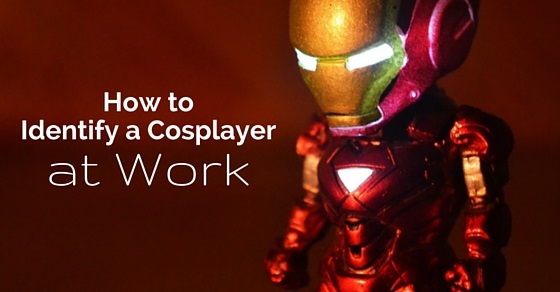 Fortunately, there are plenty of ways of discovering a cosplayer at your workplace.

What is Cosplay and Why Do People Do It?

Cosplay is the abbreviated form of two words that are costume and role-play. It is basically a performance art wherein the participants wear costumes and different accessories to embody a specific character. These participants are called as cosplayers. The sources of characters that people cosplay of can be of anime, manga, comic books, video games or cartoons, television series or live action films.

Since the 90’s, cosplaying as a hobby has seen a speedy boom, it has become a significant part of popular culture in many parts of Asia, Japan and in some first world countries too. Cosplaying events are a customary feature of fan gatherings as well as there are local and international competitions. You can even find social networks, blogs and several other media revolving around cosplay activities.

Cosplay is similar to any hobby. And thus the way people have fun engaging in their hobby is the way people feel when they cosplay. Just like any other hobby related events, people who cosplay meet in conventions to display their passion. Cosplayers get to interact with others who love to cosplay in such events.

4. For connecting with the characters they love:

Each has their own favorite movie character or role. This is the reason why absolutely anyone can take part in this art. Preferences differ and everyone can undertake what they like and are comfortable with. The way people love to watch their favorite characters on television, is the same way how some people find it interesting to dress up like the character.

There are people who seek attention by cosplaying. It is obvious that people will notice a person who is wearing a batman costume walking down the street. However, they are likely to receive positive attention from the fans of the character they are dressed as. Some even are fond of the attention they receive from the kids, when the kids spot their favorite hero or character. It is like the kids have met their superheroes or favorite cartoon or comic characters in real life and almost die to be close to them.

6. Most even do it for an escape from reality:

Dressing up like a character and looking like the character someone loves gives them the fulfillment of turning into someone they admire and although for a short duration becoming another person. It is like a short escape from reality for some into a world of their favorite character.

9. Some are in for the technical challenge:

Some of the cosplayers are passionate about the technical aspect involved in cosplaying. Creating the costume and building the props or accessories are some people’s hobby. Doing cosplay and innovating new things out of it is another strong reason why people cosplay.

Cosplay in the Workplace:

Some workplaces hold cosplay conventions for the cosplayers to attend and socialize. While cosplaying people get to interact more, socialize more and express themselves freely in such events. This is very beneficial for bonding at work with colleagues. Coworkers learn more about their shared interests with their colleagues and start feeling cooler about their workplace.

2. Common indicators of cosplayers at work:

The cosplayers at workplace would generally be seen in t-shirts symbolizing the character they are fond of, or are found talking and discussing about a particular book, movie or game or have miniature characters sitting on their desks. They may accessorize often to represent the character. They look forward to the workplace holding a workweek cosplay event.

1. Genuine cosplayer’s core is with anime or manga:

It is basically where cosplay culture originated. One can easily spot a possible anime cosplayer by listening to his or her ringtone and if it really is a Japanese song you hear, it is probably a theme song of an anime series.

Another method of recognizing a cosplayer is by noticing their fighting style. If by any chance there are fighting matches for team development, see if a colleague calls out names before their attacking moves or tries to power up or change their form.

Comic book cosplayers may be all superheroes-like and have a built up physique. You can spot one by noticing if he or she always comes up with backup plans, use backpacks, reads comic or tries to figure out if a superhero costume would fit around his desk.

Other dedicated cosplayers are likely to be found among gamers. For such cosplayers it is not just about costume role-playing but also about living the character from the big screen. To identify them, you just have to talk about gaming and you will know which coworker is passionate about games by their involvement in the conversation. However you have to be vigilant for not falling for newbie game players. A true passionate video game player is a possible cosplayer.

Cosplaying is closely associated with science and fiction and thus book worms can be potential cosplayers. Books have granted many fiction epics and the book worms are the one who go through the books meticulously to understand everything about the world described in the book. To spot these cosplayers you just have to look for coworkers who read during the breaks and are kind of addicted to their books.

Movie buffs are more like the covert members of the cosplay culture. They hold a rank and you will find it difficult to enter it as they are fond of their discretion. However if you manage to enter it, you will see the traditional movie characters like you have never envisaged them before in their real life representation. Sometimes it is not certain that a movie buff has to be into cosplay, you can gently introduce them to it.

Collectors also have a direct way of connecting to other collectors. They usually Google an item and find several sites to find other collectors. You can detect a cosplayer who endlessly searches for collectibles.

7. The one who accessorizes:

If you find an accessory or tattoo symbolizing a character or role in series, you know you have spotted a potential cosplayer. It is a very easy way to spot a cosplayer by looking for the obvious marks on one representing the character they love.

Cosplayers have a habitual impulse to quote from their favorite anime, comic book or superhero movie whenever they get a chance. You have to look out for common references that the person makes and you will find a cosplayer.

9. Certain hobbies to bring out a hidden cosplayer:

Some people are not aware about their cosplay skill. For instance, if you got to know about someone’s sewing skills, you can propose them to sew action figures or costumes for your cosplaying squad.

You can just introduce the person with the cosplaying world as they can be a useful asset for you and your cosplaying team as they can sew costumes or even help with the accessories for improvising.

10. A little stalking can never harm:

To spot a cosplayer you do not have to break into someone’s privacy. You can always go through your coworker’s Facebook, Twitter or YouTube profiles to find out their interests. Most of the cosplay community members are open discussers and so you can find them and connect with them in no time.

The above ways should be very useful for you to locate a cosplayer at work. In case you have knowledge of the coworkers who are cosplayers and trying to get into their group, then make sure you are not making any statements to hurt their feelings. You can even follow different tips mentioned above to connect with them.