In the 21st century we have entered into a technological age where people find it difficult to survive even for an hour without the use of their smartphones, tablets or laptops.

Practically all big companies out there have shifted to online marketing and advertising methods so owing to this reason; graphic designers are much in demand.

Your questions to ask at job interview should be direct so that you get an understanding of the work ethic as well as the graphic designer skills and qualifications of the person you are about to hire. 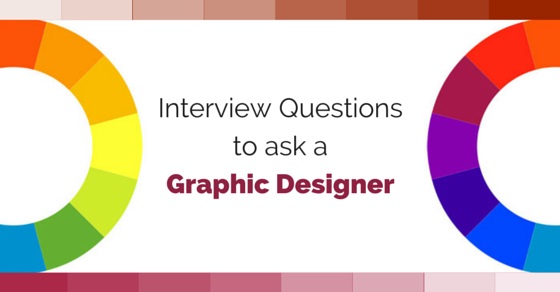 1. ‘What are your qualifications and do you have previous experience being a graphic designer for any company?’:

Though all details are likely to be mentioned on the resume of the person applying for the job it would always be best to break the ice by beginning with questions like this one.

However you should remember that qualifications are not directly proportionate to how well one can do the job.

Very often people with even the best of qualifications find it very daunting to work under pressure so you should make sure that you hire someone who can rise to the challenge and offer you exactly what you are looking for.

In addition to asking about graphic designer qualifications you should enquire about any previous work experience as well.

2. ‘If you were asked to design a logo for our company what would it look like?’:

One of the best ways to gauge how much the person being interviewed knows about your company would be by asking that person to design a logo for the company keeping in mind its policies and its target audience.

If you are able to get a quick and satisfactory response then you know that you are hiring someone who has prior knowledge about the company and someone who can think quickly as well as under pressure.

In this present day and age where there is cut throat competition between companies you cannot afford to hire a person who takes up a lot of time to come up with new ideas.

3. ‘What graphic design software do you most commonly make use of?’:

Everyone has their own likes and dislikes and it would be better to inquire about which software he or she makes use of most often.

Asking this question will not only give you a heads up about which software you will probably need to download or purchase if you decide to hire this particular candidate but it will also give you an insight into how skilled a designer he or she really is.

This is one of the vital questions about graphic design.

4. (If the candidate mentions the name of a very basic kind of software) ‘Isn’t this a very basic graphic designing software, Are you uncomfortable with using a more advanced one?’:

If the candidate makes use of a very basic kind of software that can practically be used by any regular person then you know that this person obviously isn’t very skilled or trained.

However make sure that you do not make the mistake of dismissing a talented professional simply on the basis of the fact that he or she makes use of a simple and amateur software.

You never know he or she might be able to create magic with the simple tools that are available at his disposal.

A question like this will allow you to know whether or not the candidate can upgrade to more advanced software if necessary.

5. ‘Are you comfortable being told what to design?’:

Graphic designing is not merely an art but also a science. Not just graphic designers but many creative minds out there refuse to work on ideas or suggestions that have been given by others.

This is not to imply that they are closed or rude, it simply means that creative thinking is a series of thoughts for them and they believe that they will not be able to do justice to any idea that is the brain child of another human being.

Some creative minds believe that their work should be products of their own minds and they should feel and personally experience whatever they are going to present on a blank surface.

Working with individuals like this could be inspiring but at the same time it could also be very difficult.

While hiring a graphic designer you should make sure that you hire someone who can accept constructive criticism and learn from his or her mistakes.

The candidates answer will give you an insight into his or her self awareness and levels of honesty.

In any event, sometimes it is nice to have a head strong designer who is unwilling to step aside from his or her beliefs.

7. ‘Do you prefer to sketch your designs first before converting them into digital format?’:

When you ask a question like this during an interview with designer you are basically familiarizing yourself with the way in which the candidate goes about working on a task that has been assigned.

If he or she answers in a definite and confident manner then you know that he or she has a definitive plan of action and has worked on projects before.

However you must appreciate the honesty of a candidate who gives a straightforward answer like, it varies from project to project.

As is often the case sometimes he or she might prefer to start off by using a pencil and paper and sketching the design while ideas keep flowing into the mind whereas other times if he gets an instant idea of design in mind then he can skip the primary step and instantly start working on the computer.

Different companies have different provisions available for the graphic designers which they hire where some companies prefer it when their employees make use of their hardware, other companies would rather have designers working on their own machinery, which they are probably more comfortably using.

This is a very important question to ask during the interview as if you are not willing to provide the necessary equipment and hardware and the graphic designer does not really have all that is required to do the job in a proper manner then there is no point going ahead from the interview to the next level.

By asking a question like this you know exactly where you stand with the candidate.

9. ‘Are you comfortable working in a team?’:

In any company, the graphic designer cannot be working independently and not in consonance with the rest of the marketing and advertising bodies.

It is vital to ask this question so as to ensure that you are hiring someone who can easily communicate and get along with other people.

Thinks might get extreme when your creative team or ad agency attempts to communicate its advertisement ideas to a person who is unwilling to be receptive.

Such difficulties often might lead to a dysfunctional and non cooperative team and will eventually lead to the loss of both time and money. So one need to be ready to work in a team for better results.

10. ‘Are our policies and standards in keeping with your own?’:

The complex process of designing graphics is a necessary part of all company campaigns and these graphics cannot be properly created without the expertise of a trained graphic designer.

It is important to ask right at this stage if this candidate’s views and thought processes are in keeping with that of the company. He or she will not be able to commit himself entirely to the company if the company’s views are in direct opposition to his own.

These are some of the best and appropriate interview questions you could ask while interviewing for graphic designer jobs.

In addition to this you could also include few most asked sample interview questions for graphic designers, pertaining to his or her creativity and planning procedure.