The basic meaning of the term alpha boss refers to a person in the workplace who shows or behaves in an intolerant way if any task or challenge comes in their way, thus showing a level of power as well as dominance in the workplace.

This is a situation that every person can encounter in the workplace from time to time and if they do not deal with it and continue with it then several problems may arise in the workplace and thus causing an imbalance in the organization. 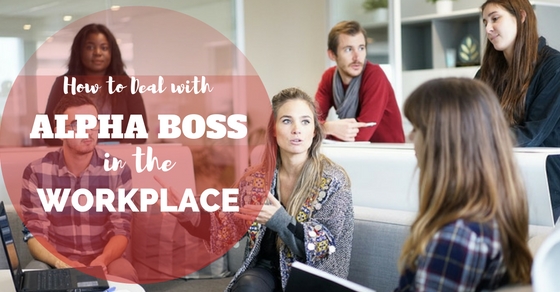 So it needs to handle as soon as possible and there are ways towards solving such a problem arising in the workplace which has been mentioned below.

Tips to Deal with Alpha Boss at Work:

One of the most important things that a person needs to remember at the start when they confront an alpha boss is that they need to build trust in the eyes of the boss and respect the boss so that at the earliest they can get to know the person at the initial stages itself. And also not face any problems for the current time and can work together in harmony in the organization.

2. Show Importance in the Workplace:

3. Stay Patient at all times:

Whenever it comes to gaining the trust of the boss and changing the negative behavior within, then they need to remember that this process is very long and they need to stay patient at all times as many setbacks and difficulties will come in their way. Having patience within is the best way towards finding a solution towards changing the behavior of the boss which will happen at the right time.

The person needs to know that their boss has all kinds of strengths within them and which sometimes not realize by them when they show their negative dominating qualities. There are some qualities that a boss may have within them which can improve their everyday quality of the work they do and can even help in improving their behavior.

5. Remind the boss of the qualities they possess:

Once the person has gained the trust of the boss and has understood all the qualities they possess within then they need to remind their boss from time to time the qualities they have such as their greatest strengths they possess which can lead to them thinking on their overall behavior in the workplace and can help them focus much more positively in the workplace rather than behaving in a negative way.

Even though whatever the situation may be in the workplace, the employee shouldn’t criticize the boss at any time whether it is in person or public. As this situation may erupt fast and the boss will retaliate in a very bad way insulting the employee and it is much worse if there hasn’t been any trust factor built yet with the boss.

7. Keep all challenges ready with a solution:

This will show the boss that the person or employee is willing to work together with the team and wants to keep improving the way the workplace functions which can even bring out a positive side of the boss.

When a person comes across an alpha boss they should realize that those people aren’t that emotional in comparison to others and they may not consider the present state of the person at times and will insult them or behave negatively.

So the person or employee should not take any of the actions of the boss personally and let it harm their life as it is necessary that the person acts wisely when this happens and doesn’t let it trouble their life.

9. Build and develop a Healthy Relationship:

The employee at the initial point needs to build up a strong relationship between the boss and themselves. Though at first, they may have to do tasks or follow orders which aren’t comfortable with but at least in this process the person can build in a strong relationship with their boss so that it can benefit them in the future and have less of a problem later on.

10. Provide feedback in the future:

When the employee completely gains the trust of their boss and has built a strong relationship with them, then during any kind of discussion or carrying out any kind of task they can provide any kind of necessary feedback which can refer to the matter that discusses at that time.

This kind of feedback can be straight forward in nature but not being rude or harsh at the same time which can lead towards changing the negative behavior that the person possesses.

11. Changing the attitude of the boss:

This comes in the advance stage of the job. When everything with the employee and the boss is working very well in harmony but still the boss has a dysfunctional behavior in the workplace, the employee can look forward towards bringing a change in the attitude of the boss so that they can recognize where they are going on in carrying out their everyday work and can help in bringing out a drastic change in the behavior of the boss for a long term.

12. Rehearse before speaking to the boss:

It is always advisable irrespective of whatever the relationship may be between the employee and the boss, that the person should rehearse to themselves or with a coach before speaking to the boss what they wish to speak or convey to the boss.

This helps them realize whether they mention something wrong and always speak the ongoing facts in the workplace to make aware of the boss.

It is well known at the moment that though the alpha boss wants the employees to simply follow certain instructions given, they mainly open to ideas from the others even if it’s not in their favor.

But all these ideas or any kind of talks to the boss needs to be done and presented appropriately so that there aren’t any misunderstandings between the boss and the employee and the boss may not feel that the employee is trying to overpower his decisions.

14. Gain confidence in the boss:

When the person starts to understand the behavior of their boss and knowing the way they are, they need to try as fast as they can to gain some confidence in themselves in the eyes of their boss.

When the person earns the boss’s trust he automatically becomes confident in confronting the boss regarding the behavior in the workplace and on seeing this boss also understands that the person or employee is trying to bring in some change within the boss.

When any kind of conversation is being gone on between an employee and the alpha boss, the employee should never be afraid to convey any kind of message to the boss or share any opinion to them.

If the person tends to show the feeling of fright to the boss, the person may understand that there can be no change expected for the future also within the boss as they may continue to act in the same way yet again and show their dominance in the workplace.

When an employee encounters an alpha boss, they need to start building a support network with people who are at the same level or are at a higher level in comparison which will help them in building contacts with them.

But this process should be done in a very cautious way so that the boss isn’t threatened by the way the employee is acting and the boss shouldn’t be aware of any of the other contacts that the person is building with others.

17. Support the boss at all times:

Even though the boss has supreme power in their workplace, but without any support from their employees, the power and leadership they possess are nothing. So it is important that when a person looks to dealing with an alpha boss that no matter if they have built some contacts with other people, they must always support the boss’s decision and if they have gained the boss’s trust then they can let the boss know where things are going wrong while discussing.

18. Always keep boundaries with the boss:

About how the boss behaves with employees, it recommends that there should always be a boundary between the boss and the employee. This helps the employee a lot especially when they expressing themselves or any kind of opinion in front of their boss so that everything stays under the limit and nothing that not means to speak, it says out.

If the person wants to challenge the boss’s authority in the office then they should see whether both of them have got that level of trust within them and how close their relationship is at the moment.

But if unknowingly they take such a step then the further consequences will be severe and the boss may retaliate in an unexpected way which can be defensive and insulting towards the employee.

20. Recognizing the need for a personal change:

Once the employee starts letting the boss realize what is being done wrong on the part of the boss with respect to the behavior and functioning in the workplace, the boss must slowly realizes that they also must try to understand that they too need a personal change within so that they can improve relations with their other employees. It will help in building their reputation and also improving their performance level.

So when a person in the workplace looks forward towards dealing with an alpha boss it is expected that influencing the alpha boss to change their behavior will take a lot of time and it isn’t an easy process.

But if the person uses the right ways in dealing with any ongoing situation then the relationship between the employee and the boss can be improved in the way where it isn’t so formal and the boss can change the negative attitude in him.