There may be some situation when we get fired, and we receive it very shocking. Because we never expect something like this is coming up. There may be certain valid reason for one’s termination, but the way it is demonstrated to us seems little blurry.

Generally, after receiving such letter or mail, we get caught in a certain zone, then it is up to the person to react in a positive or negative way. But the main thing is that after getting fired of certain workplace, how we can get a way to collect our stuff. 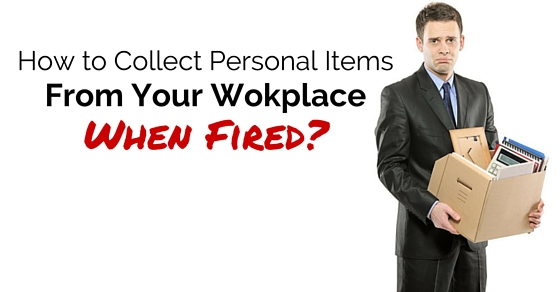 After receiving termination from the company, it seems little odd to go back to that place and collect our personal stuff left in that office. So here are some ways by which one can collect their personal item without any issues.

In some companies there are certain specific policy to deal with such issues of personal belongings of ex-employees. That terminated person needs to be prepared with the outcome of his / her visit to the office, and also to understand company policy first, so that there won’t be any embarrassment later.

Sometimes there may be certain rules that the terminated person is not allowed to enter company premises without any prior permission.

2. Communicate with the person who addressed you with the termination letter:

If a person is getting fired from his / her workplace, then he/she should be addressed to leave in with valid reason. And the person who is delivering such news to the fired person needs to make sure that he/she understands his / her reason for termination.

And that higher authority which fires that particular employee need to make him/her understand that how he /she can collect their personal items from the office.

One can get in deep trouble, if the person who got fired from the office behaves in such disrespectful manner. This kind of behavior can trigger the employer and the company to take some action against your act.

And it can even effect on your personal belonging which was left in your workplace. The company can legally posses all those personal items in the name of violation of certain rules.

4. Request your fellow worker to collect it for you:

Sometimes the company which fired you may send some notice to receive your personal belongings from the office and clear his / her space, and even the company mentions that if there won’t any response then the items will be discarded.

At that time if you feel not so good to reenter your ex workplace then you can request one of your office colleagues to collect it for you.

In this way one can collect their stuff to win – win situation to avoid awkwardness.

Every company has its own human resource department where all the performance and activities of employees of that particular company is recorded. Sometimes the company does not allow you to enter the office premises.

6. Be aware of your legal employee rights:

What if even the human resource department of the company refuses to help you with the problem then one can always count on legal official rights. One can file a case against the company for holding on to ex employees personal belongings.

This will seem odd but if the stuff you left at one’s previous office is really important then one can have all the right to get it back.

If things turn ugly with your previous working office, then one can always hire a lawyer to seek help. It only can go to this extent if the items which was left in the office is really valuable to the ex-employee.

If the company is deliberately holding on the ex employee belongings, then it is a legal offense to charge. In this case the ex-employee can file a case against such company. And also claim his / her personal items from the company with valid legal reason.

8. Demand a reason for his / her termination:

If you get fired out of no where don’t just accept the letter and leave. Once you hear that you are fired, take a minute and very calmly ask an employer for the reason for his / her termination.

If you feel the reason he/she is stating is valid, then you can leave the company with your personal stuff. But if the reason you feel is not valid according to the policy, then seek some help from your legal representative.

9. Read the documents before signing it:

After receiving the termination letter from the company, kindly go through all the terms and regulation of termination policy of the company before signing it. And while reading such legal document if you feel something regarding your personal belongings is needed to be updated or changed, then inform them about it and then you can proceed with your termination, only after being sure of certain change in the document, leave the company with dignity.

10. Be sure that you never violated any company policy:

If a person being fired has been violated some policy regarding the company well fare, then the company has all the rights to hold his / her personal belongings which entered the office premises.

The company can even take it to legal offense and hold his / her items to recover those violations and even the company can charge some penalty in the form of money to overcome that particular violation.

If an employee who was recently terminated from his / her job, can be sure of that before leaving, he/she has never caused any damage to the company property. If there is any damage caused on company property, then the company can take action against certain damage such as by holding his / her personal stuff or by charging penalty for property damage. Then one can release such items by refunding them the damaged property value.

If you have been terminated from your job, then make sure that you are calm enough to handle that situation. Even if you are mad at your employer, control your anger so that there won’t be any problem caused on your relieve and personal stuff.

If you turn yourself into an argument, then you may end up getting nothing from the company. So be very careful of what you speak.

And after receiving the permission letter, then only enter the office premises to collect your personal items. By doing this, an ex-employee will show respect to his / her previous workplace.

As mentioned earlier, being calm and polite can work things out in the best way. If you take your termination in a positive way then you will end up leaving the building with all due respect. By giving respect to his / her workplace, one can pay all his / her dues to the company.

In return the company can help you relieve from the company without any issues with the management. This is the best way to collect your personal item from the office after getting fired.

By being cooperative with his / her ex workplace, one can gain a little respect from the company for such great cooperation. This kind of behavior will always favor in every situation.

Even any problem caused by your behavior or your action, will be ignored because of your cooperating nature. An employee needs to leave the company with a dignity which he / she carried with them while joining the company.

16. Never use blackmail as a tool:

Sometimes an ex employee holds a grudge against his / her previous working place. If there are any company secrets that the ex employee is having then the ex employee will use it against the company to demand for it in return of his her desires.

An ex employee should never use blackmail as a tool, because this can provoke controlling behavior and also can end up in a very bad way. By being hostile enough, one can collect all his / her personal stuff from the office.

How to Handle Termination Swiftly:

Sometime after receiving a termination letter from the office, we leave our stuff in the office and when we approach the office they may create a certain issue to collect such items. Therefore, to avoid such situation, a person should make a note of things which should be considered after joining.

1. By having copies of your photos:

Generally, while joining certain company we start feeling at home working there because of certain kinds of attachment with the work place. That’s when you start bringing your personal photos which gives you strength and courage to face the world.

This kind of act can be appreciated if you stay remained in that particular office for a long time. So to avoid such relieving problem, one can use copy of such photos just to avoid future complications.

2. By not bringing personal pets:

There are certain people who bring some personal pet to the office to make themselves feel at home. It is not bad that one wants to feel at home in the office, but it is not appreciable if the employee takes such advantages of company premises.

For example goldfish or other fishes. By avoiding such things one can at least relieve from the office without any disturbance between the company and the employee.

Bringing religious stuff to the office is only appreciable if it can be handled in limits. Sometimes employees bring photos of religious gods to the offices. And if someone touch their religious photos disrespectfully, they react in a very violent way.

So to avoid such tension one can at least be practical before joining and bringing any personal stuff to their office or workplace.

Sometimes when you get fired, one may take it in such a negative way that he / she may lose control on their thoughts. Those employees will be notified to not to let them inside the office premises.

And if they enter the office premises without permission then there will be consequences for such acts. This fight or difference between employees and the company can go to the extent that the company raises their hands on the terminated employees valuable belonging.

To end this discussion, I would state that things keep changing their color and origin according to the external environment. Therefore, instead of behaving in a violent way after receiving the termination letter, one can at least think before doing anything stupid.

Being practical can help you overcome some situations which seem silly to you. And by following above mentioned ways, one can at least collect his / her personal items from their office when they fired. Be nice to everyone because you never know what’s going to happen next.