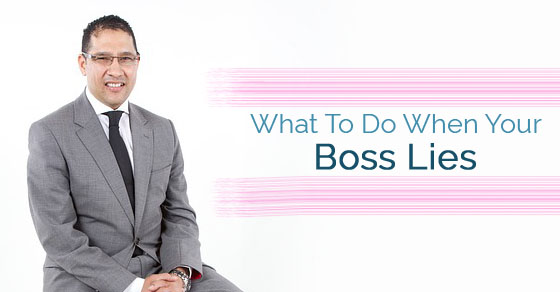 Sometimes it happens that in an office, an employee experience a certain kind of behavioural difference of your boss. It may feel strange to understand why the employer feels so insecure about his / her own employee. It may be possible because of the authority he/she is holding on to or just because of attitude issues.

But the truth is that when an employer or a boss who has been so nice to you lately suddenly shows a change in behaviour is not usual. There might be several reasons for such kind lies and attitude issues.

When Your Boss Lies – Ways to deal with the situation:

The reason for the constant lying from your boss is that he/she whoever your boss is trying to replace you with another person. Or else it may be because of some personal issues with himself/herself.

To find out such a situation when a boss starts lying to his / her employee, there are several ways and they are as follows.

1. Understand the intentions behind your boss’s behaviour:

When a boss starts behaving strange, strange in the sense when he/she tries to instigate you or ignore you or lies to you. At that point of time, it is necessary to know the actual intentions of your boss behind all of these changes.

Sometimes it is good to find out such things because there may be a possibility that a person who is your boss is being fishy and trying to trick you into something really bad and it is better to be prepared before anything happens.

2. Handling effects of such behaviour:

When a boss starts lying to your face and denies to accept his / her lie, then it is time to confront him/her with the proof or evidence. And it will definitely help an employee to handle such behavioural effects as easy as possible.

10 Best Ways to find out if your Boss is Lying:

To find out the reason behind the behavioural changes of one’s boss or constant denial of lying, a person can rectify some of the signs of change in boss’s behaviour to make that he/she has been lying to an employee and they are as follows.

When an employer starts lying about certain things it is obvious that he/she is planning something against that person or employee. It’s not different to find out that someone has been lying to you, but it feels weird to get to know that all these years that person who is an employer or a boss is scamming an employee from so long time. But it can be stopped if an employer tries to explain the reason behind such betrayal.

2. Insecure of employee or subordinates:

The boss can be possibly feeling a threat because of the successful career of his/her employees or subordinates. This may be one of the reasons for the layer of lie created from the boss to De-motivate his / her employees.

In a working place where one works for hours and expecting a certain kind promotion for the work one person delivers, is very normal. But sometimes it happens that the employer or the boss of the company on their employee’s demand ignores with a lie or a fake promise.

It is not necessary that an employer needs to deliver fake or empty promises to his / her employees in order to keep them quiet.

4. Blaming others for their mistakes:

A boss sometimes behaves as such a way that it may seem very awkward. Mostly the official environment seems like a boss environment where the boss controls everyone in the office, but it is not necessary that all the employer behaves in a same manner.

There is some kind of bosses who believe in degrading his / her employees and blames them for the mistakes which he must have committed. And it is possible because that may be an employer trying to give some reasons for his / her actions.

5. Management skills will be very poor:

If there is any possible conflict between the employees then a boss needs to involve such issues to solve their differences because a working place is like a family where one have to support others work for the sake of the growth of the company.

But the bosses who lie constantly can never handle such situations in a positive manner, but he/she may take advantage of such situations and cash it for the benefit of his / her personal agenda.

6. A boss may won’t protect his / her employees from the higher authority orders:

A boss needs to be a person who can be very approachable in the office, but it doesn’t happen all the time and because of that it seems as an employer is not protecting any of his / her employees from any kind of impossible requests of his / her company authority. This kind of behaviour of a boss can cost him/her in a very negative way.

It is possible that in an office every employee expects something from the employer, but when it happens you get to know it is a fake promise. At that point of time, an employee may feel awkward to continue their work in that company.

7. An employer or a boss keeps you shut or distant:

It means that whenever there is an involvement of that employee and it is necessary to know his / her opinions of employees, at that particular time a boss may take in charge the opinions of his / her employees which is considered as a negative behaviour from the boss.

It may be possible in such situations when an employee tries to express something for the benefit of the company and the employer or a boss keep ignoring him/her and his / her opinions on important decisions of his / her company.

A boss is a person who cannot afford to take a leave from his / her official duties and it is very necessary for the employees to know whether the employer or the boss of their company will be available to them during critical official situations.

9. Never involves his / her employee where ever they are necessary:

A company runs because of the hard work and skills of an employer and the employee as well. Therefore, while conducting company meeting it is necessary to understand that all the employees of the company are also a part of the company and they have a certain right to be in a part of such official meeting and communications.

And instead of uninviting them to such meetings it is better to invite them to know about their opinion on the growth of the company.

10. A boss secretly trying to replace that employee:

And not just that it is also possible that a boss has a certain personal issue against that employee and to fulfil his / her revenge against the employee, the boss is trying to replace his / her position.

What Should You Do When You Know Your Boss Is Lying?

Having a great workplace to work helps you increase your productivity in a better way. We all usually spend most of our time at our organizations along with our colleagues and leaders. This helps us to build a relationship with others and also make us more social.

At the workplace, we experience different types of emotions like laughter, sadness and sometimes even anger especially when somebody is lying. Lying at workplace questions your relationship among employees. But what if you find your boss is lying.

This can even shatter the trust factor between the employee and boss, which is irreparable. The action of such a kind from your boss can question his deliverables in the future too. They include the company’s present status, discussion about hikes and promotions, getting newer projects from clients etc. This can even result in affecting employee morale.

As an employee, one must be able to handle all such issues effectively so as to prosper in the career front. Here are a few ways on how to deal with a lying boss,

Working with a toxic boss is a tough task. Though there are few things that you can learn from him, but the price you pay for the challenges you might face is definitely high. Positive leadership quality is a rare trait that you cannot expect from everybody.

So whenever you are encountered with such a feudal brained leader or boss, you need to play clever and work efficiently without giving him a chance to catch you. The fear that such toxic bosses spread makes the employee demoralize and unproductive.

Now if you want to identify whether your boss is one such type, you can check for their characteristics. Here are a few traits of a toxic boss.

How to Expose a Liar Boss?

In an office when a boss tries to act really weird against one particular employee and that employee who is being targeted is experiencing a kind of negative behavior from his / her boss, then an employee need to confirm his / her doubts with valid proofs or evidence and plan a way to expose all the intentions of their boss and there are some steps to follow to deliver such activity, as follows,

1. Try to communicate with the HR:

While having trouble with the behaviour of your boss, an employee needs to try out some solution for the sudden change of behaviour from his/ her boss.

At that point of time when an employee is sure of the reason behind those behaviours, then the first thing an employee needs to do is that he/she should try to communicate with the HR team to explain them all the issues with a valid proof against the boss.

When an employee finds out the reason behind such behaviour from his / her employer at that point of time an employee needs to seek help from his / her company union or other government agencies or authority to make sure that the intentions of an employer or a boss are being noticed. By this kind of process an employee can maintain his / her position in that office without any issues.

While searching the reason behind a boss bad behaviour and to punish him/her for all of their behaviours, an employee needs to start documenting all the evidence against his/ her boss.

This can help an employee at that point of time when an employee seeks help from government agencies. By collecting proper documents, an employee can expose his / her boss for being fake all these times.

Therefore, before planning any kind of exposure an employee need to gather all the relevant evidence and witness to make the case stronger.

To end this discussion, we would say that a boss needs to be a person who can be very honest and committed towards his / her work and duties. But sometimes it happens to see that all bosses are not the same and there are some kind of employer who really can turn an office into hell. And to make sure that happens, an employer tries to deliver certain lie in front of his / her employees.

Therefore, to find out that the reason behind such behavioural change of his / her boss, an employee need to understand all the above-mentioned steps and try to follow them all to get all the answers.

“What Can you Contribute to the Company?” How to Answer