What is Conflict Resolution?

No matter what kind of organization you are working in, conflicts are bound to rise at some point of time. Conflicts are the troubles, problems that arise while doing our work. Conflict resolution process is a procedure of resolving conflict at work. There are several reasons for conflicts today. It could start from psychological differences to having different opinions on the same topic or even something like power imbalance.

When conflicts are not treated with care and effort, they tend to erupt violently. If you own a small business venture, there is a higher possibility of ruining the entire business altogether if the conflicts get worse day by day. However, conflicts in organization are never permanent.

In fact, if you follow a couple of effective conflict resolution techniques and ideas, you can definitely save your company from facing death. In case you belong to a very well established organization and are putting up with difficulties at work place, you should definitely consider reading this article. Nonetheless you will be helped. 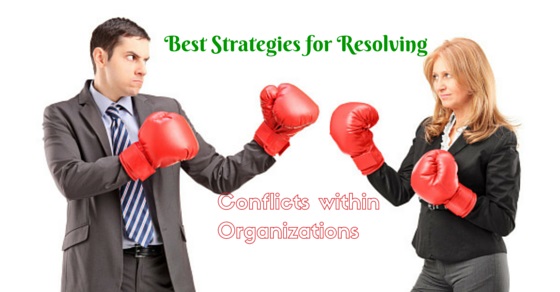 Effective Strategies for Resolving Conflicts in the Workplace:

The following mentioned are few tips on how to resolve conflict and conflict resolution skills an individual should possess for dealing with and managing conflict in organizations.

One of the top techniques used by most organizations for solving conflicts is avoiding the idea altogether. This seems like a very decent idea to bring down the whole predicament. If you tend to look away from the conflict, pay less attention to it or better… if you procrastinate, the problem will itself go away.

People who tend to avoid conflicts never belong to a very high position. They come from much lower backgrounds. There are some places in which avoiding comes across as the perfect strategy to resolve a conflict and its escalation.

Not just that, when you look at a situation like it really doesn’t matter, you are actually giving them the idea that it doesn’t bother you one single bit. Plus this could also be a time where people involved in the argument can take their own time to cool down and get over the conflict altogether.

Collaboration is one technique that works when different ideas are given away by a group of people. The whole idea is basically to find someone who can give a solution to the problem that is out of the box and innovative.

Collaboration is also something that requires you to put in some time which is not always possible for all kinds of arguments. One example could be of a businessman. A businessman is always supposed to show some sense of collaboration with the manager in order to come up with excellent policies. But if they are making decisions concerning office materials, then time that is used on other different activities is ultimately not utilized.

In short, collaboration is a smart and simple technique using which you try to negotiate and understand the needs of the other party as well as state some of your own. This in most places helps and allows you to find the perfect solution to all conflicts

If you haven’t tried this technique earlier, then it’s about time you do so. Solving conflicts can be made much easier when you show some sense of compromise. This method allows both the sides to speak up and express what’s on their mind. Not just that, the teams are allowed to negotiate and reach a point where the conclusion is obvious. This can definitely help in settling the matter.

People who own businesses or handle big companies often use this technique as it favours the conflict situation. Even though this leads to losing something that is precious, it does help the company from getting saved. The best thing about compromising is that you get the opportunity to identify the problem and know exactly where it lies. This will also satisfy both the parties.

One style of managing conflicts that could be detrimental in the long run is competition. This occurs when the whole idea is to win and to make the opponent party give up. Competition is usually connected to power relationships or to make the other party understand things in such a way that the opponent party is easily influenced and agrees to it.

The only con that comes with conflicts is that it tends to create a very difficult and unhealthy environment. What businessmen do most of the time is that they keep this technique mostly for crises that ultimately engender horrible repercussions like layoffs.

5. Come up with new guidelines:

This should happen before both the parties are about to conduct a meeting with both the parties. Allow both the groups to express what they are thinking about and to be honest with their opinions. But since you are the boss, it is very important for you to share your guidelines and share your ideas too.

You should make sure that both the teams are satisfied with the outcome. Not just that, both should be able to focus on the crux of the problem. This will solve the problem right away.

As the boss, it is important to take some time off. You shouldn’t jump into a conclusion or make a hasty decision. That would bring your whole business to an end. Give yourself some time to think and contemplate. That would definitely help you reach a decent solution.

The problem with quick solutions is that they tend to do far more harm than good. And if you want to let your business survive for a longer period of life, you must let it survive.

Yes! It is important to give yourself some time but that doesn’t mean you take way too much of it. Once you have gathered enough information, allow both the teams to get together and review the whole issues thoroughly. This will help you understand the problem.

Once that is done, take a few minutes and act accordingly when giving the final verdict comes into the situation. No matter what you do, do not leave the situation in a limbo. That would make things worse. Deal before its way too late.

It is very important to keep the lines of communication open if you want to take care of a difficult predicament in the right way. In this scenario, both groups are allowed to just be who they are express things in the nicest manner possible.

Not only does it allow the teams to vent and let go of their frustration but also allows the real reason behind the problem to come out. You will actually be surprised when you see people be who they want to. Probably you wouldn’t have to intervene and the situation will be solved on its own.

9. Come up with strategies according to the situation:

There are a couple of important variables that help you to differentiate between different kinds of conflicts organizations put up with. Also it allows you to understand which strategies are most effective and in which case they are helpful. Time pressure tends to be a very crucial variable.

If you are going through a time crisis, it is important to use the technique of collaboration. But you have to consider relationship importance, relative power and issue importance.

Issue importance basically means the extent to which values and ideas are important during a conflict. Next comes the importance of relationships and how valuable it is to maintain a strong relationship with the other group.

Forcing never solves the problem, no matter what kind of a situation it is. Sometimes it does stop the predicament for a short period of time. But the way to solving a problem permanently is by influencing and allowing things to settle gently. What coercion does is that it allows the problem to resurface once again.

If you are emotional or very angry during these times, there’s a possibility of giving off a horrible impression. So in order to solve an issue, give up on the idea of forcing people into something.

When you are trying to resolve conflicts at work place, please make sure to use one or a combination of a couple of techniques. Do not use all of them. Also if you would like to maintain a healthy and good environment, make sure you don’t use the competition technique. However, it all depends on your intentions.

Nonetheless, all of these ideas are effective and should definitely help your company survive, if it is in jeopardy. It isnt as easy as the post entails but it is still better than not knowing what to do.

If you don’t have a clue on what to do, things would probably get worse in the future. Hopefully none of that will occur if you use the ideas at the right time. On that note, good luck! Also if you have some opinions to share, feel free to express yourself!