In the competitive world of today, you will come across a number of people who are not sincere to you.

You can find such people in both your personal and professional life, but rivalries are often seen to grow quicker in the professional world; the race is on as to who gets there first. 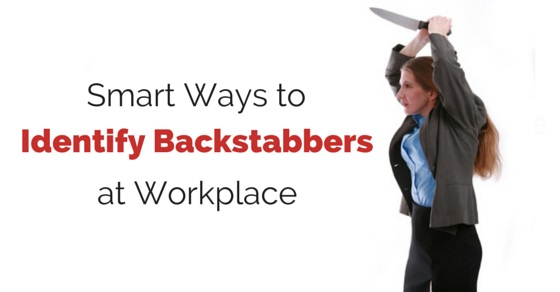 Working in an office environment is good enough, and you really do not need a person who backstabs you when you least expect it.

Not only backstabbing is dishonest, but it also affects the morale of the people and their job productivity.

But the million dollar question is, how to identify a backstabber

Does he or she have a label on their forehead saying ‘I will soon betray you’? Or

Will they let you know in advance before you are backstabbed by them?

Take a look at the following points that you need to look out for in the potential backstabber, and judge whether or not they should be trusted:

1. The One Who Flatters You Excessively:

Is someone giving you the super sweet talks?

This is the first sign of a backstabber. Backstabbers often excessively flatter you in order to cover up for their bad behaviour and schemes that they have going on behind your back.

It often gives them the thrill to puff up a person before they actually burst their trust bubble.

If you ever feel that you are getting a string of unnecessary compliments, then it is time that you watch your back from that person.

2. The Whisperer- He Or She Is Often Seen Whispering Around The Workplace:

Note the conversations where you see people or a specific person whispering at workplace. It is the most obvious and common trait of backstabbers that separate them from those who are sincere to you.

If they cannot talk about you on your face, then they will definitely do it behind your back. The reason is that they cannot lie about you in open so they prefer to do it when you are not around.

You are a person who has the calmest nature and stay as away as possible from fights and unnecessary quarrels at the workplace, but you always seem to get into a fight or a petty quarrel with one specific person; backstabber alert!

The quarrels may not even be about something important but always the silliest of reasons. Some people often like to pinch you so that they can sit back and watch you retaliate, and they find pleasure in doing this.

Any person who starts a fight and later calls it a ‘joke’ is the one you need to maintain your distance with.

4. Closely Notice The One Who Stops Talking When You Walk Closer To Him Or Her:

Pay close attention to the behaviour of your colleagues.

Do you ever feel that they stop talking or discussing as soon as you walk pass by them or go over to join them?

Keep in mind that a backstabber will stop talking immediately when he finds you closer.

A bold backstabber, however, would even smile and look you in the face when they are caught right their act.

5. The One Who Steals All Credit:

The world is full of people who love to steal somebody else’s credit and it often happens in the workplace too.

If you see a colleague who is being extra helpful with all your tasks, being too enthusiastic about your projects and working very hard to make it a huge success, then it is probably because they plan to take the entire credit for it later.

Look out for people who use ‘I’ more than ‘we’ when working in a team.

6. The One Who Acts And Behaves Like A Chameleon:

Such people are also seen lending a helping hand around the office, supporting and encouraging team members and what not.

But, they turn their backs on you as soon as they get their chance and throw the entire bucket of accusations and blames of failing in important project or a task on you.

7. The One Who Is Around Only When They Need You:

There is a person in your office who calls himself or herself your best friend but you only see him or her when they need your help; does this sound even the tiniest bit of shady to you?

People who hang around just to get your help and vanish right when you need theirs are never sincere to you.

You, being the innocent victim here, may take this as a sheer coincidence that your ‘friend’ is not available when you are in dire need of help but it is so not the case.

8. Notice Who Cuts Down Others When They Are Not Around:

Keep your ears open when a colleague talks and discusses things about other people, behind their backs, in front of everyone.

If you feel that he is belittling the other person, be it another colleague or a sub-ordinate, then there is a high chance that the same thing will be repeated for you when you are not around.

9. Always Listen To What Your Guts Tell You About A Certain Person:

You would be surprised to know how brilliantly your subconscious mind works especially when it comes to judging people.

Notice closely how your heart feels about someone; you will have a vague sense of something that is not right along with random flashes of doubt about the person in question.

But, most of the times, we tend to ignore our gut feeling and judge people on face value.

10. The One Who Affects The Productivity Of Others:

If you notice low morale and reduced productivity levels of colleagues, then you have a backstabber working his way into the minds of people at the workplace.

Backstabbers are full of negative thoughts, and they believe that it is their duty to transfer the negativity to others around them.

11. Keep An Eye On The Gossip Queen Of The Workplace:

Do you see a colleague who constantly flits from cubicle to cubicle, spending a lot of time chit chatting to others?

Of course, this person can just be someone who has a talkative nature but can you be sure that he or she is not gossiping with people?

Think of it as you have successfully identified the backstabber if you catch the gossip queen at your workplace.

12. The Most Encouraging Boss May Also Be The One:

Hard to believe but yes, it is true. The most supportive and encouraging managers or bosses can misuse their authority and steal the game-changing ideas of their employees and sub-ordinates without them knowing about it.

Who said backstabbers are only found amongst your colleagues?

Keep your mouth shut but ears and mind open to everything that goes on around you in the workplace. You can learn to trust a few when it comes to the career race.

What you need is to do a little digging of your own; find out facts and relevant information about the potential backstabbers and only then decide whether or not you want to add them to your circle of trust.

Maybe you think you are being paranoid because you have been backstabbed several times, but there is no harm to look out for yourself.

Author Bio: Skornia Alison works as a social media manager at an online service that offers essay help UK. When she’s not circling or tweeting friends, she loves writing blogs on career, leadership, mentorship and entrepreneurship.