This is so obvious that one will make mistakes while learning and even if you have learned, the mistakes are sure to happen. Doing mistakes are certainly not a crime but yes, if you fail to apologize for your mistake, that can be a matter of concern. So, if ever you make some mistake, whether it is absent from work, made a simple mistake, performed poorly in the task, working unprofessional or any other reason, do make it a point to apology. When writing an apology letter to boss, keep the following points in your mind: 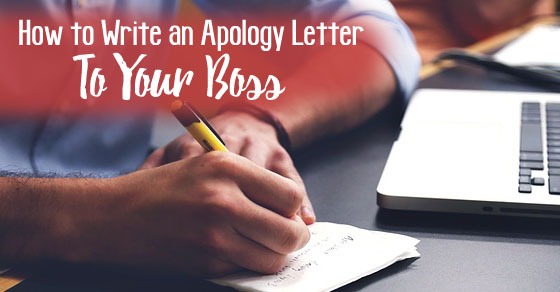 The following mentioned are few tips that help one to prepare a letter of apology.

Remember, you have to write to your boss and not your friend. So, when you start with writing an apology or sorry letter, write with a proper format of address, salutation, then the body and thanking you.

While you write, give reasons for what you need an apology. Also, be thankful to your boss for the acceptance of an apology when it is submitted.

Less paper work is needed nowadays in office. So, you also prefer not to pen down but to type the letter. When you type, make sure everything is at its place like the font is same throughout the matter, the size of the font and many other things should be taken into the account while writing a letter. This is because the professional style of working should not be left even if you are writing a single line to the higher authority.

The apology letter must not be written like the other letters. This is because you had committed the mistake and it is your duty to correct it anyhow. So, when you write, be very soft while using the words.

The words should not be harsh but very gentle and should reflect that you actually mean what you are saying. So, write by making use of simple yet apologizing words.

4. The letter should not sound authoritative:

An apology letter must not sound rude or authoritative. You should write in a manner that you actually felt wrong about what you did and it would never be repeated again. It should not reflect as if you are doing some favor by giving an apology letter.

5. Do not write essay length:

Mind it, it’s an apology letter. Although you might be feeling very sorry for committing a mistake, yet you need not be too sentimental and write two three pages of apology. Just be short and write direct by keeping the letter short and crisp.

An apology letter must say in the initial paragraph only that you actually are sorry and also whole purpose must be disclosed.

6. The language should be simple:

In a formal apology letter you do not have to prove how good you are at one language like English etc. So, adhere to writing simple English and do not make use of the complicated words.

The words will however reflect the knowledge you possess, but your aim is not to showcase the vocabulary bank to the boss. You are there to say sorry, so write very simple or a layman English.

While writing apology letter or a sorry letter, keep in mind that the reason you are stating is clear and straight forward. If what you want to say is not clear then there is no use of writing the letter for apology with heavy words.

The simplicity in the writing will assist the reader to relate the situation easily. So, be straightforward and let the reader be easy in understanding what you have written.

8. It is something very personal:

Do not announce to anyone that you are about to make an apology or you have made it. This is because it is something very personal so it should not be made public. It should only remain between the writer and the reader. Or you can say between the communicator and the final destination.

Whatever you write should be in flow. Here flow means the lines and the content should be in synchronization. Every line should sync with the successive line. The flow of the apology letter should feel the actual genuineness.

If you will write anything at any time, you will not be able to convey the actual message; also the reader will fail to understand. So, write with a rhythm and follow the flow of writing.

10. No need of the subject for an apology letter:

The hand written apology letter does not look good when you personally tend it to the boss. So, type a good apology email and send it to your boss.

Nowadays all the work in the offices are done through emailing. So, you should also prefer to email it to your boss instead of writing it down and handing it to the higher authority.

12. Do not offer permission to the reader to respond you:

You do not have to offer permission to the reader to respond you after reading the apology letter. If you are talking about your mistake, then just say that only. If you are really sorry for what you did then the response would be justified automatically.

The boss does not need your permission, of what to reply back. Giving the space to reply is all a whole different level of insult.

13. Your writing must reflect sincerity:

14. Being honest is one thing:

I tell you, there is no need of writing an apology letter if you are not being honest. Just write verbatim to what you did. Your honesty will somewhere lead you at a point in life but also remember the bosses are not poor performers, they very well know how to play the game.

Also, they could belt out the truth, even from the deep bottom hole, so it is better to speak the truth out rather than hiding it. Or you may land into trouble yet another time.

15. Give the reason why in the apology letter:

When you have made a mistake, you are entitled to request the forgiveness. So, do not demand it. Demanding is not your right when you commit the mistake.

You are expected to clearly request the boss for pardoning you for the mistake done. Also, you are requesting to the higher authority, so being down to earth is the need at the time of apologizing.

I am sorry but.. Should not be written like this. It simply shows that you are saying sorry to make it a formality and also refusing to admit that you made a mistake. This attitude should not be displayed in your writing.

Writing is an art and not everyone can write or express beautifully, but that does not mean you will fail to write a good apology letter. You just have to be very simple yet professional in your approach. Being professional will help you and you never know the apology may add a good point in your performance.

Before you submit the apology letter to your boss, go through it yourself so that there is no silly mistake left. If you feel like not being sure of whether what you wrote is right or wrong, just show it to any one of your close friends and correct the mistakes in it. This will help you in not feeling ashamed in front of the boss due to silly mistakes in it.

19. Give the plan to solve the mistake:

Not just apologizing is enough; you will need to give the plan for solving the mistake. Tell in your apology letter, the steps you would like to take so that you do not commit the same mistake yet another time.

Even if you do not know how and what to do, ask your boss only in helping out how not to make the similar mistake the very next time. This would certainly increase your credibility, trust and enhance the confidence in the eyes of the boss.

20. Mention, if you are late in apologizing:

You might have made a mistake a week ago and sending the apology after two weeks, then need not worry. Just mention that you are sorry for being late and continue explaining your mistake.

At least, mentioning that you are late makes the person realize that in actual you feel that you should have written to the boss on time. But anyhow, it’s fine some times. Also the bosses understand, after all they are not so hard skinned.

21. Write about how much you have hurt them:

This is your duty to realise that you have to write about how much you have hurt them when you did wrong.

You need to acknowledge that you know how much you have hurt them and you understand how hurtful it actually was. These kinds of things make the boss sure that you actually mean what you wrote in the letter.

You need to accept your responsibility about what you would do to improve yourself so that you do not repeat the same mistake. Admit the mistake openly in your letter and without keeping any reservation.

You might also have many good reasons for what you did, but this should not be the priority. You have to tell how much you realize that they have been hurt due to your actions.

23. End the letter in a graceful manner:

After you have mentioned all the vital details, you need to end the letter now. The letter should not end abruptly but with a gentle and graceful note. It should look like a sincere apology letter. The end should not depict as if you wrote the letter forcefully, but it should tell that you genuinely are apologizing.

Above are some of the ways by which one can write an apology letter to the boss. Writing a formal apology letter  for boss is easy but still some points should be kept in mind while you write. This is because, what you write may affect the boss again if it is not written well.

So it is better to follow the above mentioned tips while writing an apology letter to your boss and make yourself free from the guilt.