While setting up an office the first and foremost point that comes in the mind is how the setup would be so that the productivity and work environment remains positive for the workers. The new trend in today’s culture is the ‘open office layout’.

An interior design which makes use of a larger space and has more open space, minimizing the availability of personal cabins and areas is the basic idea behind an open office layout.

This concept when applied to residential perspective identifies landscaping without boundaries and fences in an open manner. 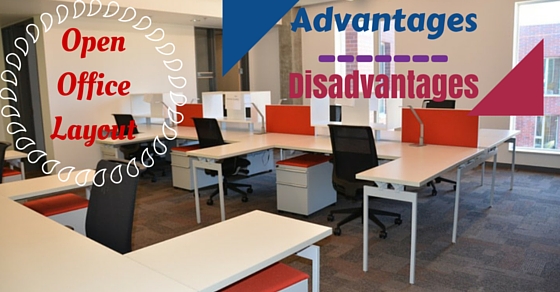 What are the Main Features of an Open Plan Office?

Earlier to 1950s, the open plan office had larger rows of desks and benches for workers to sit and perform monotonous work day after day. An enhancement in knowledge and expertise has changed the total concept in a fresh new style.

This open office layout style has brought revolution in the office interiors though they are equally imperfect as the closed layout is. In such a layout you will find the maximum use of open area with no or very less cabins.

The work station is shared by a number of workers sitting very close to each other and also sharing office equipment.

Let’s discuss about open office layout advantages and disadvantages in details as below.

Advantages of Layout Plan of Open Office vs Closed Office:

In an open plan office design, the minimum space is utilized for the work station by excluding the formation of separate cubicles which require the engagement of more money. This layout thus makes the design complete in less money thus proving to be more economical.

In a closed office setup, extra money is engaged in the formation of separate rooms with individual setup for each employee.

In this type of office plan layout, it is studied and found that the productivity of the workers does not get hampered much, even if the workplace for each individual worker is reduced a bit then also the productivity remains the same without much alteration in its results.

On the other hand in closed setup, less supervision and individual freedom of the employees may result to less productivity and more wastage of time.

Everyone being in the same place, not much time is wasted in communicating. In a closed layout there prevails a distant relationship between each employee, thus making communication more formal and time taking.

In a closed layout office there is hardly any scope of interaction between the employees and exchange of ideas happen very less in such a setup.

With this kind of office design it becomes easier for the managers and supervisors to supervise and take care of his/ her team in a more efficient way.

As all are closely situated, it is not needed to run from one office to another for the managers to have a feedback on any issue. This close supervision also helps in the eradication of problems much faster.

Close supervision lacks in a closed layout office set up. Employees are more care free in a closed setup where they avail full freedom from close vigilance inside closed doors.

The relationship and bonding between the managers and employees are improved with an open office layout since both can easily reach out each other whenever required thus improving the working environment.

If the workers are happy their productivity naturally increases. The relationship between employer and employee remains very formal in case of a closed office setup.

When the office is working on a particular project it becomes easier for the managers to track the progress as all the team mates are available under a single roof in a common space.

Disbursing information and getting feedbacks becomes easier since all are easily reachable. In case there is a need to organize a meeting they may pull chairs and have one rather mailing for appointments and scheduling for a meeting in a formal manner.

Things become easier and faster for execution in such a closely knit office setup. In a closed office setup, working on a particular project gets difficult since each employee is placed far from the other and bringing all in a single place becomes time consuming.

It is also economical in respect to the expenses to be made for air conditioning and electricity. As the whole office is in a common place a low budget centralized AC is enough for air conditioning the entire office thus lessening the budget to be incurred for a separate office space divisions. It saves money of the company in cooling and heating a single space.

In case of a closed office layout, framing the setup is costlier than that of an open office as there are separate rooms which require separate individual setup where none can share with the other.

9. Alteration of setup is easier:

In a private company, expansion is an inevitable option. It keeps on expanding its workers strength. In case the office is to accommodate more people with increase in employment, it becomes easy to alter the interior by only adding few seats and cubicle which turns out to be less expensive as well.

It brings a real headache in case of office expansion when it is a closed office setup. Here you have to restructure everything, breaking down walls and reforming them, thus engaging more cost in expansion.

In such kind of open space office it sometimes becomes very noisy when all employees start talking together at a particular time. It becomes more chaotic and all the workers being at a single space can hear phone conversations and personal conversations which can be very irritating at times.

Number of conversations happening at a time in this type of office can easily become quite noisy and stuffy, whereas in a closed office layout a note of privacy can be easily maintained with minimum disturbance.

In such an office setup there remains a chance of workers getting distracted easily when lot of noise happen at a time. This may in turn lessen the productivity of the workers as a whole as it sometimes becomes challenging to concentrate on a particular task in a noisy environment.

While with a closed setup, the workers are free to concentrate fully with their work inside their own small cabin till the work is done, thus maintaining the productivity level.

Security is also an issue in an open office layout as all are sitting in an open space and the cubicle setup allows no personal space for each employee to maintain privacy and security.

In a closed setup every individual is entitled to a lockable door wherein it is easy for them to maintain security, this facility lacks grossly in case of an open space office layout.

In case when there arises to make a confidential talk over the phone or a call to your home is to be made, you have to move out of your cubicle as there remains a very possible chance for your neighbour to overhear you, which you may not face in a closed office layout.

You may have to leave your seat and move outside to make a confidential call even though you are in between a very important work.

When the flu season starts, you can remain assured to get flu in an open office set up as infections and sicknesses get spread very easily and fast when you are sitting nearby to the infected person which is one of the main features of an open office layout.

This infection can be avoided in a closed office layout where you have a personal room and can maintain distance when required so.

6. Prone to collision due to difference in opinion:

Different people have different need and sensing in response to heat, cold and lighting. You may feel hotter than your neighbour while others may feel cold with a very little temperature decrease in the air conditioner.

In an open office layout this is very common to happen as all are not same. In a closed office setup you are free to regulate the air conditioner according to your need.

Those employees who are senior among other staff who deserve a separate cabin dignifying their hierarchy in the office are missing in an open office layout. This may create a feeling of being bogged down in them which in turn lessen their productivity.

In a closed office design, cabins are allotted on hierarchy basis thus giving due importance to every employee.

An open plan office layout really works well in case when a strong team work is needed to finish a big project. You may reach out to the team mates easily, you may disburse directions & information easily as well gets quick rather instant feedback on the same.

Calling of meetings are faster and less formal and most importantly communication is very smooth and effective in case of such closeness prevailing amongst colleagues.

When you have planned to start up a business you need to be very alert about the cost factor. If you want a cost effective office setup, an open office layout is a big yes for you.

You would be able to lessen the setup cost as it would be in a large space only with no separate partitions and all. There would be less expense in case of air conditioning and electricity which is a recurring cost and can really save a lot in terms of monthly expenses.

Moreover in case of expanding the office, this kind of setup stands beneficial as less time, less money as well less labour is engaged to restructure an open office setup.

From the emotional perspective in an open setup of office the sharing use of office equipment increases harmony and healthy work culture among the co workers.

It is not that there are more pros in an open office than closed or less cons than the other. There you would find people who support one kind and is against the other, but it is ultimately you who have to decide what best suits to your business purpose.

If the company has a healthy and proper management system, the business is sure to be a success. It would itself find the best ways to bring out the maximum from the employees.

It is true that the working environment matters too, but a good employer who could maintain balanced relationship with his employees is capable of bringing out the maximum output from the workers in any kind of situation or in any kind of setup, may it be open or closed or a combination of both.