If there is a debate on “Do Women Work Harder Than Men“, there will be no end to the argument. Some examples reveal that there are lazybones and unprofessional in both the genders.

The equal number of opportunities offered to women in countless professions today allow professional women to achieve their goals. There is a great number of successful women around the world and yet, jobs still are male-dominated in most cases. 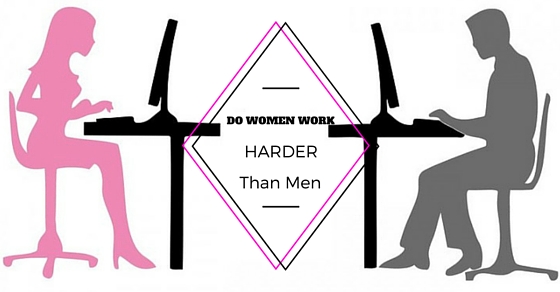 In many countries, while women do get an opportunity to prove themselves in their careers, they still have the added responsibility of looking after their households.

When one speaks of hard work, the household responsibilities need to be included. It may then be clear that women work harder than men a lot.

The division of work between man and woman was a practice from a long back. While it started as a result of what suited each most, as man evolved, it became a means of discrimination.

As men were the ones to hunt and gather, it helped them gain power. If men failed to achieve their goals, both would not survive. It is where the tradition of women as homemakers and men as livelihood earners began.

Here are some of the major challenges women face in their professional lives:

The cultural pressures are one of the major hurdles in a woman’s professional life. There are still many families that do not let women stay alone or away from the family.

Similarly, as most cultures expect the women to be the homemakers, they have to manage household work while handling responsible positions at the workplace. This becomes a great challenge. Women thus have to work hard not just in the workplace but also at home.

Most businesses today are great money and profit-oriented. That is the reason why excess leave during pregnancy and other medical conditions may not be considered by modern organizations.

This means that women forced to work even during pregnancy or other conditions to secure their job. While these problems do not arise in the case of well established and good companies, it sure is a great challenge in the case of small companies.

Many professions are still highly male dominated. It is really difficult for a woman to survive in such professions. Many men regard women incapable of handling such job roles. They have to undergo discrimination and office politics and perform better than others to survive in the profession.

Lack of physical strength still considers a weakness for women in many societies. These are places where women do not regard for jobs that require physical effort. These usually include core engineering jobs.

Reasons Why Women Are Better at their Profession:

There are always two sides to the same story and while women do face certain hurdles, they are still great at their professions. Women in the workplace are seen to lack more foresight, courage, and planning that make them ideal for several corporate professions.

Here we have listed out a few reasons that favor women in working more efficiently than men.

1. Effort To Prove Themselves:

In societies where women keep bereft of entering professional challenges, women work hard to prove themselves.

The main motivation for women in these societies is to disprove men who consider women inferior or incapable of doing the work or accomplishing success. This is a major driving force and helps women succeed in their careers.

2. The Fairer Sex is Better Learners:

Yes, it is true and studies have often revealed the fact that women are better learners than men. This helps women evolve in their careers and become better professionals. They can upgrade themselves to suit the latest needs of the market.

In this fast-paced world, better learning is an ability every professional need. Women gifted to learn better than men. This is surely an advantage that helps them score in their careers.

Women know to fall sick less frequently compared to men. This could be because of the better immune system that women possess. Another reason for the better health of the fair sex could a hygienic lifestyle. Women know to more cleanliness conscious. This helps them stay clean and prevent getting ill due to unhygienic living conditions.

Yet another reason for their superior health could be their health consciousness. They eat healthily and impart sufficient time for exercise. This helps them stay healthier than their male counterparts, helping them excel in their professions.

4. Estrogen in their Favour:

It revealed through recent studies that female hormones allow them to think and perceive things in a better manner compares to men. Thus, they are better off than people of the opposite gender while handling certain types of tasks. This helps them work harder and better.

Most women have a greater level of concentration than men. This is probably because men incline to enjoy adventurous outdoor jobs more than indoor jobs.

As women have traditionally remained the homemakers, they have finely tuned abilities that help them work within confined office spaces with greater concentration.

What the Research Reveals: Do Women Work Harder Than Men?

Recent research conducted to find out whether women work harder than men. The results of the study have been truly interesting.

The study conducted on 274 employees from different companies in the US. These were firms in a diverse niche like consumer products, financial service providers, educational institutes, energy, and healthcare. The study included 47% of male employees and 53% female employees.

The results reveal that women in the workplace work harder and longer than men. The researcher is sure to break many myths associated with hiring female employees in the workplace.

Apart from the results arrived, there was another interesting observation made during the research. It revealed that men worked less when there was a woman around, but the presence of a male employee did not hamper the performance of a female employee as much.

This result arrived at from a simple study. When a female researcher worked with a female candidate, the time duration worked around four minutes. On the other hand, if the researcher, as well as the candidate, were males, the duration of work was 3.6 minutes.

The most interesting fact noted during this study that the male work capacity reduced further when they work with a woman around. The total time worked with a female researcher and the male subject was 2.8 minutes.

Till now, many misconceptions and cultural restrictions prevented women from excelling in their careers. The scenario is slowly changing now. People have started accepted women in professional environments like never before. Favorable conditions are helping ambitious women ascend the success ladder easily.

Today, there are already many successful women out there in spite of all cultural issues and hurdles. When these also eliminated, the women sure will outnumber men in offices and organizations.

In addition to all this, the number of researches and studies have revealed many reasons why women are better employees than men. Statistics also reveal that more women graduating from different courses compared to men.

So now there is sure going to be a tough competition for men in offices. To beat the women, men need to work hard and prove their worth.