Women do have jobs. Generally, they do various kinds of jobs like being a housemaid, a nanny, or working in some small grocery stores.

As soon a girl is born, she is taught that her main duty is to be a loyal and good wife as well as mother. Her life is tied bound to various kinds of homely duties. 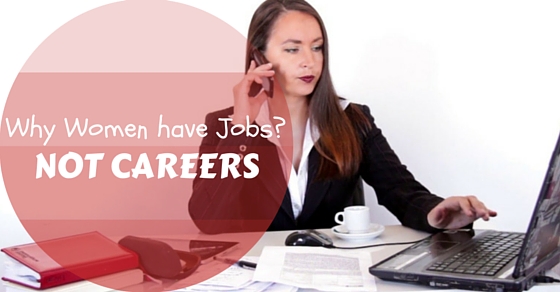 There are many things that do come in between her and her career. She does a job but without any success or identity in the society. Compared to men, a woman has to take a lot of responsibilities. Marriage and children do not come in between a man’s career.

Many people fail to realize that even today, in-spite of all the social awakening and change, a woman is still the homemaker. Most parents have great dreams for a boy child but for a daughter, they just dream of a good family life.

Very often, a woman succumbs to the social pressures and takes up the responsibilities the society imposes. That is the reason why, even though a woman gets equal opportunity, she cannot aspire for a great career in her life.

Jobs or Careers for Women?

Nature has selected the fairer sex to take up the responsibility of motherhood. She cannot get rid of this responsibility if she is married. This means that she will require to make the necessary adjustments in her career so that her family life is smooth.

A woman needs to take a break from their respective jobs as soon as she is pregnant. Sometimes such situations arrive that they even have to give up their jobs to take proper care of their family and children. Motherhood is a 24*7 job.

A mother has to give up her entire wishes and dreams just for the sake of her child. A woman might get a job later on but won’t have a career. This is a very big challenge that women face and most organizations do not have appropriate rules set in place to ensure that a woman gets an equal opportunity to make a career.

In most of the developing countries, women still have no right to decide about their career and future. Future still means marriage and family when it comes to women. This means that many women are fired to compromise on their career prospects in exchange of a good marriage alliance. Many parents still assume that a good marriage means a good future for their daughter.

When it is their time to set up a career even then they have to think about their future prospects regarding a family. Even if for a while they do have to think that if they enter into a corporate world or any other such professional area where maximum of their time is demanded, then it won’t be possible for them to do so. So the choice of career too depends on society.

The biggest problem with most of the women is that they don’t want to switch jobs to make a career. There are various fears that work in their mind. They fear that they would lose their financial stability. Women generally cannot afford to develop their skills regarding work. They have to look after their family and children and then go for their job. If you are a women, you have to be a multi-tasking individual.

In many societies, dowry and such other practices are still followed. In such societies, women do not wish to be the cause of any other monetary losses. Switching jobs for a good career may put the existing job and income in risk. Women won’t take such chances or risk the little income they have. They stay obliged to their parents for educating them and try to return this favour by fulfilling the wishes of their parents.

Women cannot afford to accept sudden changes because their entire family is dependent on them. They can’t afford to think about their career once they have a family of their own. Women with several years of experience in a particular field also hesitate to change their field. Later in life, if women consider to change their profession, they won’t be able to. Women always consider means of stability. A sudden change may not always lead to positive results. The family depends on the women for stability. So she would surely avoid sudden changes.

5. They have no other way out:

Very few women even get an opportunity to enter the professional world. Most women from backward societies are confined to the four walls of their household. The few who are allowed to choose their profession are taught to stick to the safest option. Their aim is always stability and not growth or promotion.

It’s true a woman doesn’t have a way out in matters of their career. So they stick to one particular field their entire life. They stick to such jobs which demand very less time of theirs. She shows the worst courage to forget about her dreams and live her life for her family.

Age may not affect men’s choice of careers or other career related decisions the way it affects women. When a woman is in her middle ages then she thinks twice before switching over her career. She thinks that it’s too late for her to change her job. The case is not so actually. The society makes her think that women grow old faster than men. This is one gross misconception that prevents women from taking significant career decisions in life in the right manner.

When there is no self-satisfaction in a job then how can a person live? If women cannot fulfil their own dreams and wishes through their jobs, then what is the point of having such a career.

She is only working like a dead person every day and struggling to earn money to feed her family. This is the case with most women out there in different professional circles. They are doing a job they do not like simply for monetary gains and stability. There is no dream or passion to add meaning to her goals. A woman who does not enjoy her job can never have a career. This is true in case of most women from backward societies.

A woman does not need to earn always until and unless there is a need. But she is overburdened with social responsibilities. Even if she is educated she is unable to make a career and just secures a job with just family left in her life. After she gets married, she has to take up responsibilities related to her in-laws and also take care of her husband’s needs.

All these social burdens lead her to not have a career of her own. She has to thrive on her husband sometimes and at another point of time, she does a job which does not define her. This is the case with most women in India. While they do support the house, they do not have an identity of their own. There are still families that do not regard it honourable to eat with the woman’s income. Even her money is not accepted to run household expenses.

While men are taught to have the drive and passion to help them succeed in their careers, that is not the case with women. Women do a job just for money and for learning new things. They do not have the time to learn as they have to take good care of their family members.

Women who aspire to make it big in their careers are often discouraged and demotivated. The parents of such career oriented women are worried that these women will never have proper family lives. So they demotivate these women further preventing them from achieving their goals.

Time to Alter the Scenario:

It is time we do something to change the situation for women and help them have bigger goals in life. This change will not happen in a day and requires a social awakening. People need to understand that both men and women have equal right to a good career and are equally responsible towards the family.

In each household, the responsibility needs to be shared equally among men and women. There need to be laws that ensure security in job during pregnancy. Women need to be encouraged to take up careers they enjoy. More awareness needs to be spread among people regarding diverse career options for women.

These are steps that can slowly and steadily change the scenario for women in the coming years. We need to work to achieve this goal.